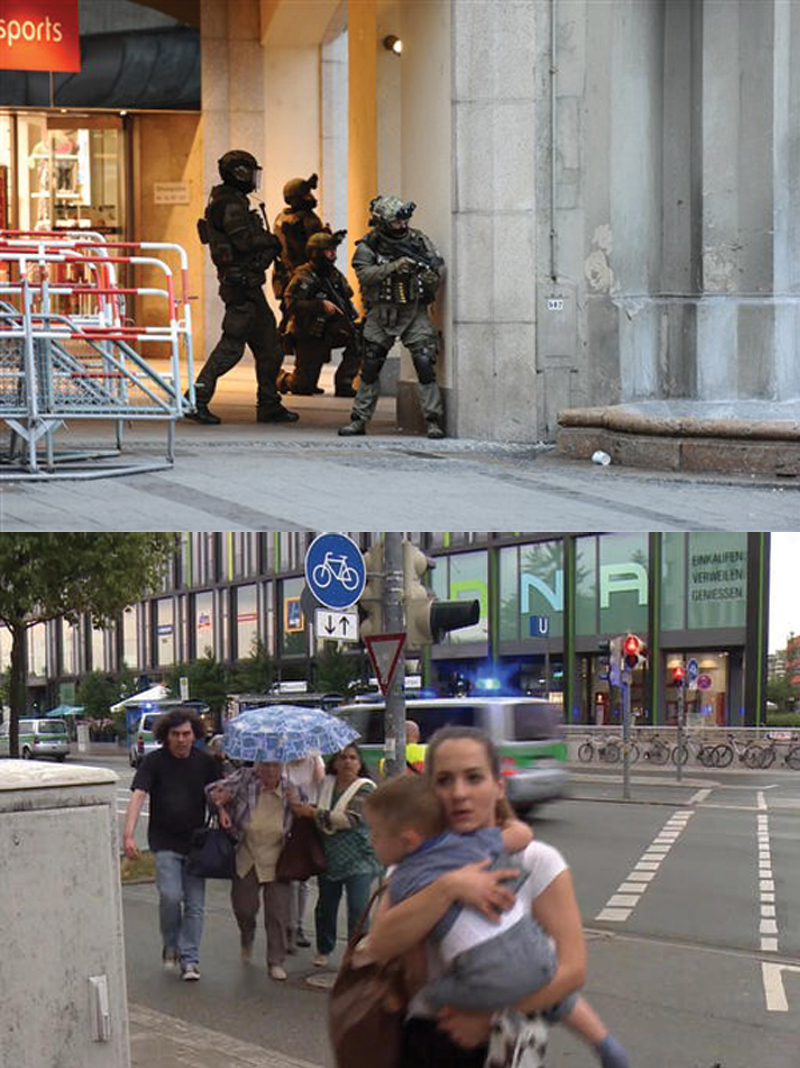 Heavily armed police forces operate at Karlsplatz (Stachus) square after a shooting in the Olympia shopping centre was reported in Munich, southern Germany.[above] & Members of the public run away from the mall, after the shootout.[below]

MUNICH, July 23: An 18-year-old German-Iranian man opened fire in a crowded Munich shopping mall and a nearby McDonald's Friday night, killing nine people and wounding 16 others before killing himself, the chief of police in the Bavarian capital said Saturday.

Police gave a "cautious all clear" early Saturday morning, more than seven hours after the attack began and brought much of the city to a standstill as all public transit systems were shut down amid a massive manhunt. They said a body found near the scene was that of the shooter and he appeared to have acted alone.

Munich police chief Hubertus Andraes told a news conference the suspect was a dual citizen fromMunich and his motive was still "fully unclear." Andraes said the suspect's body was found about 2 1/2 hours after the attack and was determined to be the shooter based on witness statements and closed circuit television footage of the attack. The shooter was not previously known to police and there was no evidence of any links to terrorist organizations, Andraes said.

Witnesses had reported seeing three men with firearms near the Olympia Einkaufszentrum mall, but Andraes said two other people who fled the area quickly were investigated but had "nothing to do with the incident."

The police chief said the nine fatalities included young people and children were among the 16 wounded, three of whom were in critical condition.

After gunfire broke out at the mall, one of Munich's largest, the city sent a smartphone alert declaring an "emergency situation" and telling people to stay indoors, while all rail, subway and trolley service was halted in the city.

It was the third major act of violence against civilians in Western Europe in eight days. The previous attacks, in the French resort city of Nice and on a train in Bavaria near the city of Wuerzburg, were claimed by the Islamic State group.

While police initially called the mall shooting an act of terrorism, they said they had "no indication" it involved Islamic extremism and at least one witness said he heard a shooter shout an anti-foreigner slur.

"The question of terrorism or a rampage is tied to motive, and we don't know the motive," Andraes said. "We can't question the suspect so this is all a little more difficult."

The attack started shortly before 6 p.m. at a McDonald's across the street from the mall, which was filled with people doing their weekend shopping. As dozens of shots rang out, terrified shoppers ran from the scene, some carrying babies and pushing strollers.

Video obtained by The Associated Press from German news agency NonstopNews showed two bodies with sheets draped over them not far from the fast food restaurant. Another video posted online showed a gunman emerging from the door of the McDonald's, raising what appeared to be a pistol with both hands and aiming at people on the sidewalk, firing as they fled in terror.

Witness Luan Zequiri said he was in the mall when the shooting began.

He told German broadcaster n-tv that the attacker yelled an anti-foreigner insult and "there was a really loud scream."

He said he saw only one attacker, who was wearing jack boots and a backpack.

"I looked in his direction and he shot two people on the stairs," Zequiri said. He said he hid in a shop, then ran outside when the coast was clear and saw bodies of the dead and wounded on the ground.

Germany's interior minister cut short his holiday in the United States to go back to Berlin late Friday to meet with security officials.

German Chancellor Angela Merkel was being regularly briefed on the attack, said her chief of staff, Peter Altmaier.

"All that we know and can say right now is that it was a cruel and inhumane attack," he said on German public channel ARD. "We can't rule out that there are terrorist links. We can't confirm them, but we are investigating along those lines too."

Altmaier noted that Friday was the fifth anniversary of the massacre in Oslo, Norway, by a far-right extremist who killed 77 people, 69 of them at a youth summer camp.

"You can only have absolute security in an absolute surveillance state, and nobody wants that, it would be the opposite of our free western European way of life," he said. "But, and this became clear again today, we can't talk down this danger. It's a danger that many countries are exposed, especially in the west, and that's why it's important to give our security agencies the instruments they need."

Police responded in large numbers to the mall in the northern part of Munich, near the city's Olympic Stadium in the Moosach district of the Bavarian capital. In all there were 2,300 officers involved, including the elite GSG9, SWAT teams from other German states and from neighboring Austria.

It was also not far from where Palestinian attackers opened fire in the Olympic Village in 1972, killing 11 Israeli athletes. Five guerrillas and a police officer were also killed. The GSG9 anti-terrorism unit was created after that attack, though the city saw a worse one in 1980, when 13 people were killed and more than 200 injured at the city's annual Oktoberfest in a bombing blamed on a student with ties to a neo-Nazi group.

It was the second attack in Germany in less than a week. On Monday, a 17-year-old Afghan wounded four people in an ax-and-knife attack on a regional train near the Bavarian city of Wuerzburg, and another woman outside as he fled. All survived, although one man from the train remains in life-threatening condition. The attacker was shot and killed by police.

The Islamic State group claimed responsibility for the train attack, but authorities have said the teen likely acted alone.

Gun attacks in Germany are uncommon. Firearm ownership is widespread but they are strictly regulated, with purchasers first having to take training courses in order to be granted a permit to own one. Many types of firearms are banned.

In the U.S., President Barack Obama pledged to provide Germany with whatever help it might need to investigate the mall shooting.

The man police say opened fire with a gun from his checked baggage at a Florida airport had a history... Read More...

Maha Astami, eighth day of Bada Dashain, being observed across the country today
16 hours ago

President Bhandari not to offer tika to general public this Dashain
19 hours ago
UN Day Special Feature: The proud story of Nepal Army in UN Peacekeeping Missions
12 hours ago