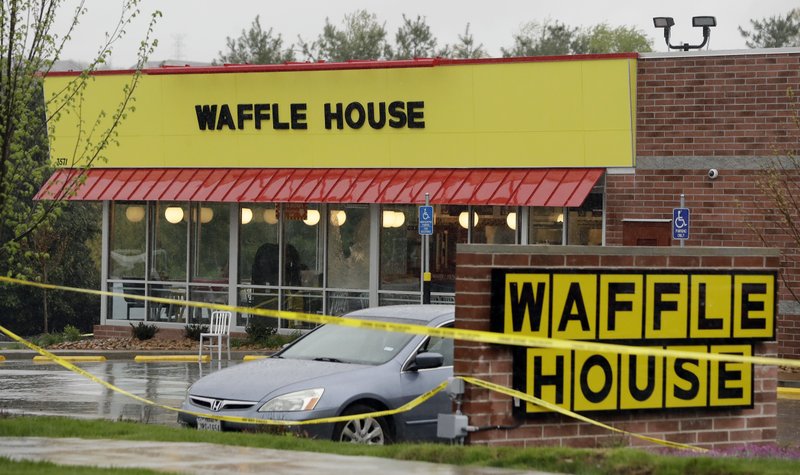 NASHVILLE, April 23: A nearly naked gunman wearing only a green jacket and brandishing an assault rifle stormed a Waffle House restaurant in Nashville early Sunday, shooting four people to death before a customer rushed him and wrestled the weapon away.

Authorities were searching for the 29-year-old suspect, Travis Reinking, who they said drove to the busy restaurant and killed two people in the parking lot before entering and continuing to fire. When his AR-15 rifle either jammed or the clip was empty, the customer disarmed him in a scuffle.

Four people were also wounded before the gunman fled, throwing off his jacket.

Nashville Police Chief Steve Anderson said there was no clear motive, though Reinking may have “mental issues.” He may still be armed, Anderson told a mid-afternoon news conference, because he was known to have owned a handgun that authorities have not recovered.

State police in Illinois, where Reinking lived until last fall, subsequently revoked his state firearms card at the request of the FBI and four guns were then taken from him, including the AR-15 used in Sunday’s shooting as well as a handgun, authorities said.

Sheriff Robert Huston in Tazewell County, Illinois, said deputies allowed Reinking’s father to take possession of the guns on the promise that he would “keep the weapons secure and out of the possession of Travis.” Huston added that, based on past deputies’ encounters with Reinking, “there’s certainly evidence that there’s some sort of mental health issues involved.”

While Huston said it was unclear how Reinking reclaimed the guns, Nashville Police spokesman Don Aaron said that his father “has now acknowledged giving them back to his son.”

Phone calls to a number listed for the father, Jeffrey Reinking, went unanswered.

Meanwhile, authorities hailed the customer who intervened to stop a further bloodbath, 29-year-old James Shaw, Jr., as a hero — though the father of a 4-year-old girl demurred and said he was just trying to survive.

One hand bandaged, Shaw told reporters he first thought the gunshots fired around 3:25 a.m. were plates falling from a dishwashing station.

When he realized what was happening, he took cover behind a door as shots shattered windows. The gun either jammed or needed a new clip, and that’s when Shaw said he pounced after making up his mind that “he was going to have to work to kill me.”

Shaw said he was not a religious man, but “for a tenth of a second, something was with me to run through that door and get the gun from him.”

They cursed at each other as they scuffled, Shaw said, and he was able to grab the gun and toss it over a counter. The gunman then ran away into the dark of the working- and middle-class Antioch neighborhood of southeast Nashville.

Authorities said he shed his jacket nearby and police found two AR-15 magazines loaded with bullets in the pockets. He was seen walking, naked, on a road, officials said, but later was spotted wearing pants but no shirt after apparently returning to his apartment.

Another witness, Chuck Cordero, told The Tennessean newspaper he had stopped to get a cup of coffee and was outside the Waffle House when the chaos unfolded.

“He did not say anything,” Cordero said of the gunman, who he described as “all business.”

Cordero said Shaw saved lives. “There was plenty more people in that restaurant,” he said.

The dead were identified as 29-year-old restaurant worker Taurean C. Sanderlin, and restaurant patrons Joe R. Perez, 20, Akilah Dasilva, 23, and Deebony Groves, 21. A police statement said Sanderlin and Perez were killed outside the restaurant, Groves was fatally shot inside, and Dasilva was critically wounded inside and later died at Vanderbilt University Medical Center.

Aaron, the police spokesman, said two of the wounded were being treated for gunshot wounds at the medical center, where spokeswoman Jennifer Wetzel said one was in critical condition and the other was in critical but stable condition.

Aaron said Reinking had been employed in construction and lived near the restaurant, and police used yellow crime scene tape to block public access to an apartment complex about a half-mile from the Waffle House. Reinking is originally from Morton, Illinois.

“This is a very sad day for the Waffle House family,” the company said in a statement on Twitter. “We ask for everyone to keep the victims and their families in their thoughts and prayers.”

Nashville Mayor David Briley described the shooting as “a tragic day” for the city.

“My heart goes out to the families & friends of every person who was killed or wounded,” Briley said in an emailed statement. “I know all of their lives will be forever changed by this devastating crime.”

U.S. Rep. Jim Cooper, whose district includes Nashville, said in an emailed statement that the shooting shows the need for tighter restrictions on “widespread civilian access to military-grade assault weapons.”

Nashville Chief Anderson said there was no Tennessee law that would have barred Reinking from having guns, though weapons could be taken away if the suspect had serious mental health issues. That would require taking him to court and having his rights taken away because of illness, a sometimes lengthy and difficult process, Anderson said.

Police reports filed in Illinois showed past run-ins with authorities there.

In May 2016, Tazewell County deputies were called to a CVS parking lot where Reinking told officers that Taylor Swift was stalking him and hacking his phone, and that his family was also involved, according to a report released Sunday. Reinking agreed to go to a local hospital for an evaluation after repeatedly resisting the request, the report said.

Another report from the sheriff’s office said Reinking barged into a community pool in Tremont, Illinois, last June and jumped into the water wearing a pink woman’s coat over his underwear. Investigators believed he had an AR-15 rifle in his car trunk, but it was never displayed. No charges were filed.

KATHMANDU, August 24: Although the government has already fixed November 26 as the date for parliamentary and provincial elections, the parliament’s... Read More...