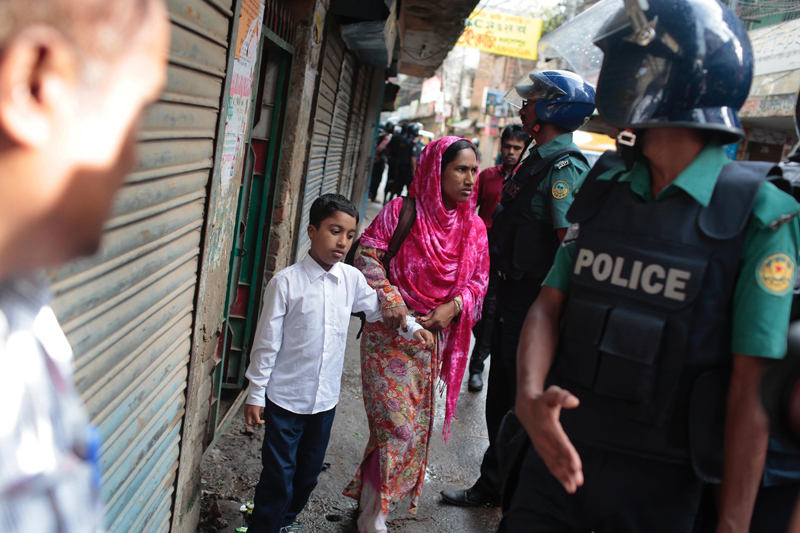 Inspector General of Police A.K.M. Shahidul Hoque said the raid took place in Dhaka's Kalyanpur area and one suspect was arrested and was being treated for injuries in a hospital.

Hoque said officials were investigating to see which group the men belonged to, but their clothing and other evidence showed it was likely that they belonged to local banned group Jumatul Mujahedeen Bangladesh, or JMB.

The group is blamed for a July 1 attack in Dhaka's Gulshan diplomatic area, where 20 people, including Italians and Japanese, were killed when armed gunmen attacked a restaurant.

He said the suspects attempted to flee the building by shooting their way out, but were stopped by police who cordoned off the area.

"It will take a few hours to have a clear idea. But we have found them clad in black dress ... suggesting they belong to the same group involved in the attack in Gulshan," he said.

"We have not found any evidence about any connection with the IS. They are members of a local group, JMB, I think," he said.

Local media reported that the arrested man was being treated for bullet wounds.

The Islamic State group claimed responsibility for the July 1 attack and for many other recent attacks on atheist bloggers, foreigners and minority groups, but authorities have rejected the claims, saying there are no signs of the group having any operations in the country.

Instead, the government says the local militant groups including the JMB are behind the attacks that have drawn global attention.