Pokhara airport to come into operation by December next year: Minister Bhattarai 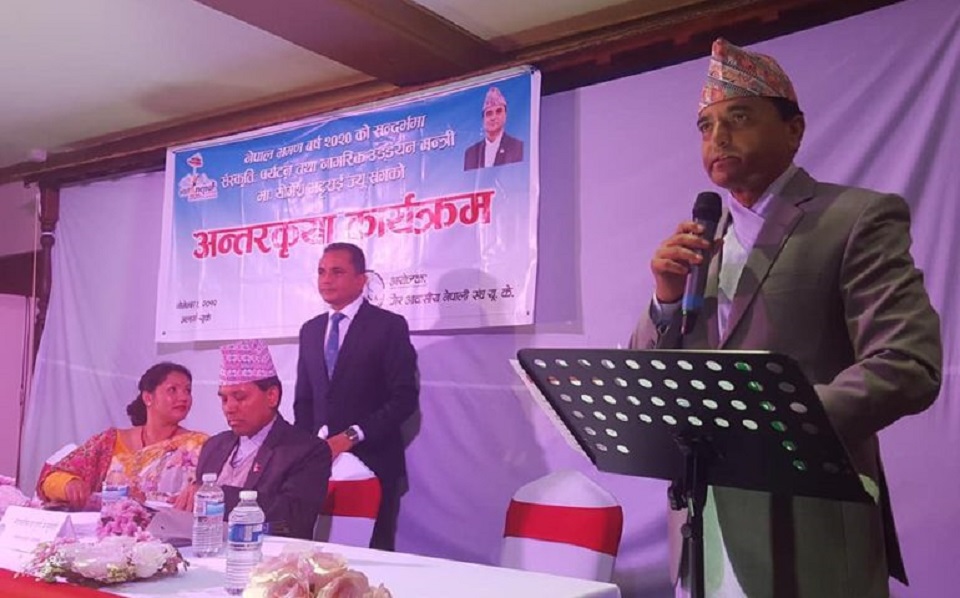 LONDON, Nov 4: Minister for Culture, Tourism and Civil Aviation Yogesh Bhattarai has said that the works of national pride projects have been executed faster than expected.

Speaking at an interaction program organized by Non-Resident Nepali Association, UK Chapter at Aldershot on Saturday evening, Minister Bhattarai claimed that the construction of much-awaited airports including Pokhara Regional Airport and Gautam Buddha International Airport has geared up in attacking pace. "Gautam Buddha International Airport would be completed by December this year and will be ready for regular flights by March next year, " said Bhattarai adding, "If current speed maintains, Pokhara Regional Airport will be ready for flights by December next year."

Speaking further, he hoped that restriction on Nepali air carriers in European airspace by the European Union (EU) and the International Civil Aviation Authority (ICAO) would be lifted within a few months. "European countries have now realized that the decision of ICAO to ban Nepali aircraft in the region was a mistake," insisted Bhattarai.

The EU banned Nepali planes in its skies six years ago citing lack of improvement in safety oversight by the Nepali aviation regulator. The restriction was put in place for the first time in 2013 shortly after the International Civil Aviation Organization (ICAO) raised significant safety concerns over Nepal's aviation sector. Although ICAO removed Nepal from its blacklist in July 2017, Nepali aircraft continue facing ban in European skies.

On a different note, Minister Bhattarai claimed that Nepal has been moving ahead toward development and prosperity after achieving political success. Speaking further, he said, "I'd like to urge you to invest in Nepal as it boasts a favorable atmosphere for economic prosperity," He also urged the non-resident Nepalis to utilize their knowledge and skills for the sake of the country's development as they have now proved to be successful entrepreneurs.

Speaking on the occasion, Dr Durga Bahadur Subedi, the ambassador of Nepal to Britain revealed an ambitious plan of welcoming 100 thousand tourists from Britain alone. Another speaker, the Chairperson of NRNA, UK Chapter Punam Gurung committed to implementing the agreement reached between the Government of Nepal and the NRNA to make Visit Nepal Year 2020 a grand success. "We will leave no stone unturned for the success of VNY2020. For that, we'll mobilize Nepali entrepreneurs in Britain and Mountaineering Association,"

Gurung also advised the government to launch effective programs to make the campaign of VNY2020 successful. According to her, direct flights to the UK from Nepal would help in attracting more British tourists. "Moreover, facilities such as transportation, accommodation, health and security to the tourists should be as affordable as possible," she suggested.

Mahashivaratri to be celebrated in special manner

KATHMANDU, Feb 14: Preparations are on to celebrate Mahashivaratri in a special manner on the occasion of Visit Nepal Year... Read More...