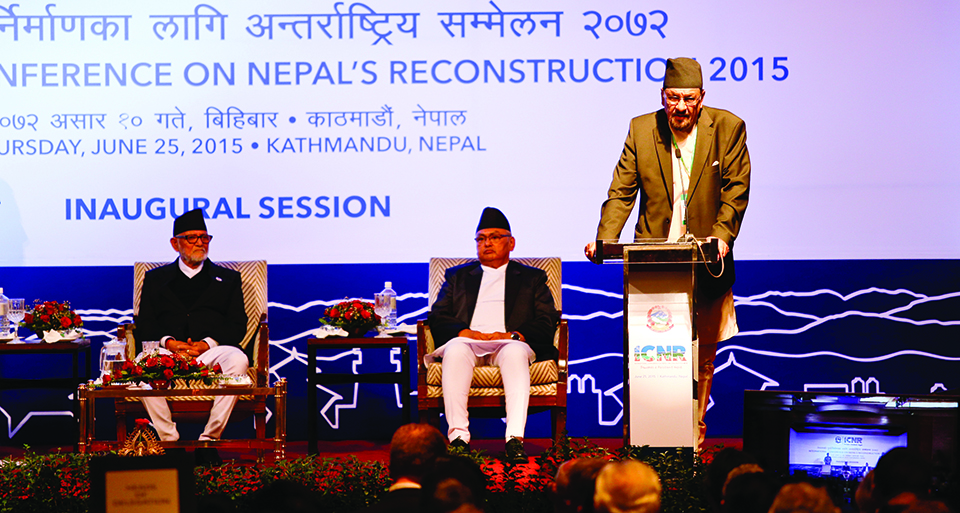 Although there is discrepancy between pledge and committed amount, World Bank has reassured NRA to meet the  pledge

On June 25, 2015, 24 donors pledged US$ 4.1 billion for post-earthquake recovery and reconstruction. The country received commitment of US$ 3.06 billion by February 20, 2017. The actual disbursement was only US$ 479.83 million by the end of 2017, which is nearly 12 percent of the pledged amount and 15.64 percent of commitment. We need to find why this happened to develop strategies for the future.

There are four distinct groups of pledging donors. The first category includes those who pledged but never turned up later. Austria, Bangladesh, Canada, International Monetary Fund (IMF), Netherlands, Pakistan, Saudi Fund, Sri Lanka, Sweden and Turkey belong to this category. The second category involves those who pledged and spent money without notice of National Reconstruction Authority (NRA). Australia, European Union, Finland, Norway, and Republic of Korea fall under this category. The third category, which committed and has been providing funds after a long time, involves China and India.

The World Bank, United Kingdom, United States Agency for International Development (USAid), Government of Japan and Asian Development Bank (ADB) fall under the fourth category. They have provided support even more than what they had initially pledged. So why did this happen?

The first category donors may have pledged money despite lacking capacity or resources or without securing proper approval from their respective authorities. It is also possible that we did not persuade them proactively. Whatsoever the reason, it has raised question about their reliability.

The second category of donors has their own channels of implementation. These donors allocate their resources according to their own priority or may have customized their existing programs as reconstruction initiatives. Such support may not be in line with Nepal’s priority. This may have happened as donors may have limited resources, but they wanted to orchestrate it as support for reconstruction.

China and India are strategically important donors for Nepal. India pledged US$1.4 billion and China pledged US$ 766.93 million. We received only US$ 1 billion commitment from India and China matched with its pledge.  The Government of India concluded grant agreement with UNDP and UNOPS in March 2018 for providing socio-technical facilitation for private housing. This facility was provided when a majority of houses was constructed already, but India has reimbursed housing grant.

With Indian support, we intend to construct 71 school buildings, 142 health buildings and 27 heritage monuments. China provided US$ 10 million as budget support for housing reconstruction and US$ five million as policy grant. There are additional 22 turnkey projects which are taken over by China.

The UKAid committed US$ 165.5 million, US$ 55 million more than the pledge. Similarly USAid provided US$ 159.82 million against their commitment of US$ 130 million. The Government of Japan almost matched its pledge with their commitment of US$ 247.07 million. The World Bank has been at the center in housing support. Although there is discrepancy between pledging and committed amount, the World Bank has been reassuring the National Reconstruction Authority to meet its pledge once the earmarked resources are exhausted.

There is shortfall in ADB’s commitment which is mainly in the infrastructure sector. However, we are hopeful that ADB will also meet its pledge. Except the World Bank and ADB, the interventions are not fully within the National Reconstruction Authority’s grip. The projects implemented under UKAid are largely identified by themselves. Beneficiaries in JICA and USAid project implementation area receive rather more intensive technical assistance in comparison to other areas which creates discrepancy in inputs.

We need to be cautious in the future. Raising funds through conference may not be highly effective. We need to initiate bilateral or multilateral dialogues with donors and secure commitment properly. Otherwise poor estimation of resources raises expectations which cannot be delivered later, raising question on government’s credibility. Nepal also needs to be selective in terms of receiving grants and loans. It has to develop terms and conditions and we need to accept foreign support only when it complies with our requirements.

The government must do an extensive homework. The Post Disaster Need Assessment was largely donor driven exercise where government had very little say. There has to be uniformity of inputs irrespective of the source of funding.

In the meantime, we must improve our governance and strengthen implementation mechanism. Justification of direct funding emanates from our own inefficiency. It is high time for Nepal to accept or reject the external funding based on Nepal’s interest. We need to accept only those resources which genuinely support Nepal’s requirements. We also need to assess donors’ credibility and gradually shortlist them based on their previous track record.

Planning based on fictitious funds is dangerous. We need to work with international community to develop aid architecture which can be made operational. Most of all, we must strengthen our own internal system and mobilize our internal resources as prudently as possible. For all this, however, high level of political commitment, something we have rarely displayed in the past, will be a prerequisite.

The author is Executive Member at National Reconstruction Authority (NRA).

What with all the Himalayan Roadies posters around town it’s hard to miss the rapper, Laure (Asis Rana), these days.... Read More...

84% youth suffering from anxiety due to COVID-19: Survey
23 hours ago

1st climber tests positive for virus on Everest
5 hours ago

Kathmandu’s sky is clear after months, air quality index docks at less than 35 μg/m³ (with photos)
6 hours ago

Kathmandu’s sky is clear after months, air quality index docks at less than 35 μg/m³ (with photos)
6 hours ago