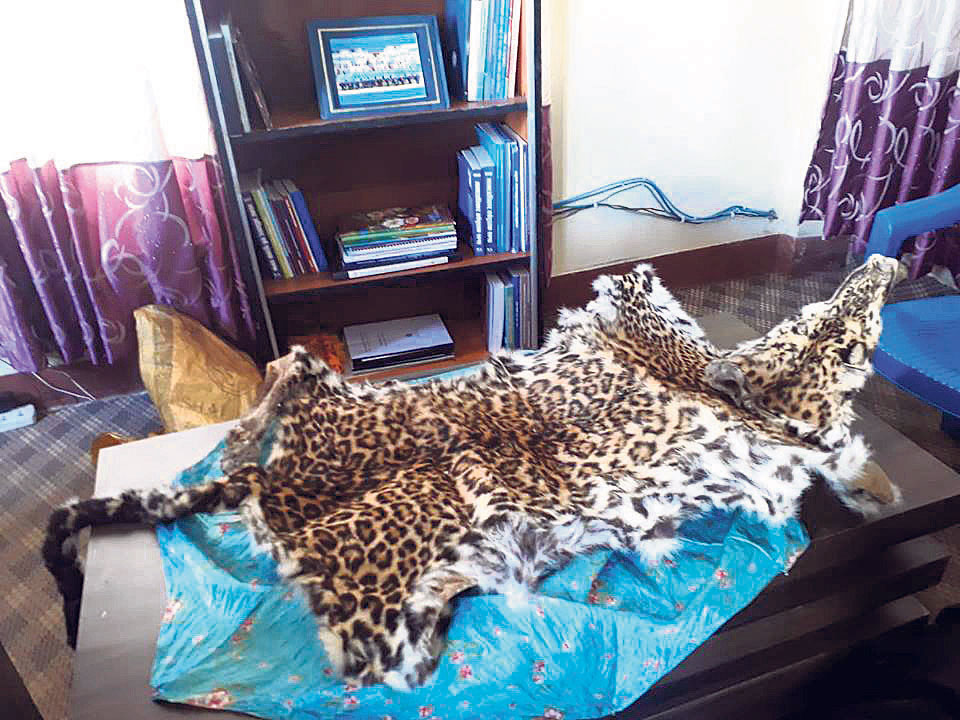 DOLAKHA, Aug 23: Dolakha police chief DSP Basudev Pathak received a tip off from an unidentified source regarding possible smuggling about a month ago.

‘A smuggler is trying to smuggle leopard skin from eastern Thulopaatal area to the capital,’ the notice read. Though he did not know the sender, he formed a team led by Inspector Madhav Prasad Kafle for investigation. After a month of probe on the matter, the team got some clue. Disguised as customers, the police team finally reached a rendezvous for the deal. Pradeep Gajmer of Baiteshwar-4 was caught red handed while trying to sell the leopard skin to the police team. Though Gajmer was held, police couldn’t find other members of his group involved in the crime. Reaching out to the main culprit was a huge challenge.

Police nabbed Gajmer on Tuesday and brought him to the police station. During interrogation, Gajmer confessed to his involvement in the crime. But he did not want to disclose the names of any other persons involved in the crime.

“We have caught those who carry the skin or animal parts, but reaching out to those who actually run this business is always a challenge,” DSP Pathak said. “But this time, it was a different case. We informed him of the new law which made our investigation easier,” he added. Police read out the lines from the newly introduced Criminal Act which states that ‘anyone who has confessed to a crime and helps police in the investigation, his or her punishment will be waived by up to 50 percent.’

Article 47 of the Act made Gajmer rethink about not disclosing the names. Police convinced him that he could get far less punishment if he helps them in investigation.

“After we told him that he would get less sentence, he thought for a while. He looked confused. We told him that he is going to go to jail anyway, and no one can save him. Better he play smart and reduce his punishment. Moreover, we requested him to speak for a good cause,” Pathak said. “After sometime, he got ready to give information about the dealers,” he added.

As per the information shared by Gajmer, police caught Bed Bahadur Sunuwar and Narad Sunuwar from Thulopaatal of Giri Municipality at midnight.

Interestingly, Narad is the chairperson of Sungure Community Forest. The man who killed the leopard and handed over the parts to Narad has also been caught by the police but his identity has not been revealed yet. According to the source, he is Narad’s relative. “We have learnt that he is Narad’s brother-in-law,” the source said.

Pathak stated that the new law was shown to each of those four and separate investigation was held. “The law worked,” he remarked.

“When told that their punishment would be lessened by half in case if they support in the investigation, they were all in dilemma at first. Then after a while, they acted smart and revealed a lot that really helped us,” he stated.

According to Pathak, who had handled several investigations before, the law earlier did not clearly mention waiver of punishment. When someone would support investigation, all that police officials could do was to be a little ‘kind’ to him/her.

“If they surrendered, there was certainly some relaxation. But now, it is written very clearly that they would be waived punishment by upto 50 percent if they contribute to the investigation,” he explained.  In legal terms, this kind of waiver in punishment to criminals is called ‘plea bargaining’. According to Pathak, plea bargaining could make investigation easier and reliable in many such police cases.

“Some of the new laws seemed to have made investigation little difficult for us, but some, like this one are going to help us in investigation,” he stated. Shedding light on the above case of smuggling, he added that the four were all into poaching and smuggling of animals since sometime. Despite being the chairperson of the community forest, Narad was still killing and selling animals.

“This is very dangerous. Responsible people who hold the position of chairperson of community forest are themselves destroying nature and wildlife,” Pathak noted.

BIRATNAGAR, May 3: The Office of District Attorney (ODA), Morang, has filed a case in the infamous 33 kg gold smuggling... Read More...

BIRGUNJ, Jan 30: The supply of white Indian eggs through the open border has raised the risk of the spread... Read More...