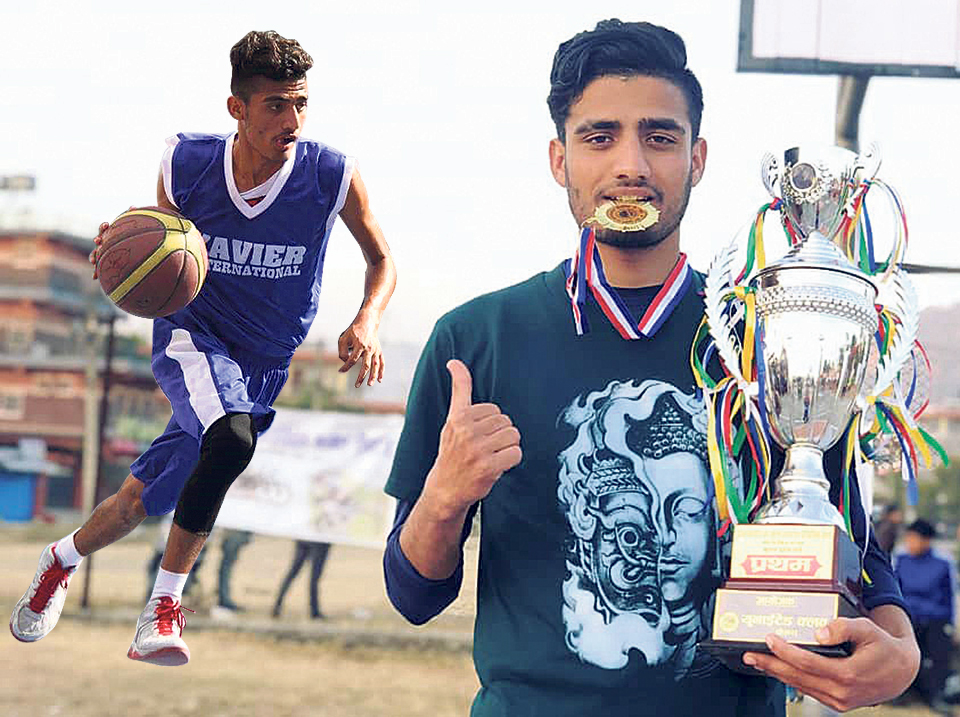 Rabin Gautam has been playing basketball for eight years. He started when he was 10 years old. When he was 16 years old, he was awarded the Best Junior Player and Most Valuable Player at the 3rd National U19 Championship. He was also the highest individual scorer at the Kwiks Basketball League in 2018, which was the first ever basketball league to be held in Nepal. Here, with The Week’s Situ Manandhar, Gautam talks about his career, how the game has shaped him, and what he feels is still lacking in Nepal to take the game to newer heights.

How did you get interested in playing basketball?
I was 10 years old when I first played basketball at my school. At that time, I played because I thought it was a fun game. My coach helped me better my game by guiding me, correcting my mistakes, and teaching me various techniques. As I kept playing and got better at it, my interest in the sport grew and I took it up seriously.

Has it been a difficult journey?
When I first started playing, I didn’t have basketball shoes or even a basketball for that matter. I used to borrow my father’s converse when I had to go play. I didn’t let anything stop me from playing though. Like with everything else, you need to work hard, and be disciplined and patient to be good at the game.

Where do you see yourself 10 years done the line?
In ten years’ time, I hope to be really good at my game and representing Nepal in international tournaments. My dream is to be known as a top basketball player from Nepal in the international arena. But I also have a family business to look after so I see myself as an established businessman besides a sportsperson. I think the two can go hand in hand.

If not basketball, what other sport would you play?
If not basketball, I would choose to play football as both of these games teach you the value of teamwork, discipline, and patience. But I really enjoy playing basketball so it would be blasphemous to think I would ever choose anything else over it. I have worked really hard to be in the position I am today and I have practiced for hours to master good shots. I have been injured and I have hustled. There’s nothing I haven’t done for basketball so, on hindsight, I wouldn’t want to choose any other sport instead of basketball.

What has playing basketball taught you?
Playing basketball has made me able to view the world in a positive light. It’s all about teamwork and discipline, and these two values have made me a better person. I find that being a sportsperson and playing basketball fill me with positive energy and I’m physically and mentally agile. I have also learnt the importance of perseverance. Nothing worth having comes easy. Success can’t be achieved overnight. You have to keep striving for progress.

What advice would give to youngsters who want to play basketball?
To be honest, Nepal is still a developing country where you can’t fully rely on sports as a primary career option. The pay scale for basketball players is still low. So, give first priority to academics. I don’t suggest anyone to give up on his/her studies to pursue basketball full time in Nepal. Find a balance between studying and pursuing your passion. If you want to play seriously, learn to think of it as more than just a game. Have respect for it, and be disciplined enough to practice regularly.

Do you think basketball is being given its due importance in Nepal?
I would have to say no because there are a lot of things that need to be fixed for it to flourish in Nepal. Firstly, the rules of basketball change with time but here in Nepal even in national level games really old rules are being followed. I think we must follow universally accepted and updated game rules instead of sticking to old ones in order to enjoy the game more, both as players and spectators. There is also a lack of financial assistance to basketball players who want to participate in international games. And not many national leagues and tournaments are organized in Nepal.

What do you think can be done to uplift the standard of basketball or other sports, for that matter, in Nepal?
It’s not that the government hasn’t realized the importance of sports in marking a country’s position in the world map. It has separated a huge budget for sports but the problem is it’s not being distributed properly. Apart from that, the stadiums in Nepal, where we usually practice and play, are not maintained properly. I also think our sportspeople deserve better coaches and more chances to participate in various leagues and tournaments to hone their skills. There is also a lot of skepticism regarding new players. Every ace player was once a beginner so I think we have to give more new people, who show potential and have the talent, a chance.