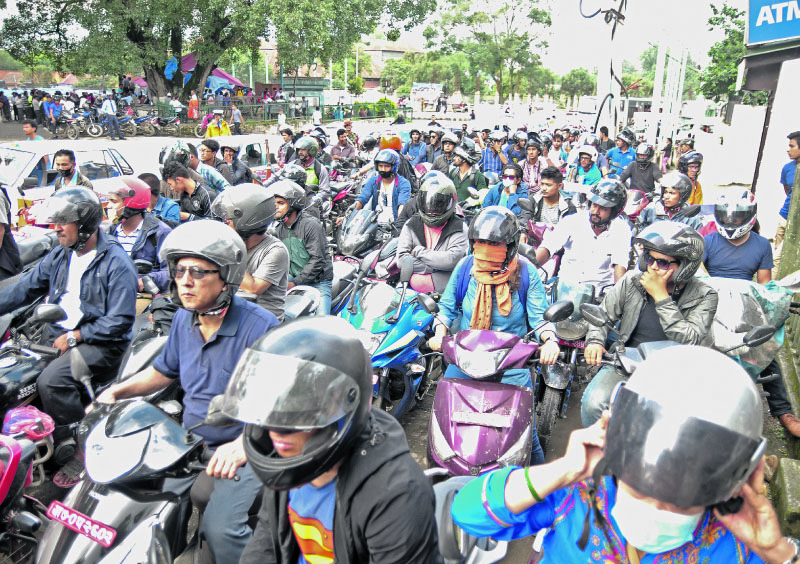 KATHMANDU, Aug 11: Nepal Petroleum Dealers’ Association has announced to withdraw its protest as the Nepal Oil Corporation (NOC) has addressed their demand.
With the decision of the association following a meeting with the NOC on Friday, the supply of petroleum products, which was disturbed for two days, is expected to get back to normal.

According to the officials of the association, the NOC has decided to increase the compensation of technical losses by 10 liters on petrol and three liters on diesel per 4000 liters.

Previously, the NOC used to provide technical loss compensation of 35 liters on petrol and 24 liters on diesel respectively per 4000 liters.

“After the agreement the compensation has gone up to 45 liters on petrol and 27 liters on diesel,” said Sitaram Pokharel, spokesperson for the NOC.

“As the dealers refused to receive petrol from the depots, there was shortage of petroleum products in the market,” Pokharel said: “Now petroleum supply in the market will be easy.”

Lilendra Pradhan, the president of the association, told Republica that they have agreed to withdraw their protest after the government decided to address their demand of compensation to the shrinkage loss. However, he said that their demands have not been fully addressed by the NOC.

“Our full demands have not been addressed by the NOC yet. So we have postponed our protest programs,” Pradhan said: “We have agreed to move ahead with detailed study regarding the loss.”

Earlier on Friday, a sub-committee of the parliament’s Consumer Welfare Relations Committee had directed the association to immediately resume fuel supply.
The association’s decision had already created supply crunch in the market, with queues forming up at refilling pumps.

“We found the report prepared by the study committee incomplete as the data of technical losses were not collected from all places. Also, a representative from Nepal Bureau of Standards and Metrology, Tilak KC, has not signed the report,” Subash Chandra Thakuri, chairperson of the sub-committee, told Republica.

Bhuwan Niraula, a consumer representative in the Baral-led committee, said that the study committee concluded that losses were marginal at some places.
“But it couldn’t be generalized. Technical losses might be negligible in tarai, while it could be higher in the hilly region,” he added.

The association had long been lobbying for an increased compensation against losses owing to temperature and stocking.

KATHMANDU, Sept 26: Thousands of patients across the country were deprived of medical treatment at hospitals where doctors  shut down the... Read More...