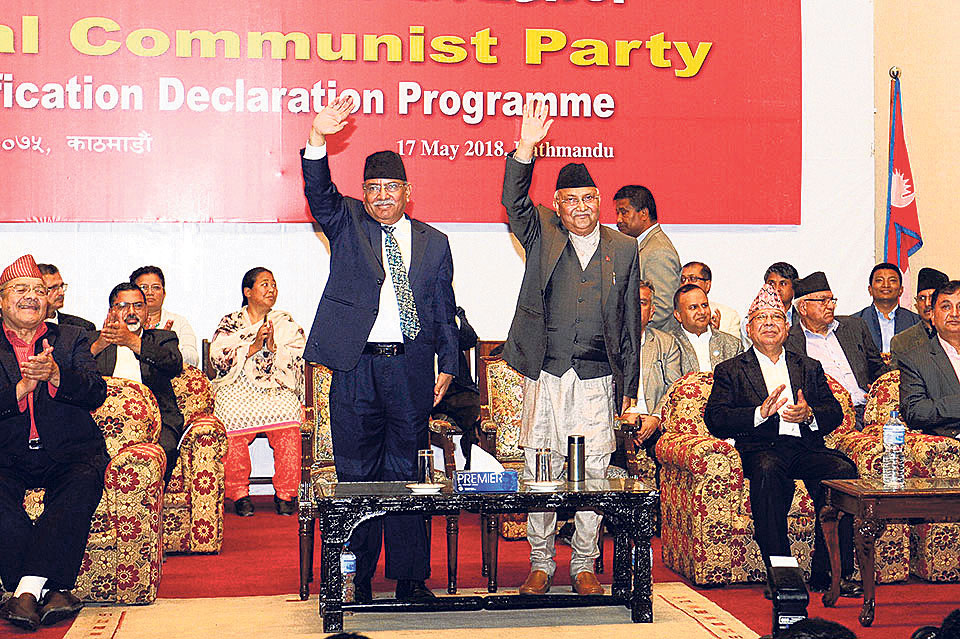 Almost seven decades after the red curtain had descended across the world, Nepal is still a communist haven. So is the communist prologue fading or has it just begun in Nepal?

Almost 70 years after the birth of communism in Nepal, the communist party holds nearly two-thirds representation in the parliament.  Throughout the communist world history there seem to be new brands of Marxian thought codified every few years where communists manipulate various contexts to their advantage.  Almost seven decades after the red curtain had descended across the world and millions died for the cause, there remain only a handful of communist states and governments today. In spite of this decline, Nepal is a communist haven.  We have constitutionalized our path to a socialist state and eventually to the communist ideal of people’s democracy.  Is the communist prologue fading or has it just begun in Nepal?  This article attempts to identify the different aspects that have served as preconditions for a communist state, as well as the unique hurdles posed by Nepal’s geopolitical status. The greatest hindrance to the communist agenda itself is our geographical predicament and the rising status of our neighbors which poses significant threat toward an ideologically divided nation which may even lead to a divided geographical identity.

Facts and figures
The history of political parties in Nepal has its foundation in underground movements.  A struggle against different regimes required an active and committed membership base.  Till date, Nepal still has active underground political parties.  This has in turn transformed Nepal into a country which is politically organized in virtually all spheres of life—from bee keepers’ association to vegetable cooperatives, trade unions, workers unions, lawyers’ association, journalists to business people, doctors to engineers, taxis to rickshaws, forest association to teachers’ associations etc. Around 110,000 bureaucrats are associated with Nepal Communist Party today and it has more than 9, 00,000 active members. There are nearly 4,30,000 active members in Nepali Congress, a unified RPP once reached up to 120,000 members, and a horde of new and old parties hold Nepali society politically charged at all echelons. In China, there are nearly 90 million party members. That means approximately one in seven people you meet in China is a member of the communist party.   Similarly, the communist party of Vietnam has nearly 45 million party members, in Cuba out of the 11 million population there are nearly 9,00,000 active members. This overarching organizational base is the very heart of a communist state. The active member organizational base has its roots in Marxian concept of organizing the proletariat, the working class, to eventually control political power. Furthermore, if one looks at the demographical categories, according to 2016 World Bank report 22 percent of Nepal’s population is middle class, two percent belong to the upper strata, 44 percent are in the vulnerable group and almost 28 percent are under the poverty line.  If you lump the vulnerable class and poverty cluster together then Nepali population still constitutes 70 percent that fit the communist rhetoric of the proletariat. Thus the idea of social inclusiveness, displacing the bourgeois, turning ownership of production and political power around has a mass appeal in Nepal.

Communist worldview
Another important aspect is the communist “worldview.” In other words, how communists view themselves, us, our society, and the polity. It matters fundamentally because it determines how we live and what kinds of communities and nations we will build. Some years ago in an interview with former Prime Minister Baburam Bhattarai he was asked: “What should Nepali citizens expect from a Prime Minister?”  He had replied that one should not expect anything different from what the society already is and that he is only a mirror of the society.  What he meant is that communism gives little priority to individualism and that for the communist social classes are more comprehensive than individuals.  Proliferation of this belief has taken place through indoctrination of over a million active members over the last 70 years and it has resulted in how we should view things in the government, in the society, and how the actions we perform should shape the way policies are formulated, how the government will be organized, and for whom it will be implemented. For example, property right, which is seen as an essential part of individual freedom, is seen as a source of alienation and major obstacle for attainment of individual freedom.  It is one of the reasons why land ownership, right to property, and restriction on property is at the heart of any political, social and economic discussion.

Entrepreneurs and the business classes are seen not as wealth or job creators, but profit mongers and class enemies who exploit the sweat and blood of the workers.  Consumer rights and benefits have to specifically go through partisan rights groups, otherwise individual attention and rights are rarely entertained in government offices.  Basic income is not a matter of demand and supply but rather an obligation.  Redistribution of wealth as we have through social security benefit is again an obligation and not a moral right to earn or create wealth.  The worth of individual lives is weighed against overall societal benefit and not the view that benefit of each individual will ultimately lead to cumulative benefit of the society. Hence 17,000 killed during the Maoist insurgency and hundreds killed in Tarai strikes are weighed ultimately toward that end.  Dr Govinda KC’s and Ganga Maya’s hunger strikes are condemned as anti-class struggles, and individual lives are chalked down as the mere means to an end.

In the past, power was maintained almost exclusively through direct control of colonization. In the present day, power is maintained mostly through indirect control of neo-colonial models of influence through trade, aid and debt. In the last 25 years, our neighbors have transformed into highly competitive nations militarily, economically and ideologically. Today there has been a significant redistribution of power among the world’s great powers. There is rising geopolitical competition between India and China and at the same time they are highly dependent on each other for economic growth. Conflict between the two countries is also very unlikely due to their engagement in trade. However, what is most alarming to a country like Nepal is the fact that rising geopolitical competition among powers usually happens through proxies rather than direct confrontation. For example, the Cold War saw over 100 proxy wars, some of which persist to date, the extent of which killed millions around the world and split up countries on ideological lines such as North-South Korea, East-West Germany etc.  Perhaps because of our geopolitical predicament, late King Birendra had put forward the concept of “zone of peace”.  Great powers create buffers. Unlike other regional neighbors, Nepal’s geographical location poses as a buffer for both our neighbors.  With the monarchy ousted, which posed as a neutral institution, we have ideologically antagonistic nations to our north—the largest communist country in the world—and to the south—the largest democratic country in the world.  History reminds us that when juxtaposed in ideological battles, countries have split, or been under the aegis of one or the other, have had prolonged wars, and even new countries have been born.  The rise of power among our immediate neighbors has put Nepal into a precarious position and raised a question of whether a communist ideological regime can sustain a single unified nation.

Deepening impacts
While communism is in decline all over the world, Nepal’s underground movements, demography, the worldview construction through an active organizational base has helped in the proliferation of communism in Nepal. The majority of the supposed proletariat group has invariably had a socialist inclination in major political parties’ manifesto and has been inscribed in Nepal’s constitution. The government’s position in policy structure gives a clear picture of the communist worldview in action. Individual goals or rights are negated and have often resulted in reprimanding the right to expression in media and social media. Popular singers such as VTEN, Durgesh Thapa, Pasupati Sharma etc have been silenced by the state for their supposed criticism of the regime in their songs. For the first time in Nepal, a near two-thirds communist parliament and the features outlined above have gradually added to a visible foundation toward a full communist state.  However, maintaining a delicate balancing act between our two neighbors will prove to be a difficult challenge not just because we are sandwiched between the two giants but also because these two countries are fundamentally hostile neighbors ideologically. World political history has demonstrated that contending great powers create proxies and antagonistic ideologies have created new countries.  This very position and pattern in world history is a looming threat for a country like Nepal, not only for communism itself but for the alarming possibility of an ideologically divided or a geographically divided nation.

The author, a former minister of government of Nepal, is a central member of Rastriya Shakti Nepal