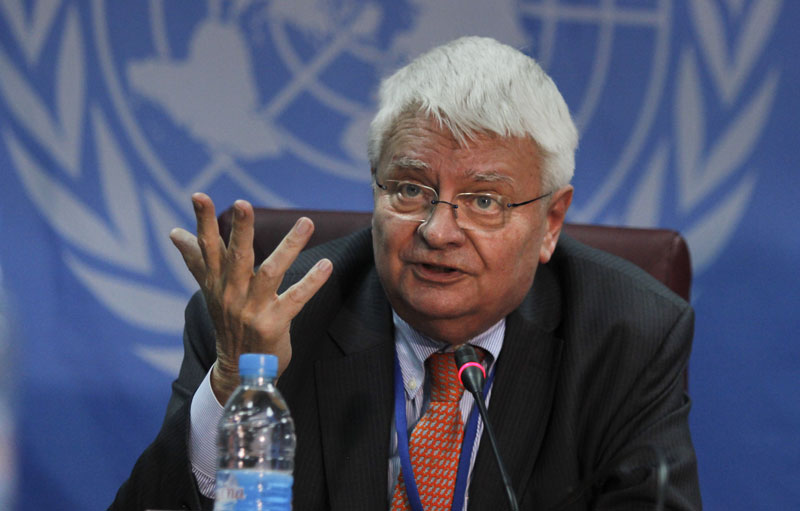 UNITED NATIONS, March 25:  The U.N. peacekeeping chief said Friday he expects operations in Haiti, Ivory Coast and Liberia to end by March 2018 which will save hundreds of millions of dollars.

Herve Ladsous told a farewell news conference Friday that a major U.N. review of the 16 peacekeeping missions — which cost nearly $8 billion a year — is currently under way, ordered by U.N. Secretary-General Antonio Guterres who took office on Jan. 1.

The Trump administration, which is seeking to cut payments to the United Nations including over 28 percent for peacekeeping, is conducting its own review. U.S. Ambassador Nikki Haley has said reform of the far-flung operations is a top priority.

Ladsous said the goal in Haiti is to have the more than 2,300 troops back home by October. The budget for the Haiti mission from July 2016 through June 2017 is about $346 million. Ladsous said the Security Council may decide to have a much smaller mission focusing on police.

The peacekeeping chief said all military members of the Ivory Coast mission have already left and the remaining civilians and police will be gone by June. That mission has a budget of $153 million for the same period.

Ladsous said he thinks the Liberia mission — whose latest annual budget was about $187 million — should be closed down by March 2018, following elections scheduled in October. A final decision is up to the Security Council.

The council is currently discussing whether to cut the Congo mission, which has about 22,400 people, including nearly 17,000 troops and over 1,350 police, and is the biggest and costliest with a budget of $1.2 billion.

Ladsous stressed that council members should take into account that this is a key year in Congo with "very important elections in a very delicate context" scheduled by December, and renewed security tensions not only in the volatile east "but also in new areas like the Kasais."

He said the U.N. and the African Union are conducting a review of their joint mission in Sudan's western Darfur region, one of the costliest for the United Nations with an annual budget of over $1 billion and more than 13,600 troops.

Ladsous said the current mission, known as UNAMID, "has nothing to do" with the situation 10 years ago when the mission was established and government-allied janjaweed militias were carrying out "mass extermination of civilians."

"Overall the situation in Darfur, while not perfect, is certainly nothing compared to what it used to be," he said. "So we have to see whether we need to retain all these people, whether we adjust." He noted the Sudanese government's longstanding request for an exit for UNAMID.

Ladsous, who is stepping down on March 31 after six years as undersecretary-general for peacekeeping, just returned from South Sudan where the U.N. has an almost 12,000-strong peacekeeping mission, which costs nearly $1.1 billion annually. He said the U.N. "has been moving heaven and earth" to deploy an additional 4,000 peacekeepers from the region to help protect civilians caught in fighting.

Ladsous said "the vanguard elements" of the regional force will likely be deploying between the end of April and the first week in May including a company of Rwandan troops and helicopters and units from Bangladesh and Nepal.

Looking back at how peacekeeping has changed, Ladsous said 25 years ago peacekeepers were respected but nowadays "we are kidnapped, we are shot at, we are bombed" and targeted by explosive devices.

In part, he said, this is a result of rebel groups and fighters who don't feel bound by international law and the laws of war and "just pursue their agenda regardless." But Ladsous said it's also true that some governments don't abide by their commitments and that's why "I keep saying the Security Council should take a serious view of this and act accordingly."