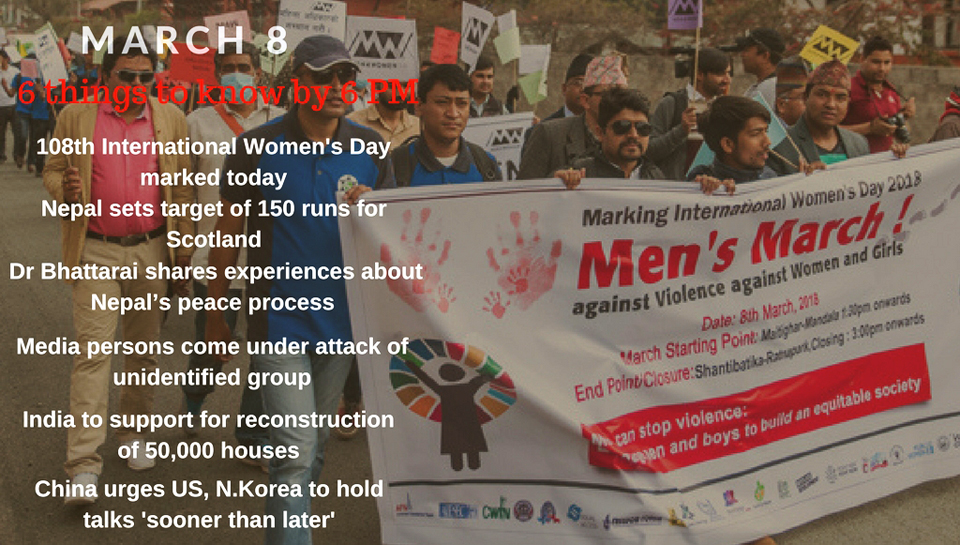 On the occasion of 108th International Women's Day, a parade was held here in the capital on Thursday. The parade organized by the Ministry of Women, Children and Social Welfare began from Bhrikutimandap and passed through Bhadrakali temple, Sahid gate, New Road and converged into a corner meeting at the Shanti Batika in Ratnapark.

Nepal has set a target of 150 runs against Scotland in the ICC Cricket World Cup Qualifier held at Bulawayo, Zimbabwe on Thursday. Nepal won the toss and elected to bat first. Skipper Paras Khadka made 63 runs in 75 balls for Nepal. Khadka became first Nepali player to complete one thousand runs in List-A cricket.

Former Prime Minister and Naya Shakti Party Nepal Coordinator Dr Baburam Bhattarai has said that the Nepali peace process had been led by the Nepali people themselves. Addressing the Regional Conference on Humanitarian Access and Negotiation in Asia on Thursday, Bhattarai said that the international community did not mediate the peace process of Nepal. “Though the role of international community was important, it was not decisive.

An unidentified group has assaulted two employees of the Chiyabari FM in Ilam Wednesday night. Some unidentified people attacked radio technician Prakash Neupane and marketing manager Krishna Pathak at around 10 pm on Wednesday when they were going back to their room after closing the FM radio office.

India to support for reconstruction of 50,000 houses

The Government of India is supporting the reconstruction of 50,000 houses in earthquake-affected districts of Gorkha and Nuwakot. An agreement to this end was signed today between the Indian government, United Nations Development Programme (UNDP) and United Nations Office for Project Services (UNOPS) in order to expedite the post-earthquake reconstruction process of Nepal.

China urges US, N.Korea to hold talks 'sooner than later'

China's foreign minister urged the United States and North Korea Thursday to start talks as soon as possible, stressing that "the sincerity" of all parties to solve the nuclear crisis would be tested. Foreign Minister Wang Yi cautiously welcomed Seoul's announcement that Pyongyang had offered to hold denuclearisation talks with the United States in return for security guarantees.