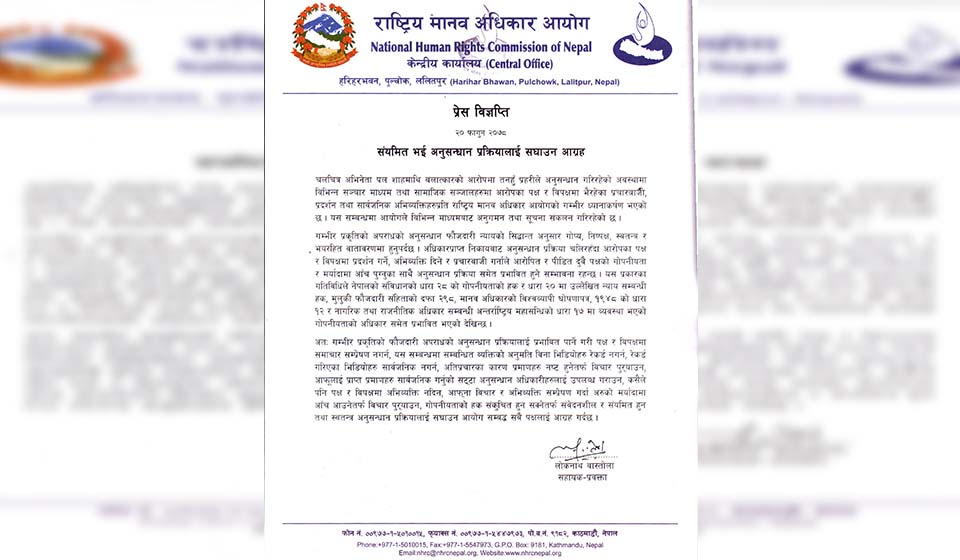 KATHMANDU, March 4: The National Human Rights Commission (NHRC) has urged the people not to make statements taking sides in the Paul Shah case.

Issuing a statement on Friday, the commission asked all to not take sides, capture photos and record videos of the parties concerned without their permission, and make the photos and videos public. It has also asked the people to provide evidence, if any, to the investigating officers and consider the sensitivity of the issue.

The commission has stated that such activities may violate the privacy and dignity of both the accused and the victim while an investigation is underway.

According to the statement, investigations into serious crimes should be conducted in a confidential, impartial, independent and fearless environment.

The NHRC discouraged excessive propaganda which can affect the investigation process of serious criminal offenses and eventually destroy the evidence.

The 17-year old singer filed the rape case accusing Shah of raping her under the pretext of love.

Adequate research has already been conducted on dengue, says NHRC

KATHMANDU, Sept 16: Nepal Health Research Council (NHRC) under the Ministry of Health has clarified that it has already carried... Read More...

NHRC urges govt to crack down on medicine cartel in Janakpur

KATHMANDU, Feb 19: The National Human Rights Commission (NHRC) has instructed the government to intervene in the drugs market to... Read More...