Patients made to pay illegally for vital self-dialysis fluid 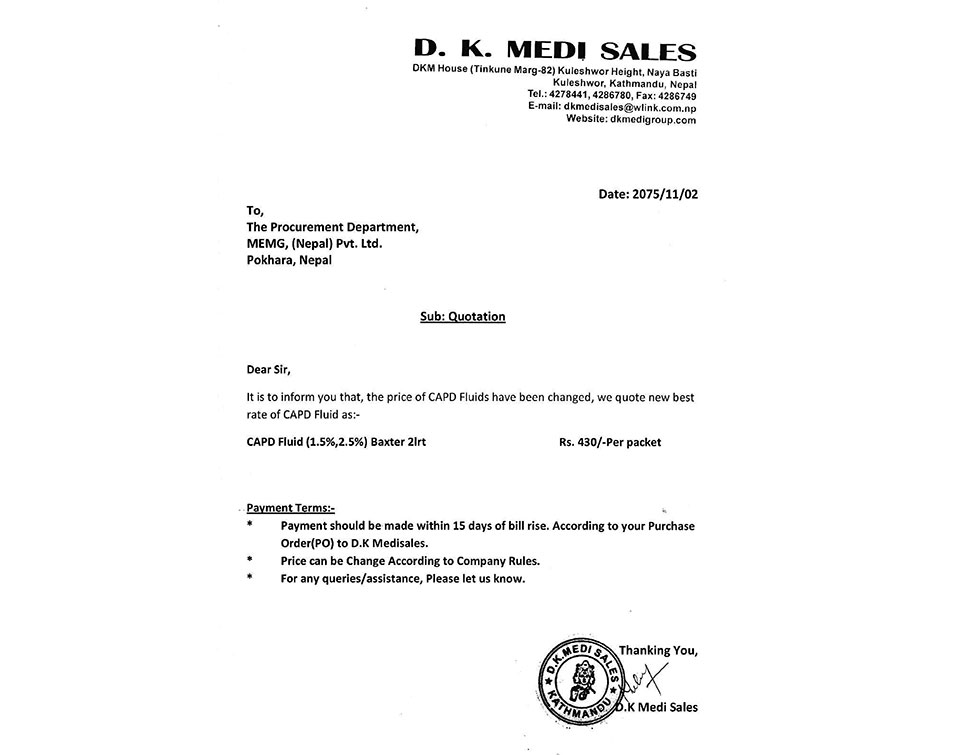 KATHMANDU, Oct 31: Despite a government decision of 2016 to provide free dialysis for those with chronic kidney disease, it has been found that patients are forced to pay a certain amount themselves to meet the cost of peritoneal dialysis.

Since May 2016, the government has been providing free Hemodialysis and Continuous Ambulatory Peritoneal Dialysis (CAPD) services to kidney patients.

A portable type of dialysis, CAPD uses manual packets of peritoneal dialysis fluid that goes into the belly and collects excess water and waste, which is drained into another bag. Patients can undergo this dialysis by themselves at home.

For those needing peritoneal dialysis, the government provides for free 90 packets of dialysate [the part of a mixture which passes through membrane during dialysis] for one month. The cost per packet is Rs 408 and dialysis is required three times a day. So the government subsidy per patient comes to Rs 36,720 a month. A total of 221 patients underwent peritoneal dialysis last year.

The dialysate supplier, DK Medi Sales, has refused to provide it at the government-fixed rate of Rs 408 per packet since Baishakh 2076 [mid-May 2019]. In a letter issued on Falgun 2, 2075 [Feb 14, 2019], the firm informed all hospitals concerned that the price of the CAPD fluid had been increased. It has been charging Rs 430 per packet since then.

Sanjaya Adhikari, a peritoneal dialysis clinical expert who is also affiliated with DK Medi Sales, argued that the price increase was a compulsion. He cites delays in reimbursements by the government, the increase in customs duty and storage-related expenses as the major reasons for the increment.

“The government is levying 5 percent customs duty on imports of the fluid. This has to be either revoked or reduced for us to be able to provide the fluid at the price set by the government,” says Adhikari. He added that it takes months to be reimbursed by the government but they have to make payments immediately to the producer -- Baxter, which is based in the Philippines.

With the supplier firm adamant, dialysis patients are having to pay the shortfall of Rs 22 per packet, or around Rs 2,000 every month, out of their own pockets. Patients have to undergo the treatment for life unless they go for kidney transplants. The government provides a one-time support of Rs 550,000 for kidney transplants to meet the cost of surgery, cross-matching and medications.

“It’s illegal to charge the patients any money,” says Som Nath Kafle, a 59-year-old patient. A resident of Pyang Village in Ilam, he has been undergoing peritoneal dialysis for the last two years.

The umbrella organizations of hospitals and of kidney patients have knocked on the doors of the authorities concerned about the cost shortfall. However, the government has been insisting that the supplier must provide the dialysate for Rs 408 per packet. Regulations relating to the Deprived Citizens Medical Treatment Fund, which were revised in August, clearly puts the cost at Rs 408.

“We are caught in the middle,” added Kafle. “ Neither side is budging and we are the ones hurting bad. “

Balaram Subedi, coordinator of the Shree Kidney Victims Concerned Society Nepal, says they are planning to organize a protest.

“We will protest in front of the prime minister’s residence at Baluwatar next week,” says Subedi.

Menuka Moktan, a nursing officer at the Nursing and Social Security Division, argues that the monopoly enjoyed by the lone supplier is one reason there is a problem. She informs that the division has already asked the Department of Drug Administration (DDA) to provide a list of companies that import medicines.

“We are also discussing other options to maintain the fair price for peritoneal dialysis,” she said.

Dr Bikas Devkota, chief of planning and monitoring at the Ministry of Health, says there can be a revision if the ministry is convinced about the justification.

“We are open to reviewing the per-unit cost through discussions with hospitals and stakeholders,” he said, adding that patients should receive their treatment without any interruption.

Meanwhile, experts are alarmed at the increase in the number of kidney patients, which they attribute mainly to hypertension and diabetes. According to officials concerned, the prevalence of renal failure is high among foreign employment returnees and those who take painkillers haphazardly.

KATHMANDU, April 1: COVID-19 cases climbed to five on March 29 after a 19-year-old female student who returned to the... Read More...

SURKHET, Feb 29: After the establishment of the Labour and Employment Office in Karnali Province, as many as 2,615 people... Read More...

KATHMANDU, Nov 6: When Nepal introduced the free-visa-free-ticket policy in July 2015, workers and rights groups hailed it and hoped... Read More...

Seven arrested for trying to rob tourist
17 minutes ago