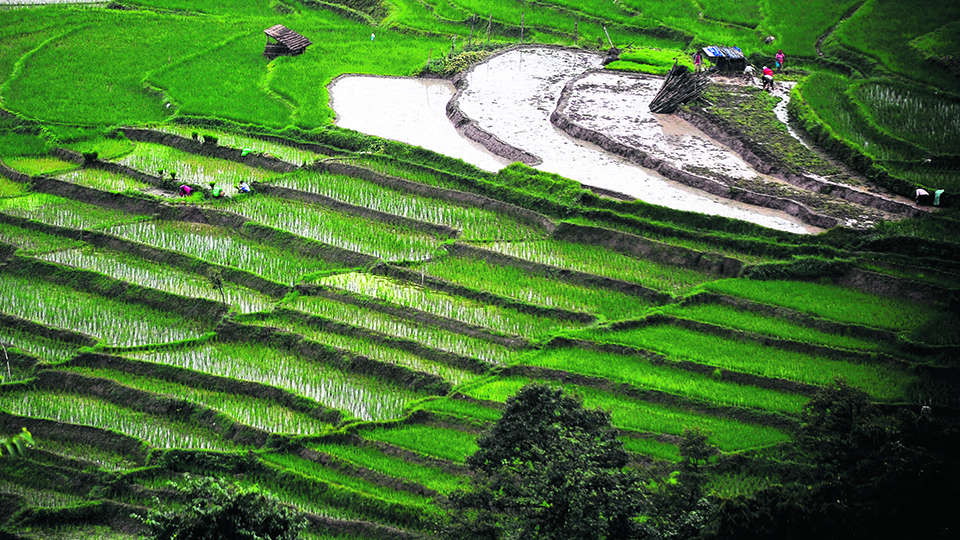 KATHMANDU, August 1:  Paddy transplantation has been completed on 80.18% of the rice field across the country as of Sunday.

Sudurpashchim province has the highest transplantation rate with paddy transplanted on 94.17% of cultivable land, or 155,033 hectares. Two districts in the province – Kailali and Kanchanpur – have reported 100% transplantation.

Jumla is the only other district that has achieved 100% paddy transplantation.

According to the department, paddy transplantation rate this year is 1.12 percentage points down compared to date till July 28 of the last fiscal year.

“Though monsoon was delayed by 10 days this year, transplantation took momentum right after the monsoon,” Mahadev Prasad Poudel, a senior agriculture economist at the department, told Republica.

Nepal’s annual paddy production capacity is around 5.61 million tons. Officials say that the delayed monsoon has affected transplantation this season. However, paddy transplantation had begun in paddy fields having irrigation facilities before the monsoon rains came.

“Because of delayed monsoon, many farmers have been forced to transplant mature seedlings which do not grow as expected,” Poudel, said, adding: “Farmers in tarai districts transplant seedlings a bit late compared to other parts of the country. So transplantation region continue till third week of August.”

He also said there was little chance of yields being affected this year.
Farmers, who do not have irrigation facilities, started paddy transplantation only after the monsoon rains season began in the second week of July. Generally, paddy transplantation across the country is completed by mid-August.

Agriculture accounts for about 27% of the country’s total Gross Domestic Product (GDP). Paddy alone contributes around 7% of the GDP, while the crop’s contribution to agriculture GDP is 21%.

KATHMANDU, July 12: Paddy transplantation in eastern tarai districts is lower this season compared to other parts of the country. According... Read More...