PAC for action against current and ex-ministers, clean chit for Rai 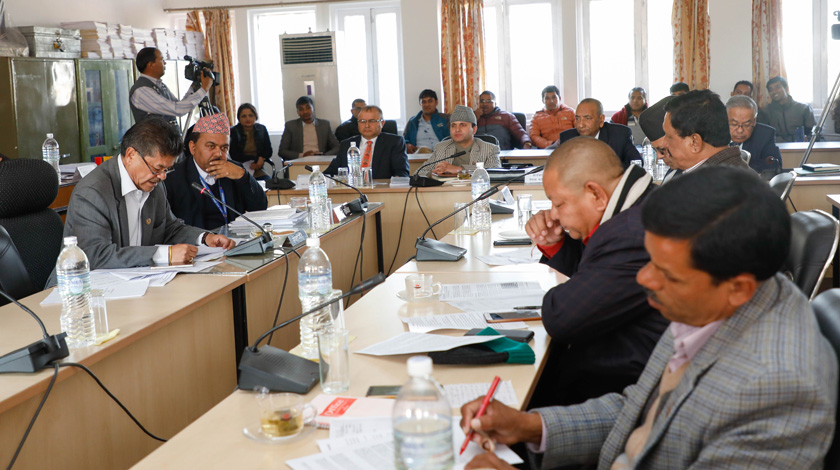 KATHMANDU, Jan 8: Parliament's Public Accounts Committee (PAC) on Monday endorsed with some corrections the report of the subcommittee is formed to probe irregularities in the procurement of two wide-body jet aircraft for the national airline.

The sub-panel in its report submitted last week had suggested action against the tourism minister and two past holders of the post as well as other top officials after reaching the conclusion that Rs 4.35 billion was embezzled in the aircraft procurement.

The full committee meeting held on Monday softened the 'punishment' it recommended for Minister for Culture, Tourism and Civil Aviation Rabindra Adhikari, suggesting action against him 'as per the legal provisions'. The sub-committee had recommended 'maximum punishment' for him.

The subcommittee in its report submitted to the PAC on Friday had recommended 'maximum punishment' for Minister Adhikari, allegedly for releasing the final installment of payment for the aircraft purchase in disregard of the 55th annual report of the Office of the Attorney General on financial embezzlement and for forming a perfunctory probe committee . Adhikari was also accused of lying to the sub-panel about having had an informal conversation with the Office of the Auditor General (OAG) before releasing the final tranche of the purchase price.

PAC has now recommended the government and the Commission for Investigation of Abuse of Authority (CIAA) to hold Adhikari, Shahi and Dev morally accountable and take action against them as per the legal provisions.

After the government announced in its annual budget for Fiscal Year 2014/15 that it was to add more aircraft to the NAC fleet , the Ministry of Culture, Tourism and Civil Aviation was directed the following year to begin the aircraft procurement process. The budget for FY 2016/17 directed the ministry to improve NAC's management, find a strategic partner, and buy two wide-body aircraft.

At the time, then Tourism Secretary Rai chaired the NAC Board. To proceed with the procurement process, Rai on April 14, 2016 gave the okay for the formation of a four-member procurement sub-committee coordinated by Surya Prasad Acharya . However, by the time the sub-committee submitted its report to the ministry on September 22, 2016, Rai had been transferred to the Ministry of Industry, Commerce and Supplies. “Based on these facts, no involvement has found in financial embezzlement by Secretary Rai in the aircraft procurement,” the amended report reads.

Likewise, the report has suggested strict action under the law against retired secretary Shankar Adhikari for proceeding ahead with the procurement process and approving the procurement tender. PAC has suggested the government take action against Adhikari and other officials for abuse of authority and corruption .

The PAC meeting also concluded that NAC Managing Director Sugat Ratna Kansakar is the main culprit in the irregularities in the procurement process and has directed the government to immediately suspend him. The committee has asked the government to take necessary action against incumbent Tourism Secretary Krishna Prashad Devkota and NAC board members who were involved in the wide-body procurement .

Endorsing the report submitted by the sub-panel on Monday, the PAC has concluded that the incumbent civil aviation minister, the two former ministers, high-ranking officials and NAC officials were all involved in irregularities in the mega procurement deal .

Election of 110 PR candidates: Who are on the list of seven nationally recognized parties?
27 minutes ago