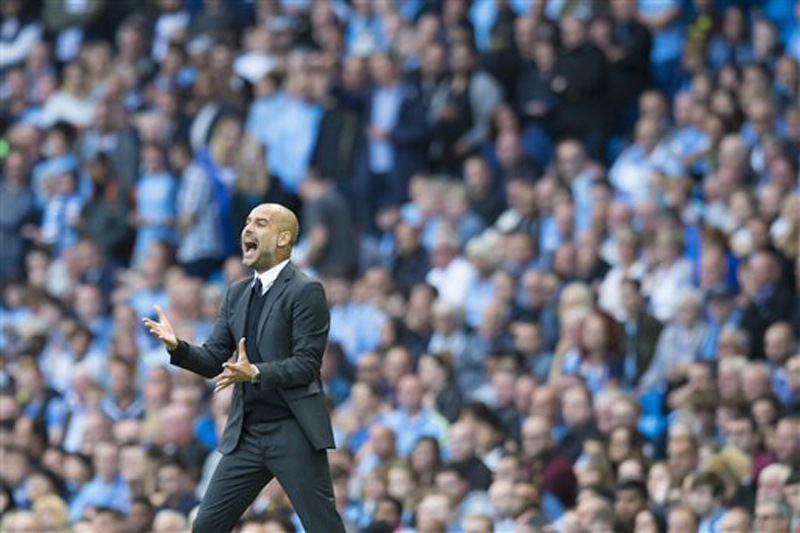 MANCHESTER, Aug 13:  Manchester City needed a late own-goal to beat Sunderland 2-1 Saturday as Pep Guardiola's management career in the Premier League got off to a labored start.

The bookmakers' favorite for the title, City dominated possession and was leading after just four minutes when Sergio Aguero scored from the penalty spot.

But there was no goal rush in its wake as a Sunderland side under new manager David Moyes defended with determination and discipline at Etihad Stadium.

Sunderland's reward came in the 71st when Jermain Defoe latched on to a through-ball to score the equalizer.

But there was a sting in the tail for the visitors in the 87th, when a deflected cross by Jesus Navas struck Sunderland's Paddy McNair on the head and the ball flew into his own net.

Guardiola punched the air with satisfaction at the final whistle.

The former Bayern Munich and Barcelona coach could hardly have created bigger shockwaves by leaving out Joe Hart in a move certain to increase speculation over the England goalkeeper's future, while one-time team lynchpin Yaya Toure did not even make the squad.

John Stones was handed an immediate debut along with fellow new signing Nolito, while Aleksandar Kolarov played in an unfamiliar central defensive role.

It may take time for Guardiola's blueprint for success to become evident but it was clear the team now has a different, non-stop approach.

Van Aanholt then allowed City to gain the advantage a minute later when he slid in late to foul Raheem Sterling in the area.

Aguero calmly struck home from the spot to get the Guardiola era up and running.

City continued to dominate possession throughout the first half but chances were few and far between as Sunderland settled and refused to let the hosts have things their way.

It was some time before Nolito went close by curling across goal and Kevin De Bruyne fired wide with a long-range effort.

Sunderland also had some occasional moments with Defoe, still a sharp operator at 33, prompting Caballero to rush out of his area to clear and then extending the keeper with an instinctive volley.

Sterling remained full of running into the second half and troubled the Sunderland defense as he reached the byline and crossed — but Aguero shot wide in the ensuing goalmouth scramble.

City was made to rue that miss as Sunderland hit back through Defoe. Fabio Borini's pass to Jack Rodwell drew out Stones and the former City midfielder quickly played in Defoe, who found himself with time to stroke the ball past Caballero.

That was not in the Guardiola script, but his team produced the required response.

Substitute Navas broke down the right and his cross took a fortunate ricochet off goalkeeper Vito Mannone to hit McNair on the head and go in.

City almost claimed another in injury time when Kelechi Iheanacho broke clear but his shot was deflected over.

Barcelona knows what to expect against Guardiola's City