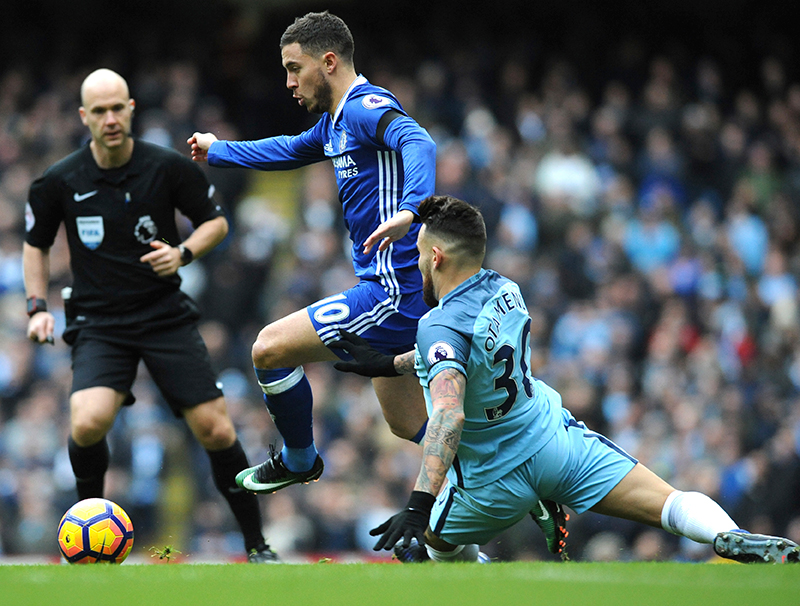 MANCHESTER, England, Dec 3:  Manchester City lost the game and its players lost their cool as Chelsea rallied for a 3-1 win in a fiery match to stretch its lead in the English Premier League on Saturday.

After conceding three goals in the final half-hour, City's frustrations boiled over in injury time. Sergio Aguero was red-carded for a knee-high lunge on David Luiz, and Fernandinho was sent off for grabbing Cesc Fabregas by the neck and pushing him over an advertising hoarding in the ensuing melee.

In all the chaos, Chelsea emerged with an eighth straight win and strengthened its claims to be the title favorite.

Diego Costa was the architect of the turnaround at Etihad Stadium, equalizing in the 60th minute with a league-high 11th goal of the season before setting free substitute Willian for the second goal in the 70th. Eden Hazard clinched victory in the 90th on another counterattack behind City's stretched defense.

"We showed our power," Luiz said. "It also shows our character that we didn't lose our heads."

Chelsea opened up a four-point cushion over City after 14 games and has picked up maximum points since losing 3-0 to Arsenal on Sept. 24.

City took the lead through Gary Cahill's own goal on the stroke of halftime and will bemoan not only missing a number of great chances — Kevin De Bruyne contrived to hit the crossbar from close range three minutes before Costa's goal — but the failure of the referee to miss Luiz's apparent shove on Aguero in the 30th when the Chelsea defender was last man.

That perhaps explained the late challenge on Luiz by a frustrated Aguero, who has now been dismissed twice this season and therefore faces a four-match ban. The Argentina striker won't be seen again in the Premier League until Dec. 31.

"It is a pity it finished like this ... I apologize," said Guardiola, who said Aguero's challenge on Luiz "wasn't intentional."

"We didn't win because we missed a lot of chances," he added, "not because of the referee."

It was pure opportunism from Chelsea, which was under pressure for much of the game but always looked dangerous on the break with the pace of Hazard and the ruggedness of Costa. The visitors scored from all three of their shots on target.

There's no doubt that City's opening goal was a lucky break, but it was fully deserved after waves of attacks at the end of the first half.

Cahill lunged at Jesus Navas' right-wing cross with his wrong leg and the ball reared up and flew into the top corner. The England defender lay with his face in the turf in despair.

Cahill rectified his mistake early in the second half when he cleared off the line a shot from Aguero. And with City pushing forward, De Bruyne crashed a shot off the top of the crossbar from inside the six-yard box after meeting Navas' cross.

Fabregas picked out Costa with a superb diagonal pass, and the Spain striker chested the ball inside Nicolas Otamendi and finished low past Claudio Bravo. Costa played an integral role in Willian's goal, beating Otamendi — who dived into the tackle rashly — in the center of the field and setting free Willian, who ran clear and drove a shot into the far corner.

The third goal came from another counterattack as City piled forward, this time Hazard outpacing Aleksandar Kolarov and smashing a finish past Bravo.

The ugly scenes at the end were sparked by Aguero's lunge on Luiz as the defender came across to clear the ball. There was pushing and shoving — and a bit more by Fernandinho — as both sets of players clashed on the field.

Much has been made of the renewal of the managerial rivalry between City's Pep Guardiola and Man United's Jose Mourinho this season but it seems Guardiola rates Conte as his biggest managerial rival, having described the Italian as a "master tactician" and "maybe the best" manager in the world.

This defeat shows just why.