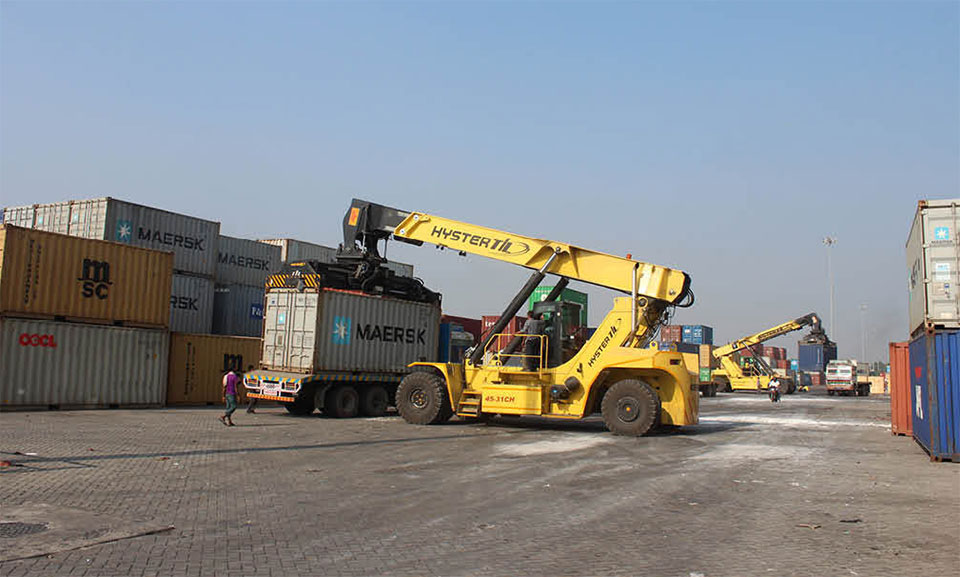 Containers that have been imported from foreign countries in Birgunj dry port.Photo: Ritesh Tripathi/Republica

BIRGUNJ, Aug 27: When the dry port came into operation at Sirsiya of Birgunj in the Fiscal Year 2004/05 only 85 rakes with full cargoes entered Nepal in a year. The import rate of bulk cargo and bag cargo was zero. After one and a half decades of its operation, over 100 rakes enter Nepal every month.

Cargoes loaded in 104 rakes were imported in Nepal in the first month of the current Fiscal Year 2019/20, of which 60 rakes were loaded with containers. Ninety containers of 20 feet come in a single rake.

Few years ago, it was unimaginable that over hundred rakes would enter the country in a month through the port carrying such large quantities of goods. With the increasing imports, the only dry port that is linked to India's port through rail, the Birgunj dry port has been put into maximum use exceeding its physical capacity. Consequently, expansion and upgrading of its physical infrastructure is being discussed.

Umesh Shrestha, chief of customs office at the dry port, said bulk cargoes and bag cargoes from India and goods in container are imported from third countries.

Foreign goods in 47,846 containers were imported through Birgunj dry port in the last Fiscal Year 2018/19. Bishnu Kant Chaudhary, CEO of Himalayan Terminals said that importers preferred railways over roadways and the import rate of Nepal is increasing because of which more than 100 rakes of goods entered the country in a month. He stated that being able to handle more than hundred rakes adds enthusiasm among them.

The increasing number of imports has created concern among stakeholders. "The infrastructure of the dry port is insufficient for imports, what will happen in the future?" questioned Ashok Temani, member of Federation of Nepalese Chambers of Commerce and Industry and president of Road Transport and Transit Committee. "Will the dry port be able to withstand the import of clinker's rake that are unloading in Muzaffarpur, about 50 rakes of goods that are unloading in Raxaul, and cargoes diverted from roadways to railways that are yet to enter the dry port?"

BIRGUNJ, Dec 13: The volume of import to Nepal from third countries has declined by 20.41 percent. According to the... Read More...