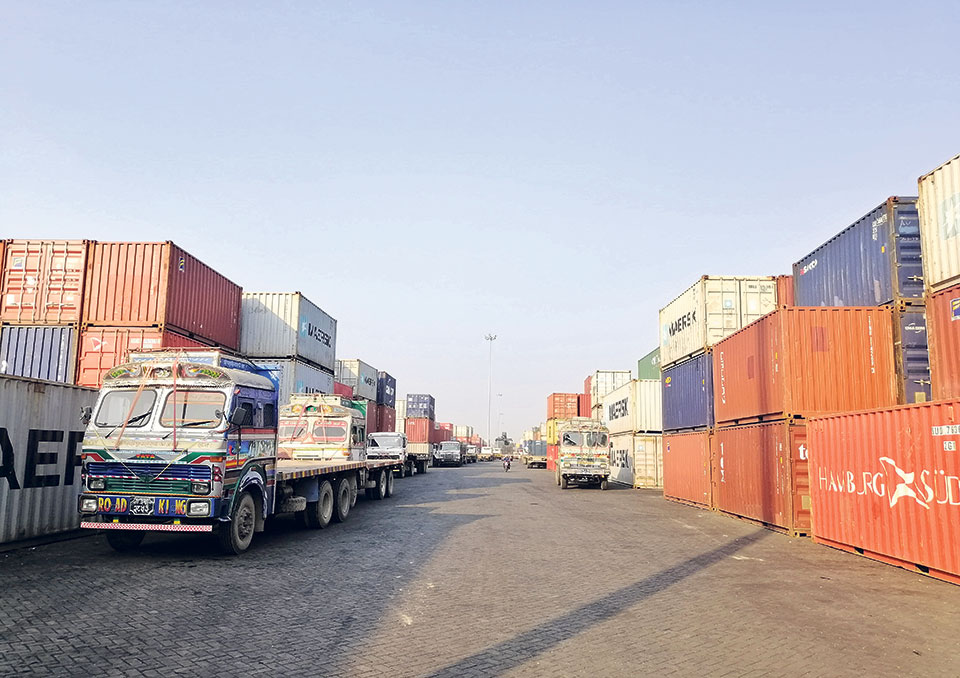 BIRGUNJ, Dec 13: The volume of import to Nepal from third countries has declined by 20.41 percent. According to the latest data from the Kolkata Port in West Bengal, Haldia Port in Kolkata and the privately-managed port of Visakhapatnam in Andhra Pradesh, lately the import of container cargo has declined.

Laxman Khadka, branch manager of the Nepal Transit and Warehousing Company in Kolkata, India, said that the decline in cargo coming from overseas through the Indian ports has reduced the import from abroad. According to him, 373 rack container freight trains have arrived at Birgunj dry port from Kolkata and Bishakhapatnam ports. There are 90 containers of 20 feet units in one rack. In this regard, 33,570 containers have arrived in Nepal by train from the Indian ports. Another 22,094 containers have entered Nepal via road.

Nepali importers and traders say that the impact of the global pandemic has also affected Nepal's industry and trade. They say despite the lifting of the nationwide lockdown and prohibitory orders around the cities, CORONA's fear remains in the industry. The raw materials imported by the industries, semi-finished raw materials and ready-made goods to be consumed in the Nepali market are imported from third countries.

Ganesh Prasad Lath, an importer, said that the industries have also reduced production as the market has shrunk. He said it will take some time for businesses to return to normal. Similarly, the consumption of finished goods in Nepal seems to have declined due to the lack of spending capacity of the general public because of the pandemic.

The government had imposed a nationwide lockdown since March 24. Even though the lockdown was lifted, prohibitory orders were issued in places like Birgunj for an additional two months.