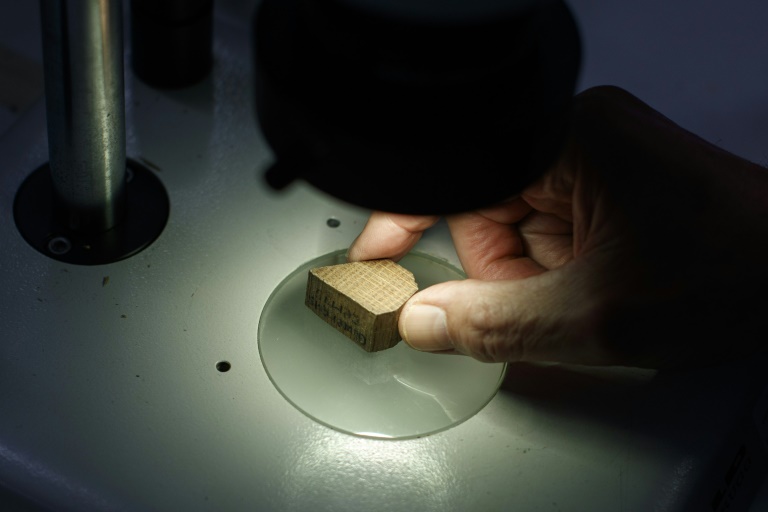 A timeworn laboratory in Britain's Royal Botanic Gardens may not seem like the obvious epicentre of efforts to halt international illegal logging.

Beakers bubble away on a hotplate, while suspect guitars that have been sent by customs officials for testing sit on top of shelves lined with tattered old journals and reference books in a multitude of languages.

But scientists at the Wood Anatomy Laboratory, part of the research centre at the gardens in Kew, southwest London, are working on a new global project to help precisely identify the origin and species of timber.

Illegal logging is estimated to account for 15 to 30 percent of all timber traded worldwide, according to Interpol, with an estimated annual value of $51 billion to $152 billion (45 billion to 134 billion euros) in 2017.

Much of the import and export business relies on paper trails for verification.

However experts hope that their new project can, in future, provide enforcement agencies with some hard science that can quickly identify through checks whether a wood species is as claimed, and exactly where it was grown.

Chunks of wood from Laos are stacked in a pile, alongside other slices of timber with yellow sticky notes identifying them.

The laboratory's samples originate from far and wide and some date back well over a century.

Lying around besides the Leica and Nikon microscopes is a piece of African blackwood collected during British explorer David Livingstone's Zambezi expedition, dated 1860.

There is method however in the apparent miscellany at one of the world's largest wood sample collections.

Six chests of drawers hold 100,000 microscope slides of fragments, sorted in Latin by family, genus and then species.

Each specimen contains three different slices through the wood: transverse, tangential and radial.

"We're trying to build up and future-proof the reference collection of wood samples of all the commercial timbers used in the world," said Gasson.

"We want a big, comprehensive library -- and that's going to take a long time," added the expert, who started his life's work in the Kew lab as a student in 1977.

While the Kew experts have the know-how to identify the species, they need help pinpointing where the tree originates, an expertise being provided by a separate partner team in northern England.

By combining the wood analysis at Kew with isotope testing of different timbers in Yorkshire, the project should provide law enforcement agencies with a key tool to help rapidly establish whether the timber has come from legal sources.

AFP / TOLGA AKMENPeter Gasson, research leader in wood and timber at the Royal Botanic Gardens, says they hope to "build up and future-proof the reference collection of wood samples of all the commercial timbers used in the world"

Kew will be able to determine the species of wood and the so-called stable isotope testing -- looking at the chemical composition within the wood and patterns reflecting local rainfall and prevailing winds -- can identify where the tree was grown.

The project is also in partnership with the Forest Stewardship Council (FSC), a not-for-profit body certifying sustainably-managed forests around the world which account for about 10 percent of the planet's productive forests.

The 200 million hectares of FSC-certified forests hold around 2,000 species and the Germany-based organisation will be collecting geo-referenced samples to start amassing the database for use in fighting illegal logging.

Michael Marus, FSC chief information officer and information technology director, said: "The science is there; what is needed is reference samples from forests which contain location data.

"Complex compounds create a type of isotope fingerprint that can be measured and obtained," he told AFP.

"The science can get us down to even 10 kilometres (six miles) to the source of something."

These scientific tools could help save forests that are crucial for environmental, economic and social sustainability, and combating climate change and biodiversity loss.

Marus noted that if law enforcement agencies can rule out wood from certified legal origins, resources could be freed up to target illegal imports and exports.

AFP / TOLGA AKMENIllegal logging is estimated to account for 15 to 30 percent of all timber traded worldwide, according to Interpol

"Illegal logging is one of the most massive global forest-related problems," he said.

"Maybe it's not mainstream with consumers but it's on its way. They are looking to make good choices and they want to trust those.

"Finding where the materials are flowing through the supply chains will help us identify who is involved and what is going on."

Gasson cited examples of plywood exported from China, made with layers of different woods imported from other countries.

"With the anatomy and stable isotopes, it should be possible to say, 'you're claiming this wood came from the Solomon Islands when actually it came from Papua New Guinea'," he said.

"People will be wary about doing it if they think they will get caught. It will act as a deterrent."

Britain to spend an extra £2.1 billion on no-deal Brexit planning

LONDON, August 1: Britain said it is ramping up preparations for a no-deal Brexit by spending an extra 2.1 billion... Read More...