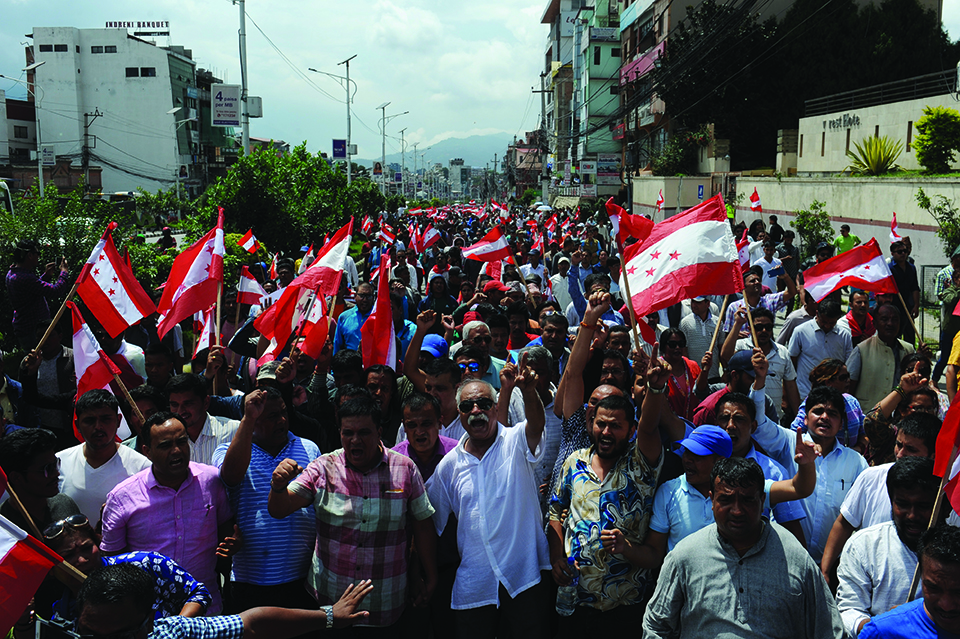 For the last ten months, Nepali Congress was consistently criticised in the media for being ‘lifeless opposition’ in the parliament.  On Sunday, the party asserted itself showing that it will no longer remain a meek force in the days to come. It seems the party was waiting for the right time to get the government heed its concerns.

During the 1990s, CPN-UML acted as a fiery opposition obstructing the parliamentary proceedings and creating havoc in the streets. In 1994, the parliament was obstructed for record 57 days. During the second Constituent Assembly, which also functioned as a legislature-parliament, the House was obstructed by CPN (Maoists).

Congress stood as an opposition force for 30 years during the Panchayat.  Its leaders were in exile. It returned to power only after 1990’s political change. Post-2006, Congress did not perform very well. It became the largest party only in 2013 Constituent Assembly elections. The newly elected parliamentary party leader Sher Bahadur Deuba allocated posts of chief whip and whips of the party to those parliamentarians elected through Proportional Representation system.  Chief Whip Balkrishna Khand did not even oppose the government policies and program.

Congress has risen now. The party has made Krishna Bahadur Mahara, the speaker of the House, fix the timer. Mahara was found cutting mikes of opposition members even before their allocated time was over.  Gagan Thapa became the victim of such unruly behaviour of the speaker. The speaker admitted to this mistake later on. Now the party seems to be in offensive mood.  So what is the secret of this new confidence?

The recently concluded Congress Mahasamiti re-energised the party rank and file. Party president Deuba delivered a well-crafted speech on the first day of winter session. He questioned the government on many fronts. It was good indication of Deuba’s growing confidence.

On Sunday, the Prime Minister spoke for more than one hour. He jumped from one rhetoric to rhetoric. He distorted the facts and presented wrong picture of economy. In ten months, the government has not been able to ensure minimum level of governance. It has failed to arrest the rapists and murderers of Nirmala Panta and bring to book the gold smugglers. This is why Prime Minister seemed less confident while speaking in the parliament.

Congress waited for 10 months, watching every move of the government. It did not obstruct the House for a single time. It supported Dr Govinda Kc’s Satyagraha and protests for justice for Nirmala Panta. The government somehow addressed Dr KC’s some of the concerns but it has not done anything about Nirmala Panta’s case. Congress, therefore, had to rise. In concluding session of Mahasamiti meeting, Deuba had instructed the cadres to remain alert about the government move. Sunday’s opposition is the first event after Mahasamiti Meeting.

Congress has tried to hold the government to account for its wrongdoings. It has not resorted to street protests like UML did in the 1990s. It was waiting for the opportune moment. The moment came when the speaker denied the opposition benches the time to question the PM. Parliamentary procedure clearly mentions that Prime Minister needs to answer the queries of opposition immediately after he addresses the parliament. On Sunday, opposition was not allowed to even ask questions.

Parliament is where opposition and ruling parties debate in a healthy manner. Ruling party cannot and should not skip questions raised by the opposition. Prime Minister must live by his promise because what he says is the parliament remains as a record. Opposition reminds the government to fulfil people’s aspirations when the government fails to do so.