Only 70 samples tested on an average per day after lockdown 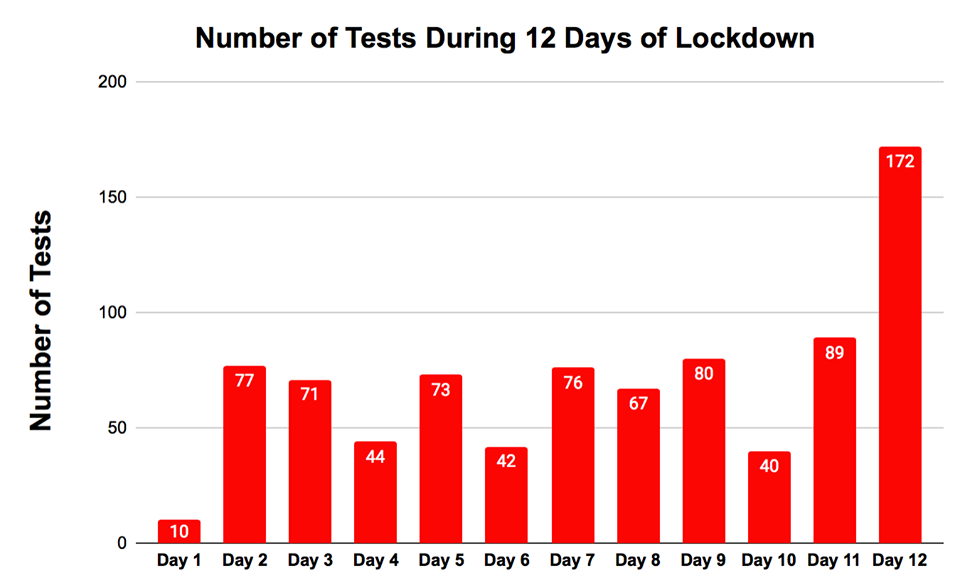 KATHMANDU, April 5: Although the World Health Organization has been urging the countries across the globe to 'test, test, test' in order to control the possible outbreak of COVID-19, the government of Nepal has only tested around 850 suspects in the last 12 days since the lockdown was imposed on March 24.

The government had enforced a nationwide lockdown in a view to contain the possible outbreak of the coronavirus, but only a total of only 841 tests have been conducted so far, which is just 70 tests a day on an average.

After the first case was confirmed in late January, the government has altogether tested 1,441 suspects, which is relatively low in comparison to the testing conducted by countries like South Korea to contain the outbreak. As per several media reports, the South Korean government tested almost 8,000 suspects per a million population since the beginning of the outbreak.

Looking at the worldwide scenario, it is already clear that delay in aggressive testing will have unwarranted consequences. For instance, the United States of America, which has also been testing aggressively, has not been able to contain the outbreak, as the country had started aggressive testing of suspects belatedly.

Unlike these countries, Nepal doesn't have enough capacity to test samples of the suspects. “The government has a capacity to test almost 4500 swab samples in a week,” said Dr Bikash Devkota, spokesperson at the Ministry of Health and Population, adding that the testing facilities have been expanded in several areas such as Janakpur, Hetauda, Dharan, Dhangadhi, Pokhara and Surkhet. He also said that the testing facilities in Chitwan and Butwal will come into operation from Sunday.

“The government did not realize the urgency of importing testing kits though the first case was confirmed in late January. Even the government knows the testing has not been conducted in an aggressive manner,” a doctor told Repubica on condition of anonymity, adding that thousands of Nepali citizens have entered Nepal from the open border just before the lockdown started.

“The government does not even have proper data. How can the government control the possible outbreak if it doesn't test people in the border areas?” the doctor questioned, adding that all the suspects should be tested and put in isolation.

“If the disease is transmitted from person to person rapidly, the government will be unable to trace the contacts of the infected individuals. So there is no other option than to increase testing capacity before it is too late,” Dr Subedi said, adding that testing should be conducted at places where there are active cases of COVID-19.

Issuing a press statement, the main opposition also asked the government to put all the citizens strictly in quarantine to contain the outbreak.

KATHMANDU, March 15: The government has extended the COVID-19 lockdown until April 27 continuing the suspension of all government services... Read More...

Central Committee of the CPN (US) meeting today
52 minutes ago