Obstructed Pasang Lhamu Highway resumes after one and half months 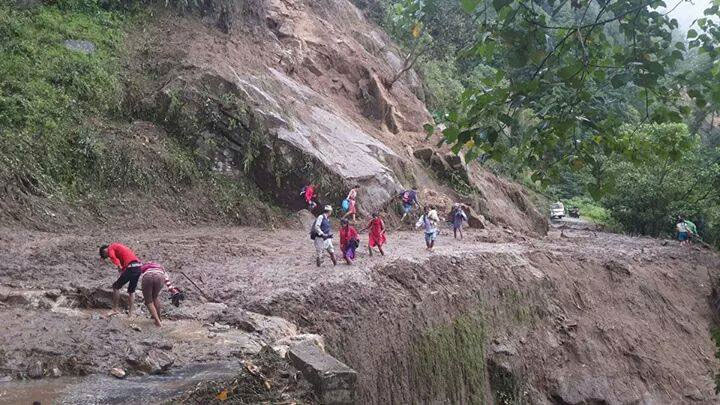 RASUWA, Sept 22: The obstructed Pasang Lhamu Highway has resumed after one and a half months, allowing smooth passage of vehicles. The road was disrupted since August 10 due to landslides near Banuwa at Uttar Gaya Rural Municipality-5 in Rasuwa district. Around 70 meters of road was damaged in the disaster.

A Gabion wall has been constructed in order to resume the transport service, said the Division Road Office, Nuwakot. Vehicles laden with goods from neighboring China and other vehicles heading to Kathmandu have used the routes.

The road initially named as the Trishuli-Somdang was constructed in 2040 BS. It got damaged at Banuwa after the flood caused by torrential rains on August 9 could not drain out without a proper highway drainage system, said authorities.

However, it will take some days to completely remove the debris, said Rabindra Budhathoki, managing director of the construction company.

CHITWAN, May 20: The Narayangadh – Muglin route that was blocked following a landslide at 5:30 am today resumed. ... Read More...

CHITWAN , May 20: Vote-count halted since Friday night following row over vote-counting of Ward-9 has been resumed in Bharatpur... Read More...

KATHMANDU, Aug 11: The power supply in Tatopani region has resumed as it was obstructed by a sudden flood occurred... Read More...

1,051 people infected with dengue in a single day
46 minutes ago