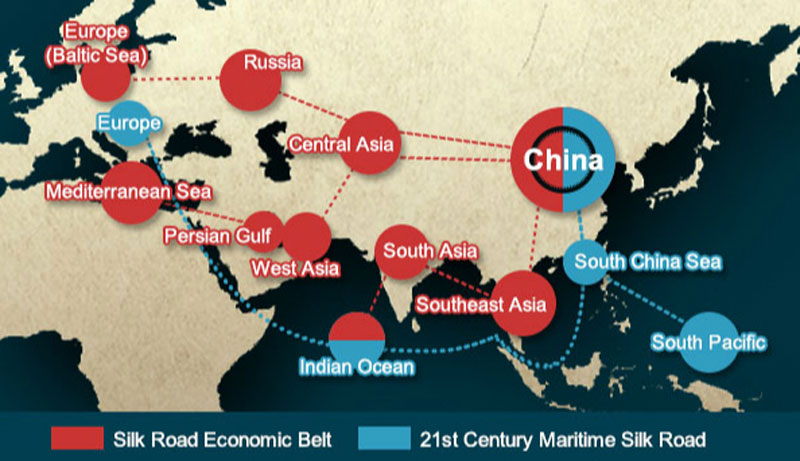 Nepal, which faces high trading costs due to its land-locked status, could immensely benefit from improved connectivity
Nepal has had long and historic ties with China, Tibet and India. At one period of time all three countries—Nepal, India and China—were prosperous and Nepal was a trade route between India and China. But this linkage was broken after the 18th century, especially after the colonial Britain rulers shifted their focus to opium trade with the eastern coast of China through Sikkim’s Nathu La pass. However, there is no reason the old route cannot be revived.

If we can achieve cross-border connectivity with the Association of Southeast Asian Nations (ASEAN) and the People’s Republic of China (PRC) we could turn Nepal into a ‘land-linked state’ from a ‘land-locked’ country and rev up its “engines of growth.” After all, Nepal was once strategically located on Southwestern Silk Road (SSR).

A number of factors have opened up the possibility of connectivity. Nepal has a multi-track approach to promoting regional cooperation and integration with its neighbors, but more needs to be done. China’s One Belt One Road (OBOR) brings great opportunity for Nepal. The 14th National Periodic Plan also prioritizes projects to convert Nepal into a land-linked state and achieve Sustainable Development Goals by 2030.

Nepal, which faces high trading costs due to its land-locked status, could immensely benefit from improved connectivity within South Asia. Studies have shown that cross-border corridors can drive economic growth and lead to win-win for all, especially landlocked countries. Currently, Laos, Mongolia and China have adopted a connectivity-driven strategy. Nepal needs to follow suit.

Lhasa of Tibet is emerging as a major transportation hub in western China. China has announced another railway to connect Lhasa with Chengdu of Sichuan. Chinese growth centers and manufacturing hubs are thus moving closer to Nepal. This could prove to be a great asset for Nepal.

Nepal and India are linked by age-old geographic, cultural, social and economic ties. Extensive trade relations between Nepal and India date back to the golden age of Gupta period beginning in 320 AD. This continued during British colonial rule and remains intact to this day. While trading with India is important for Nepal, India’s motivation for trading with Nepal is largely strategic: the volume of trade it’s with Nepal is miniscule as compared to India’s global trade volume. Besides, Nepal-India relations are burdened with difficulties, due to asymmetric power relations between the two countries.

Nepal’s cultural and economic ties with Tibet were also quite extensive. There are hundreds of caves in the upper Mustang filled with magnificent centuries-old Hindu and Buddhist paintings. These vast cave settlements are proof that pilgrims from Tibet and India visited Nepal since ancient times (Bohara 2010).

On the commercial front, Nepal and Tibet traded salt, rugs and spices for centuries. Nepal used to have a strong business presence in Lhasa.

Further, Nepal, acting as a gateway to India and China, benefitted immensely. The major cities of Nepal were prosperous during much of the Moghul era in India and Tang dynasty rule in China. The Licchavi and Malla kings in the 14th and 15th centuries encouraged cross-flow of business between the two countries. One Licchavi king, Angsuverma, even got his daughter, Bhrikuti, married off to the emperor of Tibet.

This historic link can be revived through OBOR for it aims to integrate Asia, Africa and Europe through deepened diplomatic, commercial and financial cooperation, as well as improved infrastructure development for ‘global connectivity’. This will benefit Nepal as well. OBOR can fill the capital gaps in five major areas of mutual interest: policy coordination, infrastructure construction, unimpeded trade, financial integration and people-to-people ties.

Greater connectivity will be a win-win for Nepal, India and China. For example, the travel distance from China to India is almost three times the distance from China to India via Nepal. China seems committed to improved international governance and increased representation of developing countries in global affairs. So the belt-road initiative may well boost our economy and create many new jobs.

This ‘land-link’ Nepal should connect not just India and China but all of South Asia, Central Asia and East Asia. Nepal was an important land-link on the South-western Silk Road and this is a compelling reason to revive the land-link role of Nepal.

The author is a former member of National Planning Commission, Nepal