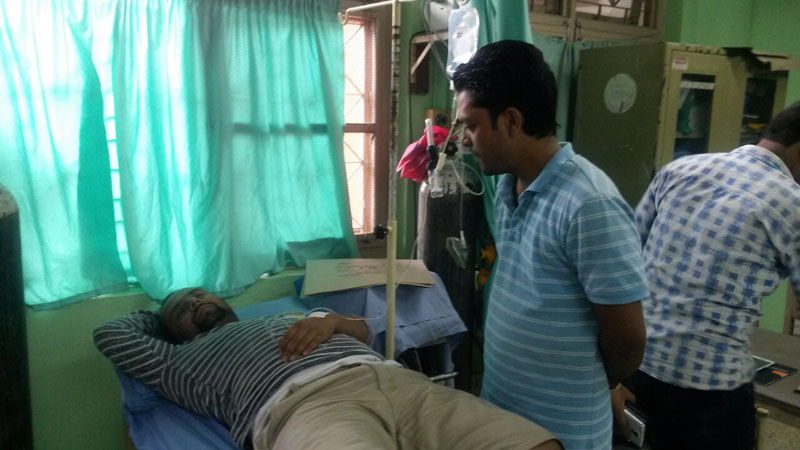 NSU former central member Ganesh Sapkota who has been on a fast-unto-death since last eight days has been hospitalized after his health condition deteriorated. (Krishna Dhungana/Nagarik)

KATHMANDU, Aug, 6: Nepal Students Union, the sister wing of Nepali Congress, leaders Ganesh Sapkota and Ratnahari Dhungel have been staging a fast-unto-death for the last eight days demanding correction in the representatives selection for the convention.

Student leaders Sapkota and Dhungel have been hospitalized at Bagbazaar-based Kathmandu Model Hospital after their health condition deteriorated.

They have been transferred to Kathmandu Model Hospital from Sanepa and are now undergoing treatment at the emergency ward of the hospital.

Former central member of the NSU Sapkota and Dhungel were staging the hunger strike at the NC Central Party headquarters in Sanepa since last Saturday.

The hunger strike has piled pressure on NC President Sher Bahadur Deuba after their health condition is deteriorating.

The agitating leaders have been accusing NSU President Ranjit Karna of selecting representatives arbitrarily. They maintain that the representatives were selected against the regulations of the organization in the 22 districts.

A committee has been formed under the coordination of NC central member Prakash Sharan Mahat to hold the NSU’s convention.

The 11th Convention of the NSU is beginning from tomorrow (Sunday).

RAJBIRAJ, Nov 1: District youth leaders from Saptari have begun a fast-unto-death from Tuesday to their dissatisfaction over party’s decision... Read More...

COVID is less severe with Omicron than Delta, U.S. study suggests
23 minutes ago