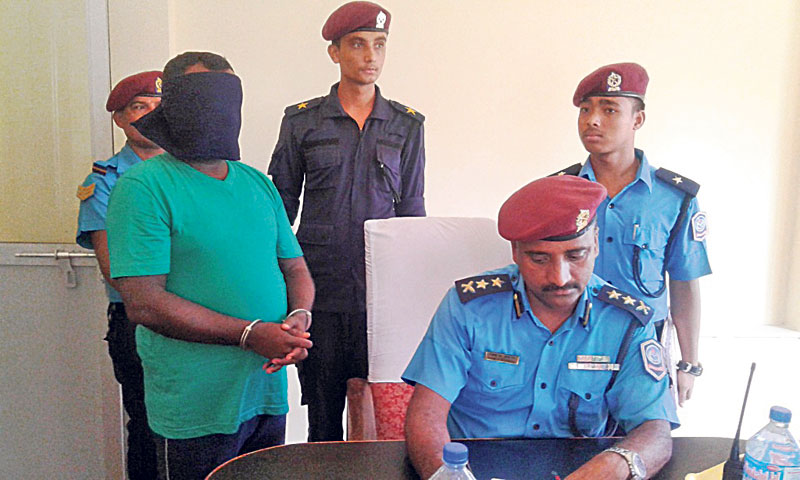 RAJBIRAJ, Sept 10: Despite being an Indian national, notorious criminal Mohammad Mastakim Hussein aka Rais Miyan, who has been accused of seven murders in Saptari and Sunsari districts, had been issued with a Nepali citizenship and three different passports.

Mastakim, originally from Madhubani, Bihar of India, had claimed his citizenship from Sarashwar -7 of Saptari. The record of District Administration Office (DAO), Saptari, shows that he was issued the citizenship on March 24, 2007.

“His citizenship mentions that his father's name is Miya Kujaja, who actually may be his father-in-law. We have begun investigation on the matter and everything will be revealed in a few days,” he added.

After establishing his involvement in various murders, the police had launched a manhunt to arrest Mastakim some years ago. The operation became successful four days ago when he was arrested from Tribhuvan International Airport. A Machine Readable Passport (MRP) was confiscated from his possession.

“It is possible that the accused had forged citizenship and passports to avoid arrest,” said Deputy Superintendent of Police (DSP) Dan Bahadur Karki, who is investigating the case.

Similarly, notorious Indian criminal Dhirendra Yadav, an escapee of Jhumka prison, had also managed to get citizenship from two separate VDCs of Saptari and Sunsari districts.

He reportedly took two Nepali citizenships believing that it would be easier to commit criminal activities by staying in Nepal.

Another notorious criminal, Subash Jha of Supaula district of Bihar, also had a Nepali citizenship. Jha who is accused of multiple murders, kidnapping, robbery, and seeking ransom, had entered Nepal after escaping from Indian Police. He was issued with the citizenship from Haripur VDC, Sunsari, with a new name of Harish Chandra Jha.

It is said that Jha was also involved with Janatantri Tarai Mukti Morcha party as its district in-charge. He was arrested with possession of weapons, but managed to escape from jail.

“In order to invite change, one should have the audacity to fight the status quo,” asserts Meera Dhungana, Advocate and... Read More...

Criminals have no land to hide

We are hopeful that the conference will be instrumental in crime controlling and a forum for dwelling on crimes and... Read More...

PHOTOS: COVID-19 patients being treated in hospital corridors
17 hours ago

Hamas hits deep in Israel, which vows to keep pummelling Gaza
15 minutes ago

Where to contact if someone needs Remdesivir?
24 minutes ago

Bodies float down Ganges as nearly 4,000 more die of COVID in India
23 hours ago