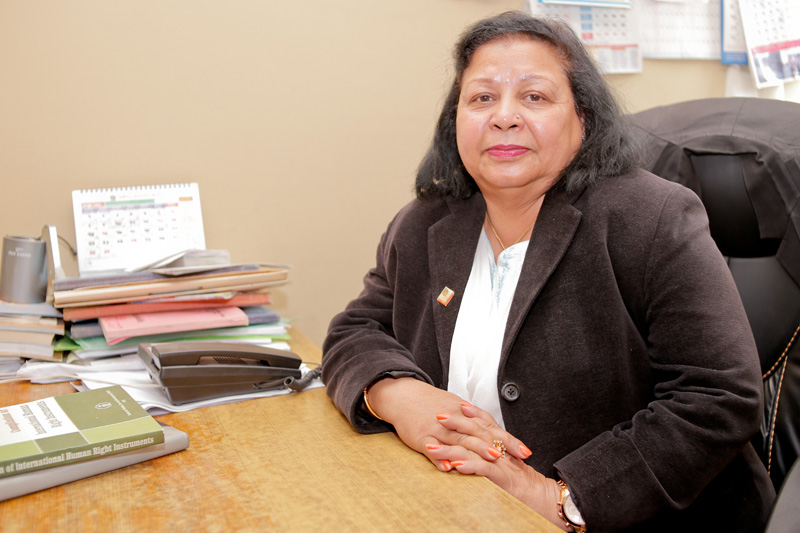 “In order to invite change, one should have the audacity to fight the status quo,” asserts Meera Dhungana, Advocate and Chairperson of FWLD (Forum for Women Law and Development). At a young age of 28, she filed the petition on equal distribution of parental property between son and daughter, which was a landmark case in the judicial system of Nepal. Moreover, she has filed about 70 petitions and have been advocating for the last 25 years.
In conversation with to Republica’s Sonam Lama, she talks about her inspiration, challenges and the stature of women in Nepal.

What was your early inspiration to initiate this journey?
Society has always marked boundaries of restriction to women. As a woman, I was no exception. My early attempt to eliminate gender inequality began from my home where my brothers would have a blissful time playing outdoors after school but I was bound to household chores even if I was younger to them. I would observe the situation of women around me which would arouse an intense urge for a change. Thus, the realization for equality rather was the source of my inspiration.

What challenges did you come across in your endeavors?
I went through a tough phase during my initial struggle because equal division of parental property had challenged the law itself and it was considered unacceptable to question the decisions of law. After we filed a petition for equal division of parental property, I barely came across people who stepped ahead with a positive feedback.

What issues of violence against women are prevalent in the context of Nepal?
The issues are most often related to domestic violence. There was not any justice for the women who were the victims of marital rape before we filed a petition in 2001. Afterwards when the petition was addressed by the high court, there was the provision of 3-6 months of imprisonment for the perpetrator which was extended to 3-5 years of imprisonment in the 2016 constitution.

Legally speaking, what improvements have you found about women so far?
Even though the law has been progressive, there is still a lot be improved. When it comes to conferring citizenship, women’s identity as a mother is still questioned. A child of a Nepali father and a foreign mother can get citizenship by descent. But a child of a Nepali mother and a foreign father is conferred naturalized citizenship dependent on the government.

Would you like to convey any message on the occasion of women’s day?
I believe women are equally capable to shoulder every responsibility they are assigned with. It has become crucial to understand that every human, regardless of sex, age, status and ethnicity possess equal right and dignity.  In order to foster women’s participation in every field, it is fundamental to acknowledge their subjugation in the first place, once they get aware of this fact, they can measure a firm path toward their betterment.

Women have opportunity from parliament to local level-President

BHAKTAPUR, August 22: President Bidya Devi Bhandari has said that opportunities have now come before the women from the parliament to... Read More...

IPOs worth Rs 1.21 billion to be issued
39 minutes ago