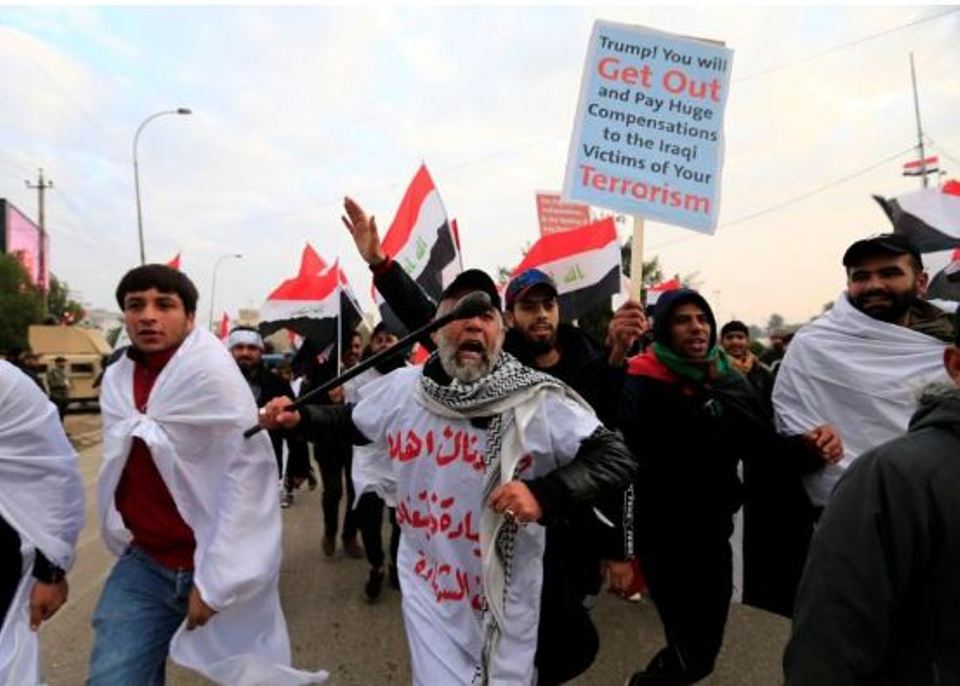 Supporters of Iraqi Shi'ite cleric Moqtada al-Sadr protest against what they say is U.S. presence and violations in Iraq, during a demonstration in Baghdad, Iraq January 24, 2020. REUTERS/Thaier al-Sudani

BAGHDAD, Jan 24: Thousands of Iraqis rallied at two central Baghdad intersections on Friday after a prominent cleric called for a “million strong” protest against the American military presence, following the U.S. killing of an Iranian general and an Iraqi militia chief.

The march called by Moqtada al-Sadr aims to pressure Washington to pull out its troops, but many anti-government protesters fear it could overshadow their separate, months-long demonstrations that have challenged Iran-backed Shi’ite groups’ grip on power.

Sadr opposes all foreign interference in Iraq but has recently aligned himself more closely with Iran, whose allies have dominated state institutions since the U.S.-led invasion of Iraq in 2003.

“We want them all out - America, Israel, and the corrupt politicians in government,” said Raed Abu Zahra, a health ministry worker from southern city of Samawa, who arrived by bus at night and stayed in Sadr City, a sprawling district of Baghdad controlled by the cleric’s followers.

“We support the protests in Tahrir as well, but understand why Sadr held this protest here so it doesn’t take attention from theirs,” he added.

Men and women marched waving the red, white and black national colors, and chanted slogans against the United States, which leads a military coalition against the Islamic State militants in Iraq and Syria.

“DO NOT CROSS THIS BARRIER”

Some were wearing symbolic white robes indicating they’re willing to die for their country while others sat looking out over the square from half finished buildings, holding signs reading “No, no, America, no, no, Israel, no, no, colonialists”.

It is unclear if the march will end up at the gates of the U.S. Embassy, the seat of U.S. power in Iraq and the scene of violent clashes last month when militia supporters tried to storm the compound.

Main roads in Baghdad were barricaded by security forces and the city’s Green Zone, which houses foreign missions, were blocked off with concrete barriers. Outside the U.S. embassy, a sign reads “Warning. Do not cross this barrier, we will use pre-emptive measures against any attempt to cross”.

The U.S. killing of Iranian military mastermind General Qassem Soleimani in Baghdad this month has raised the specter of more civil strife in a country torn by years of sectarian conflict.

For the first time in nearly two years, parliament voted along sectarian lines to press the government to kick out U.S. forces. Shi’ite parties voted in favor, while Sunni Muslim and Kurdish lawmakers boycotted the session.

WASHINGTON, Jan 30: The spotlight on brain injuries suffered by American troops in Iraq this month is an example of... Read More...

BAGHDAD, DEC 31: The U.S. ambassador to Iraq and other staff were evacuated from their embassy in Baghdad for their... Read More...

Gold price up by Rs 200 per tola, silver price remains stable
36 minutes ago

Light to moderate rain forecast for today
39 minutes ago