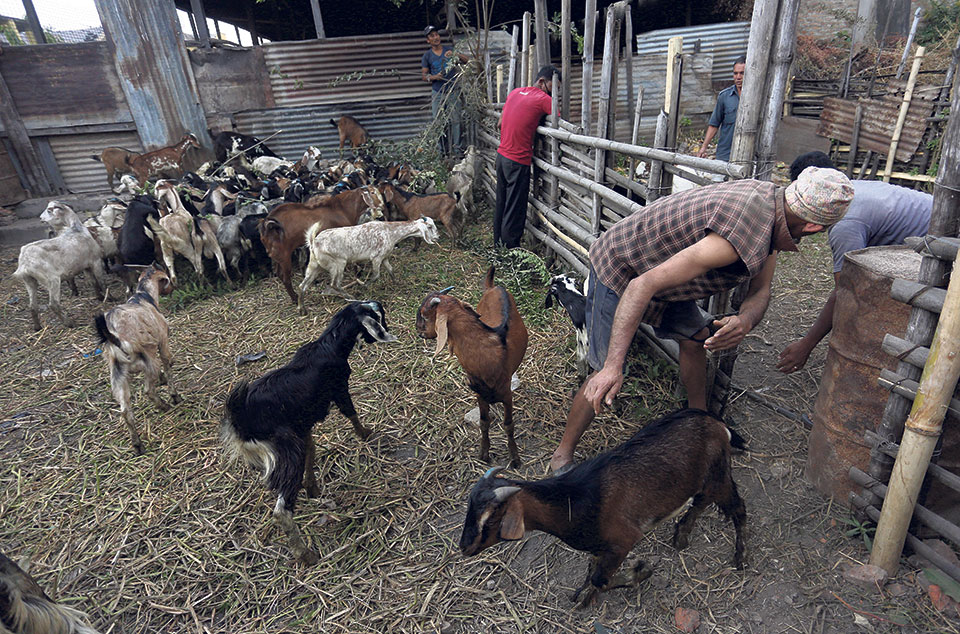 Workers at the Nepal Food Corporation depot at Thapathali, Kathmandu on Thursday count goats brought from various districts for the Dashain festival. The corporation will start selling goats and mountain goats from the depot from Friday. Photo: Dipesh Shrestha/Nagarik/Republica

KATHMANDU, Oct 12: The National Food Corporation (NFC) has fixed the prices for live goats and mountain goats at Rs 710 and Rs 510 per kg respectively.

The prices have been fixed by adding transport cost and local taxes to the actual cost of the animals, according to the NFC.

The price fixed by the NFC is lower than the market price.

Nepal Livestock Traders Association is selling mountain goats at Rs 750 per kg whereas price of Nepali goats varies between Rs 515 to Rs 530 and Indian goats sell at Rs 550 per kg, according to Deepak Thapa, ex-chairman of association.

The price of Indian goat has increased due to import taxes, according to the traders. Livestock traders have already sold more than 4000 goats so far and many of them were sold to local meat shops, according to Thapa.

Officials claimed all imported goats were examined by vets before importing them to Nepal.
Thapa meanwhile blamed the ‘multiple taxes’ imposed on livestock imports for the higher prices.

POKHARA, Sept 26: For many, Dashain is a festival about good food. And for meat lovers, obviously, meat is a major... Read More...

NFC to begin sale of goats for Dashain from tomorrow