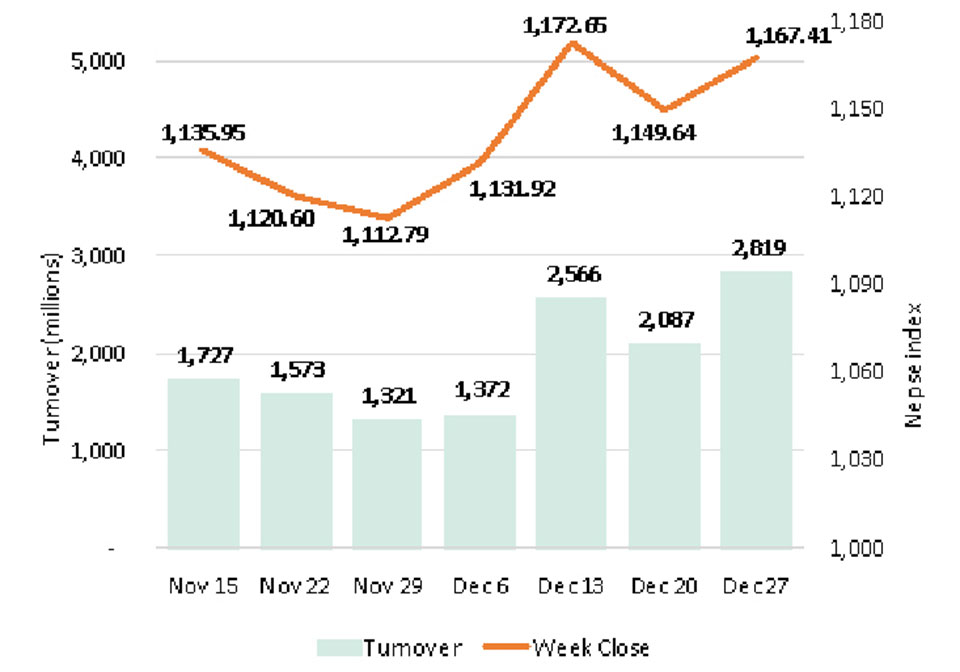 KATHMANDU: The Nepal Stock Exchange (Nepse) witnessed somewhat lackluster trading on Sunday, as the index traded within a narrow span before ending the session marginally up by 11.18 points.

Nonetheless, buyers dominated Monday's trading as Nepse rallied 17.76 points in the session. The index pulled back slightly on Tuesday with a 2.37 points drop, while the index alternated between minor gain and loss in Wednesday and Thursday's sessions.

The index, which corrected almost 25% from its early December rally in the prior week, held ground in the review period. Hence, the short term sentiment still remains fairly bullish where another rally might see the market make further improvement.

The December's rally was mainly fueled by investors accumulating stocks at a bargain as Nepse fell close to its multi-year low of 1,100 points. The buying pressure was mainly seen in insurance stocks.

Further, the general prices are still a good bet for value investors and subsequently, the index has resisted faltering further. With exception of slight corrections, considerable slump is unlikely in the present context.

Sensitive index, gauging performance of Class 'A' stocks, also closed in green with a 1% gain.

Most of the sectors saw strength in the week with only Hydropower and Mutual Fund sectors declining marginally. Manufacturing & Processing sector shot up by almost 8% as Shivam Cements Ltd staged a notable recovery after tumbling to around Rs. 350 per share. Trading sub-index also surged by 7.1% backed by a sustained rally in shares of Salt Trading Corporation which hit its fresh high on Thursday. The trading company closed at Rs 1,754 per share.

'Others' sub-index rose 6.14%, while Life Insurance and Hotels sub-indices registered advances of over 3% each. All other sectors ended the week-on-review slightly higher.

In terms of market activity, Nepal Bank Ltd's shares were traded the most. Rs 33 million worth of the government led bank's shares changed hands.

The bank closed its shareholder's book on Friday for the purpose of convening its annual general meeting (AGM) where it will be endorsing 25% dividend including 15% bonus shares and 10% cash payout.

Nabil Bank Ltd, NMB Bank Ltd and Himalayan Distillery Ltd were among other active scrips of the week.

Similarly, 400,000 units of Convertible Preference Share of Everest Bank Ltd were also converted and listed as ordinary shares in the week.

On the weekly timeframe, the index formed a bullish candlestick helping the bourse erase most of its prior week's losses. Meanwhile, weekly Moving Average Convergence Divergence (MACD) has formed a golden cross suggesting possibility of further upward movement.

Relative Strength Index (RSI) also indicates the market gaining momentum in the present context. However, for a meaningful rally to follow, the breach of 1,800 points mark will be pivotal.

Dr KC is “emotionally blackmailing” the government: Minister Bhattarai
17 hours ago
Police drag Dr KC out of ambulance, forcibly take him to Trauma Center
19 hours ago