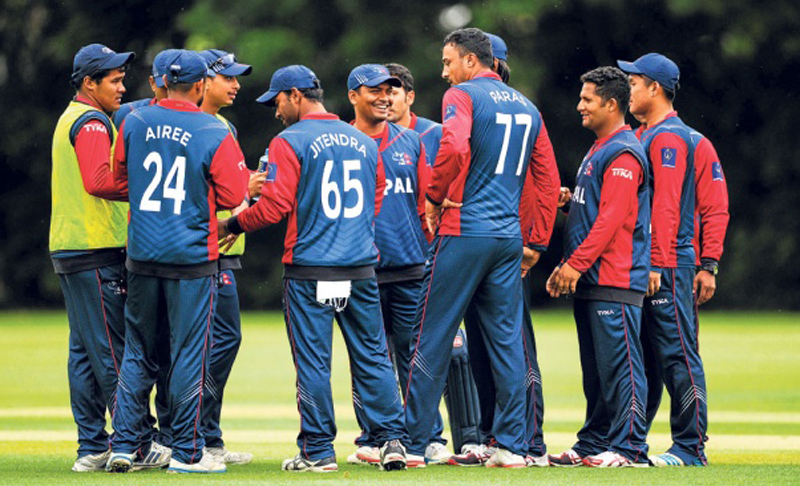 If ICC World Cup is reading a science-fiction story written by a world renowned writer, ICC World Cricket League Championship is a novel written by little known writer which mostly nerds and peoples who belong to the writer’s home country know about. Sometimes stakes involved in it for the participating nations do make the noise which is heard by the mainstream cricket followers. But mostly it is left to fans and experts from the respective participating countries.

The ICC’s one-day version of Intercontinental Cup has its own pros and cons. Eight promoted & qualified associate teams participate in three years long league. The top four teams join the lowest ranked four teams from the ICC ODI rankings table (as on September 2017) to feature in the 2018 Cricket World Cup Qualifier, whereas the bottom four teams will be relegated to Division Two and play with the finalists of Division Three for the remaining two spots in the 2018 CWC Qualifier.

The recent edition is already in its final year. At least six teams still has the realistic chance of qualification. Nepal is one of them currently sitting at sixth with eight points. Netherlands tops the group with 16 points. The only match Dutch lost was against Nepal along with two wash outs. Nepal needs to win all its final four matches to entertain any thoughts of qualification for the ultimate qualifier. Nepal lost all four matches against PNG and Scotland, three of them in final over of the match. The matches against PNG were home games that were moved to UAE after CAN fail to prepare on time to host scheduled WCLC matches. Nepal losing to Kenya in home ground Kirtipur did not help either. Kenya has lost five and won five matches. They are sitting just above Nepal with ten points as main contender to challenge Nepal for final fourth spot as The Netherlands, PNG and Scotland are in very good positions to qualify.

ICC WCLC started way back in 15 May, 2015. A lot has changed since then. For example, Nepal cricket is on the verge of a complete ban if lingering issues back home does not get solved imminently. Now, not many would have thought it will come to this when Anil Mandal scored that beautiful century in Scotland and we failed agonizingly short of victory by two runs in our first WCLC match. Despite the fact devastating earthquakes hit Nepal only about a month ago.

The most glaring cons about marathon league format are it affects form and fitness of involved players. It is always difficult to expect same level of consistency and intensity playing matches in between long intervals. As mentioned above, in first match Anil Mandal scored century. It was one and complete answer to load of questions regarding Nepali batting woes. But not for long to be when he only could manage nine runs in next three WCLC matches including two ducks against PNG in UAE.  He was eventually dropped for Naresh Budhayer for home games against Namibia in April, 2016. Only four matches but nine months after Mandal scored his inspirational century. In normal circumstances scoring 109 runs in four matches in not a bad takeaway for an associate opener. Adding to that, a century in alien conditions for a Nepali batsman raised many hopes. Mandal was not dropped because he failed in three matches but he struggled inordinately for consistency after his Scottish feat for next nine months. Albeit it still counts as only three top level matches he failed. He got another chance in matches against Netherlands 14 months after his century. He failed to grasp hold of and last line was drawn on his selection for the time being.

Anil Mandal is not only curious case of the almost three years long WCLC. The keeping gloves have already changed hands more than countries we have faced in WCLC. It started with Mahesh Chhetri who along with Anil Mandal made triumphant returns to international team on back of strong domestic performances back in July, 2015. Those were last domestic one day competition held in Nepal by our Cricket Association. Chhetri failed to cement his place. It subsequently went to another comeback man Subash Khakurel later that year. He could not generate enough confidence with returns of a scratchy fifty in first match against PNG followed by a second ball duck in next match.

Nepal had enough time to ponder on different options as who would keep wickets for them before next WCLC match. The five months period between PNG (November, 2015) and Namibia (April, 2016) matches saw Nepal return to U19 cricket world cup after missing out on 2014.

It was rise of new era as Nepal defeated New Zealand and Ireland to qualify for Super League along with India in U19 World Cup form their group. Nepal went on to lose quarter-final against Bangladesh, fifth place play-off to Pakistan and seventh place playoff to Namibia. Nepal lost automatic spot on U19 Cricket World cup for next edition as they finished eighth. They are due to play qualifiers next month in Singapore. Still, finishing above the likes of test teams New Zealand, South Africa and Zimbabwe was an achievement that brought joy and provided options as future national players.

The consistent performers of the campaign Raju Rijal and Sandeep Lamichhane were rewarded with national call-up to face Namibia. Sunil Dhamala missed out but was under observation to be successor to always struggling opener’s slot. Raju Rijal was roped in to fill the wicket-keeping hole. Dipendra Singh Airee and Prem Tamang were announced reserve members of the squad. Nepal cricket looked rich in talent pool after quite a while. Amid all, Sandeep Lamichhane was the biggest find for Nepali cricket. The orthodox leg-spinner was compared to Shane Warne by ICC media for the turns he could generate on Bangladeshi pitches. He became a worldwide sensation. He was called by legendary Australian cricketer Michael Clarke for a season to horn his skills in Australian lower leagues. He since has been the regular feature as third spinner for national team. He is also the captain of our current U19 team. He is set to lead our junior team in upcoming U19 world cup qualifiers.

Raju Rijal struggled to carry his form from U19 cricket to senior colors. He was Nepal’s best batsman in U19 world cup held in February 2016. He played one match in April and two matches in August in same year. But the difference between those three matches was seven months. Precisely, five months between his first game for the country in Kirtipur to his second match in Netherlands against in-form Dutch bowlers, the leading side of the WCLC. He was axed for home matches against Kenya which were held seven months after the Netherlands tour.

The keeping gloves eventually went to Binod Bhandari. An utility player who came handy for the team as he was clearly struggling to make runs expected of him down the order and things were getting tougher  as a batsman only with exciting youngsters like Dipendra Airee knocking on the door.

Nepal’s WCLC journey started with Pradeep Airee struggling to hold his place in the playing XI in Scotland. That was the last we saw him in national colors. After nearly two years, 10 WCLC matches, one U19 World Cup his cousin Dipendra Airee is playing the match winning knocks for Nepal. Not only he played the sublime innings which pleased the attended crowd but he looked every bit of player that belongs to this level.  The nature of Airee’s innings drew comparisons to Paras Khadka.  He was batting at same position vacated by the skipper due to injury and in same fashion. It was blow for Nepal as their highest run getter missed the home games against Kenya as we failed to win first match. It was a major blow in all means after that scintillating hundred against Namibia in front of home crowd.  The stand in skipper Gyanendra Malla, Dipendra Airee and Nepal responded in best possible manner as they won the second match quite comprehensively. Malla carried his bat opening the batting and made sure they get the much needed victory in absence of their regular leader.

The three years of WCLC cycle not only gives new players to any team but also brings the old guards to foray. Con de Lange, former Cape Cobras player made debut for Scotland in wrong side of 30s. Netherlands weren’t far behind from improving themselves by adding a former South Africa international and veteran Roelof van der Merwe in their ranks. For Nepal it wasn’t any foreign recruitment but they simply rolled back the years in Mehboob Alam. He, once again, cemented his place in the eleven after years of out-casting. Nepal tried different pace bowlers in Avinash Karn and Karan KC to partner Sompal Kami in overseas conditions with no to little success. Mehboob Alam is not first choice pacer for any Nepal squad given his fitness and age. He defied that by his late bloom. He picked up two wickets upfront and bowled five maiden in seven overs he bowled in second match against Kenya setting up the match for Nepal. He was unplayable. He was picked and dropped after PNG matches and was not used as a bowler against Kenya in first match. He finally got the opportunity and grasped it with both hands.

Nepal needs all eight points possible to qualify. Scotland, PNG, HK & Kenya are set to play with each other which only increase Nepal’s chances of qualifying. This makes matches against Hong Kong critical. If this was UEFA Champions League, Nepal’s round of 16 starts now. Nepal needs to win both matches against a fragile Hong Kong. The availability of WCLC’s best batsman Anshuman Rath is unsure as of now. They still have WCLC’s best bowler in Nadeem Ahmed and a rejuvenated skipper-allrounder in Tanvir Afzal.  The last two matches against UAE might take place in UAE or Kirtipur which again puts us in commanding position. We have good records in either venue. UAE, currently lying in bottom of the table, has only won two matches from ten completed matches.

After three years and ten matches, Nepal has seen it all. It was like a mini career mode save in any sports game. We saw baton been passed from Mandal to Dhamala as our search for opener continues.  A wonder-kid discovered in Sandeep Lamichhane to carry the spin legacy soon to be vacated by most iconic spin duo of associate circuit in Basant Regmi and Shakti Gauchan. We now have Dipendra Airee touted as next Paras Khadka laced with similar set of skills. A talented lad Saurav Khanal is already waiting in the wings to feature in remaining WCLC matches. A must win round of matches remain between Nepal and global world cup qualifiers.