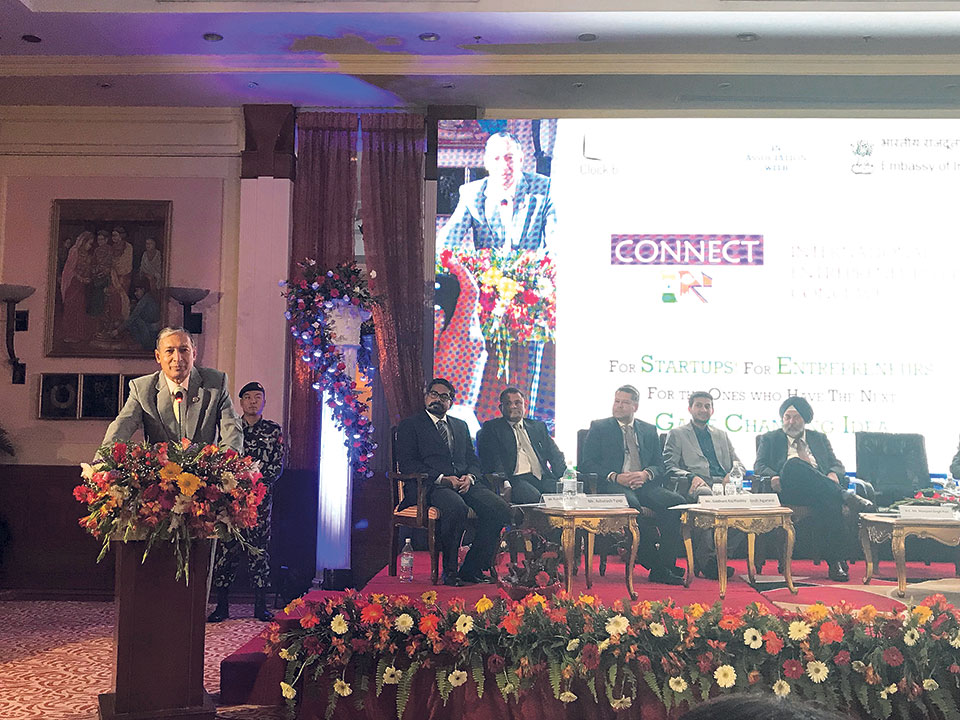 KATHMANDU, March 25: With the goal to connect young minds of Nepal and India, the Embassy of India in collaboration with Clock b Business Innovations organized an international entrepreneurship conclave, Connect-IN, in Kathmandu on Saturday. Over 300 youth entrepreneurs from Nepal and India attended the conclave.

Inaugurating the conclave, Minister for Finance Yuba Raj Khatiwada said that youth entrepreneurship was crucial for the development of a country.

“Youth play a vital role in the nation’s development and it is them who can change the world. So it is crucial to promote youth entrepreneurship,” Khatiwada said.

He stated that the government was taking necessary steps to initiate an online system of company registration to ease the process of registering entrepreneurial ventures.

He also emphasized on the importance of conventions such as these, as such events not only allowed young entrepreneurs to build networks across regions, but also discuss on the issues that need to be addressed by the government.

Speaking with Republica, Manjeev Singh Puri, Ambassador of India to Nepal, stated: “Nepal and India are two nations with a large youth population. They have many ideas and innovations that can be put to good use. As both Nepal and India are similar in a number of different ways, and perhaps many Indian companies have extended their goods and services internationally with the first country being Nepal, Nepali entrepreneurs can do the same in India.”

Stressing on the governments’ role to keep its talents intact, he said: “Although one might think that promoting entrepreneurship in the nation might help decrease brain drain, and although it is possible to some extent with the proper investing and business environment, it is up to the people where they choose to live and work. Thus it is important for the government to help create a favorable environment for this reason.”

The event was adored by felicitations from successful entrepreneurs and CEOs of different companies from Nepal and India, including the famous Indian entrepreneur Ritesh Agrawal, the CEO of OYO Rooms, a hospitality venture that has recently started its services in Nepal.

During the discussion, Editor of Republica Daily Subhash Ghimire stated: “While we are usually told that the media gives more emphasis to negative aspects of the community such as corruption, we are also eager to share the success stories of young minds, which are sometimes so influential that they get featured as the main story for the day.”

“We must also focus on developing the infrastructure of Nepal so that products from areas of Nepal that are currently inaccessible via road can hit the market,” Ghimire added.

Ventures such as Kullabs.com, Furniture Hub, ‘Fohar Bata Mohar’, Metro Tarkari, and My Earth Eco-friendly Bags had an opportunity to pitch their ideas among the investors at the end of the day.

KATHMANDU, March 24: International Entrepreneurship Conclave Connect-IN, being organized by the Embassy of India in association with Clock b Business Innovations,... Read More...

KATHMANDU, Oct 28: Metropolitan Police Crime Division, Teku on Tuesday arrested an Indian who had been living in Nepal since the... Read More...