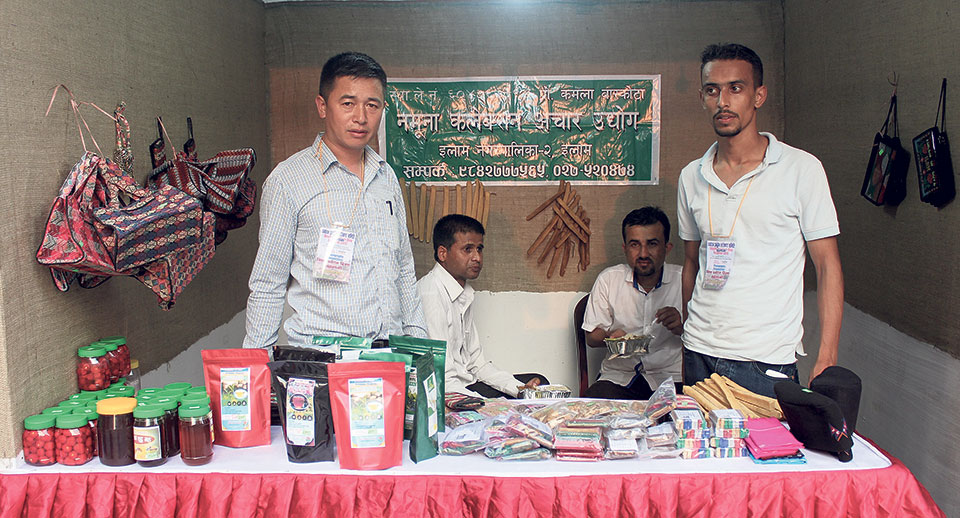 Local products of Ilam being showcased at an exhibition in Indian city of Siliguri, organized on September 22-24, on the occasion of World Tourism Day which is celebrated throughout the world on September 27.

At the initiation of Ilam Hotel Association and Mechi Hill Area Tourism Promotion Development Committee, the entrepreneurs have initiated the promotional activities for both Nepal and India.
As a starting point of this initiative, stakeholders from both the countries have jointly celebrated ‘World Tourism Day’ in Siliguri, India.

A Nepali team of 22 members has reached Siliguri, along with the executive director of the committee Kesav Dharauli, president of Ilam Hotel Association Devi Poudel, senior vice-president of Ilam Chamber of Commerce and Industry Ishwor Chipalu, and other stakeholders.

In celebration of the tourism day, an exhibition of local production is organized in Siliguri from September 22-24. The Nepali products in display include organic tea, cardamom, lollypop (Nepali chocolate), dhaka clothes, and red chilly.

“We have expected to earn more than Rs 300,000 from this exhibition,” said Sushil Ghimire from Pathibhara tea shop of Ilam.

According to the Nepali entrepreneurs, visitors coming from West Bengal and south India have shown their interest on the local products of Nepal. One of the entrepreneurs, Suman Rai, said that visitors were more attracted toward agricultural product of Mechi hill of Nepal in comparison to the products from India’s Darjeeling, Sikkim, Mirik and Siliguri areas.

“Other stalls have medicines, foods, herbs and similar other items,” he said, “We are the only one to keep the stalls of agricultural products.” Likewise, Nepali products such as topi, dhaka-bags, Bhadgaule topi are popular among the visitors.

The months from September to March, except December, are considered as tourist season for Mechi hill, Darjeeling, Mirik and Sikkim. So to take the advantage of this season, stakeholders from both the countries have came together to promote their tourism industry. The Nepali entrepreneurs have targeted to bring tourist in Nepal who visit Darjeeling and Mirik every year. Nepali cultural dance is also presented during the exhibition.

According to the statistics of tourism information center based in Kalebung, every year 60,000 Indian tourists visit Ilam. Especially the tourists from West Bengal choose to visit Ilam, Paachthar and Taplejung districts of Nepal. However the Gorkhaland movement in Darjeeling has affected the flow of Indian tourists this year, said Dhaurali.

“Since the tourists did not visit Darjeeling due to Gorkhaland movement, the number of tourists visiting Taplejung, Ilam and Pachhthar also been affected,” Dhaurali added.

KATHMANDU, July 31: The government has opened more than 400 peaks for climbing. However, many of them have not been explored... Read More...