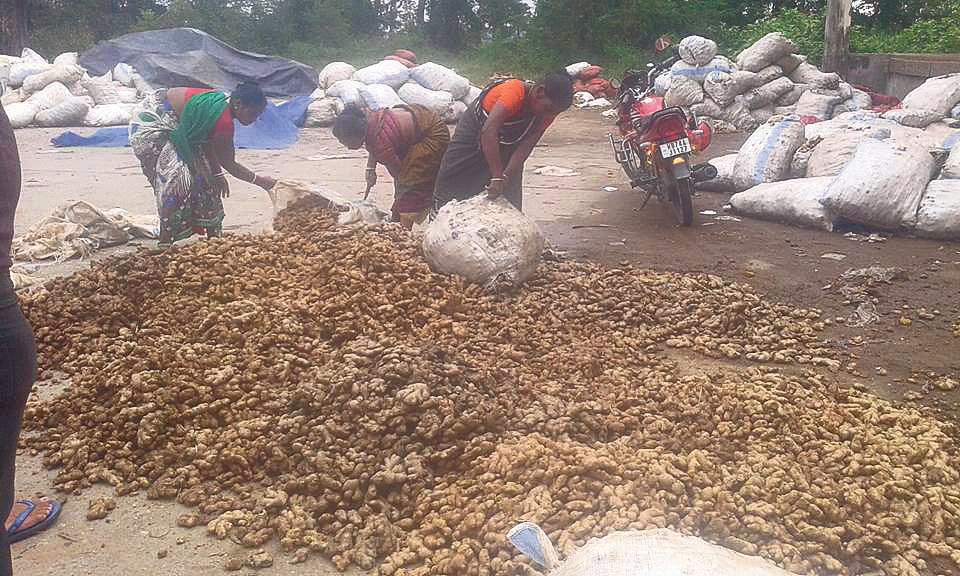 Traders separate decayed gingers from fresh ones at the Kakarbhitta border point in eastern Nepal. Due to a long wait at the border, ginger has started to rot. (Republica file photo)

JHAPA, Oct 17: After India implemented Goods and Service Tax (GST) from the first of July this year, illegal trade across the border was expected to be controlled and formal import-export was believed to become easier. But to the contrary, bilateral business between Nepal and India is facing more difficulties.

Following the implementation of GST, attempts to tax evasion have increased, resulting in the reduction of customs revenue of the country. The burdensome regulations have ruined the export of Nepali ginger.

Import from major borders is declining and import from the illegal channels is increasing. This has directly affected ginger export from Nepal after Dashain.

Dozens of truck carrying ginger are stranded at the border. The ginger inside them has already started to decay. Before Dashain, Nepali traders were exporting ginger in the Indian market paying five percent GST but after Dashain, ginger export has stopped completely.

“Earlier there was no tax on ginger produced in Nepal but after July 1, we have to pay GST,” Shyam Subba, a ginger exporter at Kakarbhitta, said. “And we have been paying five percent tax on ginger but after Dashain, the Indian traders are not ready to accept ginger with increased rate. Earlier exporters didn’t have to pay tax on fresh ginger.

“As we have to pay five percent GST on ginger, we added that amount on the price, that’s why the Indian traders have denied buying ginger from us, saying that it’s expensive,” Subba said.

According to him Nepali traders have huge quantities of ginger in stock. Now they are in a dilemma since the ginger season is coming soon. Gaurav Chaudhary, a local ginger trader, said that ginger worth more than Rs 5 million is decaying at the Mechi custom area.

“Ginger is decaying. Traders are compelled to make losses worth Rs 200,000 to Rs 250,000 every day,” Chaudhary said: “Traders fear that they might lose the international market for ginger in the name of GST.”

Traders have accused the government for not taking any initiation on this issue. “Our government must talk with the Indian government to release us from this dilemma,” a trader said: “But the government is just being mute spectator.”

India is the only international market for Nepali ginger. Almost 80 percent of the total ginger production of Nepal goes to India. Nepali traders have been demanding removal of GST on fresh ginger while the Indian authorities have been saying that legally prohibited goods are not allowed to be imported in the country.

KATHMANDU, Jan 20: Nepal Tarun Dal has said its attention was drawn towards the act of encroaching of the Nepali... Read More...

UNITED ARAB EMIRATES (UAE), Nov 25: As many as 14 Nepali migrant workers have been stranded in the UAE after... Read More...

How safe are pubs and restaurants?
13 hours ago

Can the pandemic inspire growth of robotics and automation in Nepal?
14 hours ago

One arrested on charge of human trafficking
8 hours ago