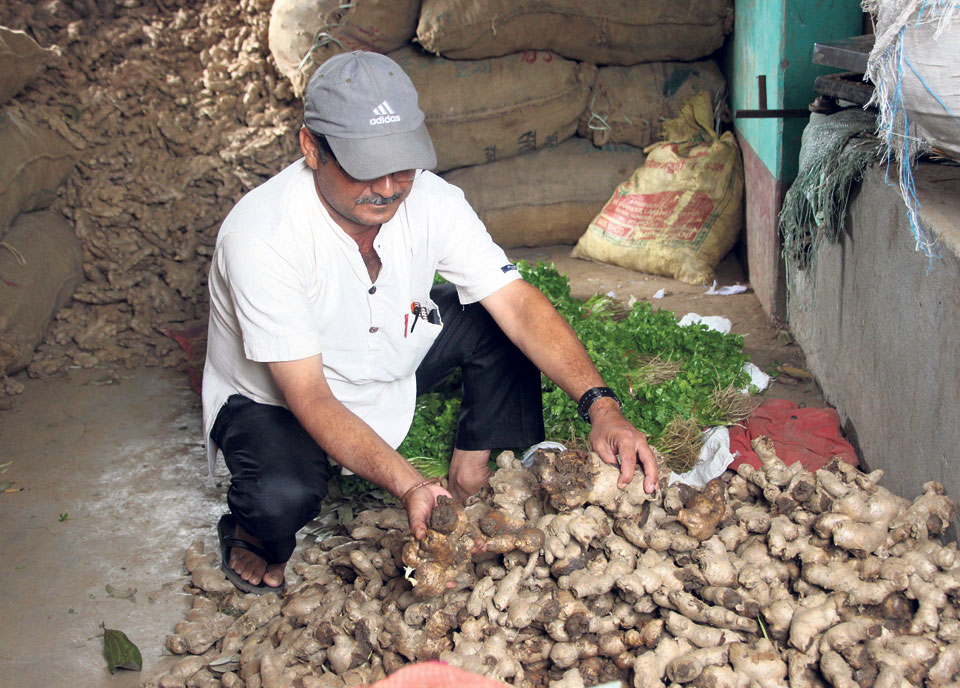 JHAPA, July 24: Export of Nepali ginger to India is in jeopardy following the imposition of Goods and Services Tax (GST) by India and indifference by Nepal government to take up the issue with India.

After the imposition of tax, the traders have to pay at least Rs 10,000 to Rs 15,000 to pass one truck of ginger through the costume check-point. They did not have to pay the money until a month ago.

Export has been halted since the past month, and as a result, ginger has been stockpiled with Nepali traders and farmers.

“Indian traders are not willing to increase the price,” Nepali exporter Bishnu Rai said, “We are making losses now. We don't know how to send ginger to India in such situation.”

Indian traders have no choice than to buy ginger from Nepal, but still they are unrelenting. They know that Nepali traders too have no choice other than to sell it to them.

Under the GST no tax is required for 'fresh ginger', and the Nepali farmers say the ginger they are exporting to India is 'fresh ginger' as it is sent directly from the farm to the exporter.

“How can it be only 'ginger' and not 'fresh ginger' as soon as GST was imposed?” said Hareram, officer at the Panitanki customs point in Jhapa. “This is a matter to be solved by the government, we cannot do it at our level.”

“Nepal Ginger Producers and Traders Association has been demanding action from the concerned sides. But both the Nepali government and the Federation of Nepalese Chambers of Commerce and Industry have taken no action yet,” he said.

“We cannot pay tax for ginger and sell it for cheap”, Indra Bahadur Budhathoki, general manager of the association said, “The government should help create a way to market. This is a matter concerning many farmers, traders and exporters.”

Budhathoki, who had discussions with Indian traders for whole day on Sunday said, “If the situation goes on like this, either we have to leave our produce to decay in the fields or sell it at loss.”

Ginger is one of the major agriculture products to be exported from Nepal. Almost 80 percent of export of ginger, cardamom and tea is made to India. Four districts along the eastern border of Nepal -- Taplejung, Paanchthar, Ilam and Jhapa -- produce around 60,000 tons of ginger every year.

Rabi Shankar Saiju, spokesperson at the Ministry of Commerce said, “Nepali traders have no alternative to paying tax,” he said, “Taxes are same for both Nepali and Indian products.”

However, he did not give a clear answer when asked if the government could do anything about it, but said: “There have been some efforts, let's see.”

KATHMANDU, July 12: The wholesale price of ginger has gone down in the Nepali market as its supply has swollen due... Read More...

Election of 110 PR candidates: Who are on the list of seven nationally recognized parties?
29 minutes ago