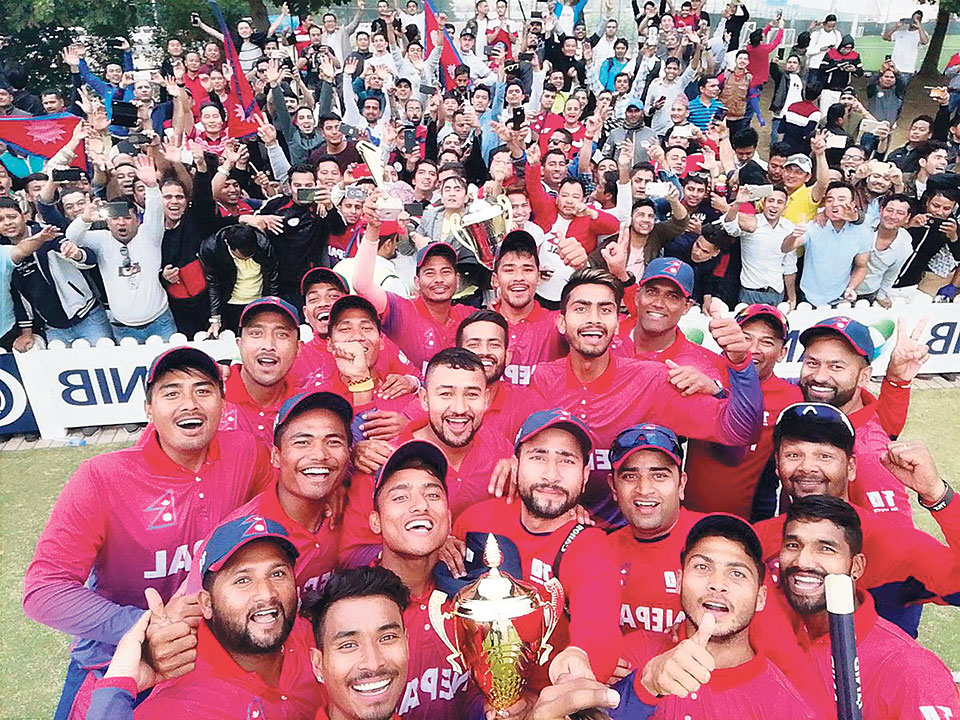 Members of the Nepali national cricket team pose for a group photo after defeating the United Arab Emirates to claim the T20I series title in Dubai, the UAE on Sunday. Photo Courtesy: Raman Shiwakoti

Last week, Nepal had won the One-Day International (ODI) series against the same opponent. With the latest victory, Nepal has completed a historic clean sweep against the UAE, winning both the series in its first-ever full-fledged bilateral series tour.

Sunday’s match was delayed due to rain and was shortened to 10-over per side after the match started two hours later than the schedule.

The UAE won the toss and invited Nepal to bat first in the conditions helpful for bowlers. The visiting team put up a total of 104 runs for the loss of 8 wickets with crucial contributions of 29 runs from skipper Paras Khadka, 28 runs from youngster Sandeep Jora and 21 from wicket-keeper Binod Bhandari.

Player of the match Karan KC, player of the series Avinash Bohora and Lalit Narayan Rajbanshi shared two wickets each in Nepal’s 14-run victory. Sandeep Lamichhane and Sompal Kami supported with one wicket each to help Nepal limit the UAE to 90 runs for the loss of eight wickets at the end of 10 overs to the delight of thousands of Nepali fans residing in the Gulf nation.

Skipper Khadka was ecstatic for having a memorable period in Nepal’s cricket since a couple of weeks after earning the ODI status.

“Amazing two weeks of cricket. Very proud of the effort everyone has put in. Hope to continue this ahead as well. Thank you everyone for the love and blessings,” tweeted Khadka after the T20I series win.

Nepal had also won the ODI series 2-1 in similar fashion as the T20I series --losing the first match and coming back to win the remaining two matches to complete the series win.

Nepal had drawn its first ever ODI bilateral series against the Netherlands last year in August. Similarly, Nepal had lost its last T20I series 3-1 against the same European team in Amsterdam in 2015 whereas it had lost the first T20I series 1-0 against Hong Kong in 2014.

Beautiful Helambu awaiting to be explored (with photos)
12 hours ago