Members of Nepal national cricket team pose with their international trophies after defeating the United Arab Emirates to claim the T20I series trophy in Dubai, the UAE on Sunday. The team had earlier won the ODI series as well. Photo Courtesy: Raman Shiwakoti

Nepal had won the One-Day International (ODI) series last week to complete a historical clean-sweep winning both the series in its first-ever full-fledged bilateral series tour.

The match was delayed due to rain and was shortened to 10-over each side match after the match resumed two hours later from the official start time. The UAE won the toss and invited Nepal to bat first in the conditions helpful for bowlers.

The visiting team put up a total of 104 runs for the loss of 8 wickets after starting poorly. It conceded a wicket-maiden against the UAE skipper Mohammad Naveed who dismissed Pawan Sarraf for a 4-ball duck.

However, Nepal immediately made amends to the start as Skipper Paras Khadka struck 29 runs in 14 balls recouping the losses after a poor batting.

Likewise, Sundeep Jora, who recently became the youngest batsman to score T20I 50 on debut in the series opener against UAE hammered three towering sixes taking his run-tally to 28 runs in just 11 balls before he was bowled in the 7th over. Wicket-keeper-batsman Binod Bhandari, who replaced Pradeep Airee in the playing XI, made crucial contribution of 21 runs from 13 deliveries that included two fours and a six. Naveed and Amir Hayat shared two wickets each, supported by Zahoor Khan, Sultan Ahmed and Mohammad Boota’s a wicket each.

In reply, the UAE was limited to 90 runs in its 10 overs which saw a disciplined bowling from player-of-the-match Karan KC, player-of-the-series Avinash Bohora, and Lalit Narayan Rajbanshi sharing two wickets each supported by Sandeep Lamichhane and Sompal Kami’s a wicket each. Lamichanne and Nepal had conceded 20 runs in the first over of the second innings but the spin-sensation made a triumphant comeback conceding three runs and picking up the wicket of Mohammad Usman in his second over. Nepal celebrated a 14-run win amidst thousands of fans of Nepal cricket team at the ground, who either traveled to the UAE or were residing there.

Skipper Khadka was ecstatic for having a great couple of weeks in Nepal’s cricket since earning the ODI status. “Amazing two weeks of cricket. Very proud of the effort everyone has put in. Hope to continue this ahead as well. Thank you everyone for the love and blessings,” tweeted Khadka after the T20I series win.

Jora scored most runs for Nepal in the series with 82 runs which included a world-record half-century for being the youngest to do so in the first T20I match. Similarly, right-arm pace bowler Bohora picked up six wickets, the most in the series.

Nepal had also won the ODI series 2-1 in a similar fashion -- losing the first match of the series and coming back to win remaining two to complete the series win. Nepal had drawn its first ever ODI bilateral series against the Netherlands last year in August. Similarly, Nepal had lost its last T20I series 3-1 against the same European team in Amsterdam in 2015, and lost the first T20I series 1-0 against Hong Kong in 2014.

Nepal won the Twenty-20 International series 2-1 after handing over a 14-run defeat to the UAE in the series decider at the ICC Academy in Dubai on Sunday. 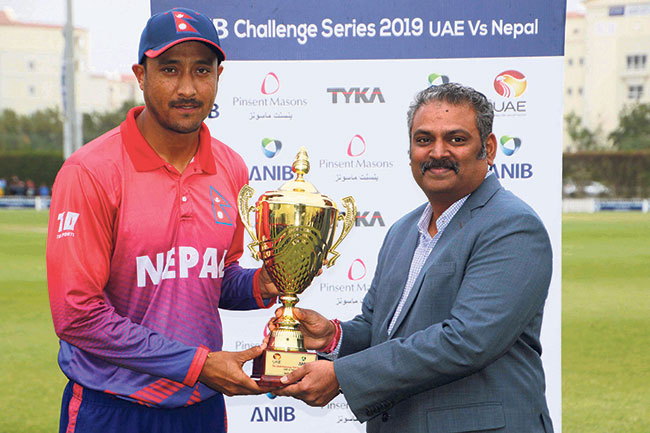 Captain Paras Khadka is handed over the T20I series trophy after the third match against the UAE in Dubai, the UAE on Sunday. 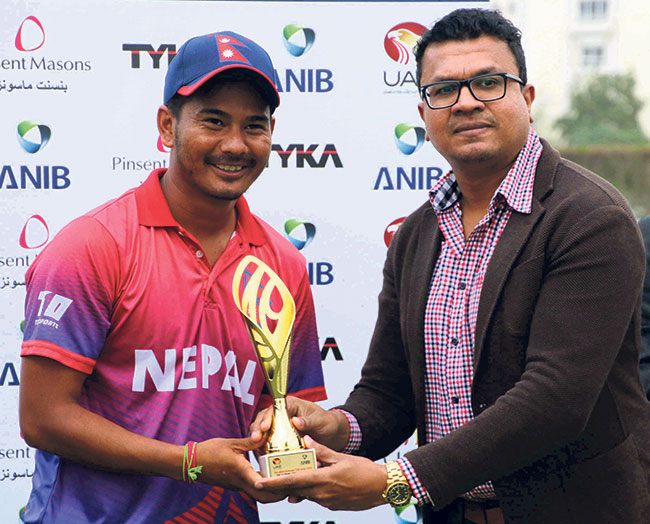 Avinash Bohora is handed over the player of the series trophy. 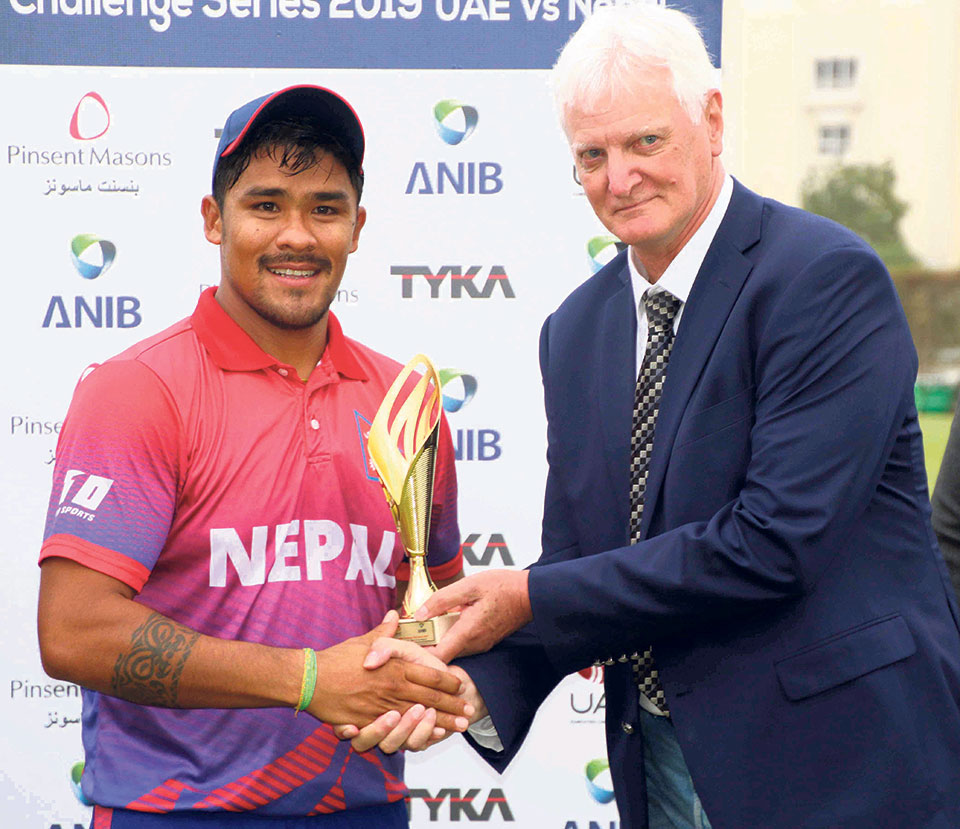 Karan KC is handed over the player of the match trophy.