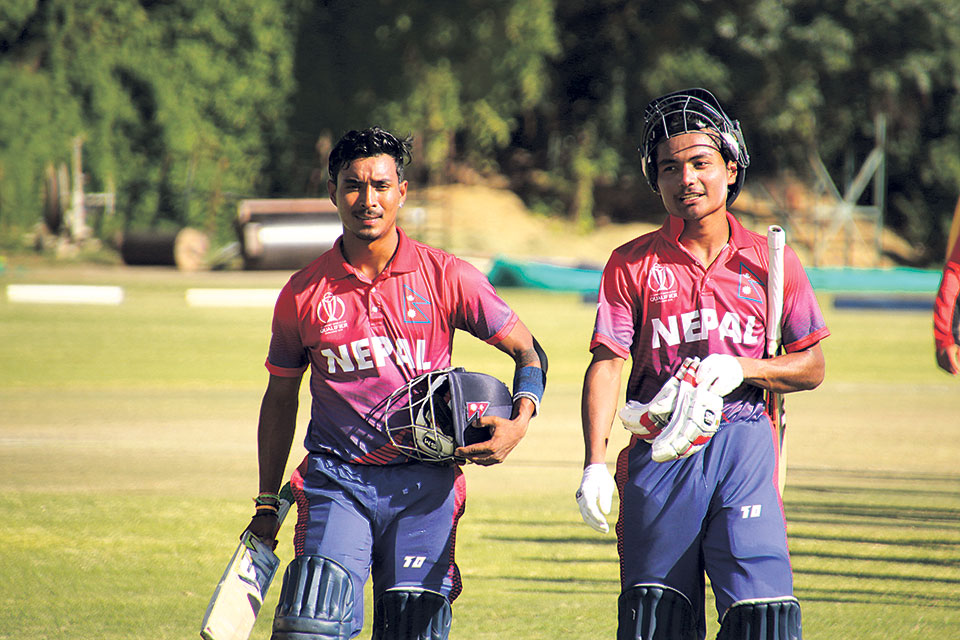 KATHMANDU, March 13: An unbeaten partnership of 89 runs between Rohit Paudel and Sompal Kami has delivered Nepal’s first win of the ICC Cricket World Cup Qualifier by five wickets in Bulawayo Athletic Club, Zimbabwe on Monday. Player-of-the-match Rohit displayed immense maturity on his way to score unbeaten 48 runs, aptly supported by Sompal’s fluent 37 runs including five boundaries each. The team lost five wickets for 25 runs at one stage. But the duo’s partnership pacified the enduring chase, helping Nepal seal the win in 40.4 overs.

This was Nepal’s first win the tournament, with which the team has tied points with Hong Kong and Afghanistan. Hong Kong’s hope for qualifying for the Super Six was tarnished by the rear-guard action by Rohit and Sompal.

On the other hand, Afghanistan went to the next round. Afghanistan will not carry any points as the points they earned against Nepal will not be counted in top-six stage. Meanwhile, Nepal will face the cross-over playoff against the bottom ranked team of Group A, Papua New Guinea, which can potentially seal an ODI status for Nepal. However, if Hong Kong wins its cross-over match against the fourth-placed Netherlands in Group A, Nepal will again have to beat Hong Kong in playoff match for ODI status.

Nepal made a brisk start reaching 41 runs at the end of nine overs without losing any wickets chasing the target of 154 runs within 45 overs to secure Nepal’s position above Hong Kong in the Group B points table. Anil Sah made 26 runs from 36 deliveries including five fours meanwhile in a lean patch Gyanendra Malla made 12 runs from 31 deliveries.  Hong Kong seamer Aizaz Khan removed both batsmen, following which Nepali batting started to collapse.

Nepal lost five wickets adding 25 runs in total. They were reduced for 66 for five wickets at the end of 20 overs with Tanvir Afzal picking up the most crucial wickets of Paras Khadka for 11 runs. Khadka faced 14 deliveries before getting clean-bowled by Afzal delivery to provide a huge dent in Nepal’s chasing aspirations. Off-spinner Ehsan Khan’s twin strikes removed Dipendra Singh Airee and Aarif Sheikh to leave Nepal in an early trouble.

In a must-win contest for both sides with qualification chances depending in the result, Hong Kong won the toss and elected to bat first against Nepal in Bulawayo Athletic Club, Zimbabwe on Monday. Hong Kong opener Nizakat Khan scored 47 runs but wickets kept falling at the other end. Nizakat was sixth wicket of the day at the score of 106 runs caught by Nepali skipper Khadka off Lalit Rajbanshi delivery.

Christopher Carter, who replaced Aizaz Khan at the top of the order, was the first man to lose his off-stump to Basant Regmi delivery. Sompal Kami then dismissed Hong Kong skipper Babar Hayat for 20 runs including three fours and a six. The big wicket came when Nepal’s teen sensation Sandeep Lamichhane drew in-form left-handed batsman Anshuman Rath out of his crease and stumped out by wicket-keeper Anil Sah. Rath could contribute only a run in the match.

The wickets kept tumbling for Hong Kong as they were reduced to 110 runs for the loss of eight wickets in 34.3 overs. Lamichhane had completed his bowling quota picking up his first 3-wicket-haul of the tournament so far, conceding 17 runs in his 10 overs including four maiden overs. The same number of maidens was delivered by Basant Regmi who picked up two wickets conceding 20 runs in 10 overs. Sompal Kami and Lalit Rajbanshi registered one wicket each.

However, a late partnership of 32 runs for the ninth wicket pulled things back for Hong Kong taking their total to 153 runs before getting all out in 48.3 overs. Ehsan Khan scored 21 runs batting at number nine, supported by Ehsan Nawaz who made 13 runs. Both batsmen were dismissed by Karan KC who ended up with two wickets in the match from his 8.2 overs, conceding 35 runs. Nepal needed 154 runs to win within 45 overs to upstage Hong Kong net run-rate and finish above them in the Group B points table.

In the other match of Group B, Zimbabwe and Scotland played out an exciting tied match where both teams scored 210 runs each. Scottish pacer Safyaan Sharif bagged the player-of-the-match award for his maiden 5-wicket-haul. Both teams have already advanced to the Super Six along with Afghanistan after the Nepal win. In Group A, the United Arab Emirates went down to a humiliating loss of 226 runs chasing the target of 314 runs posted by Ireland. Irish opening batsman Paul Stirling was adjudged the player-of-the-match for his 126 runs. 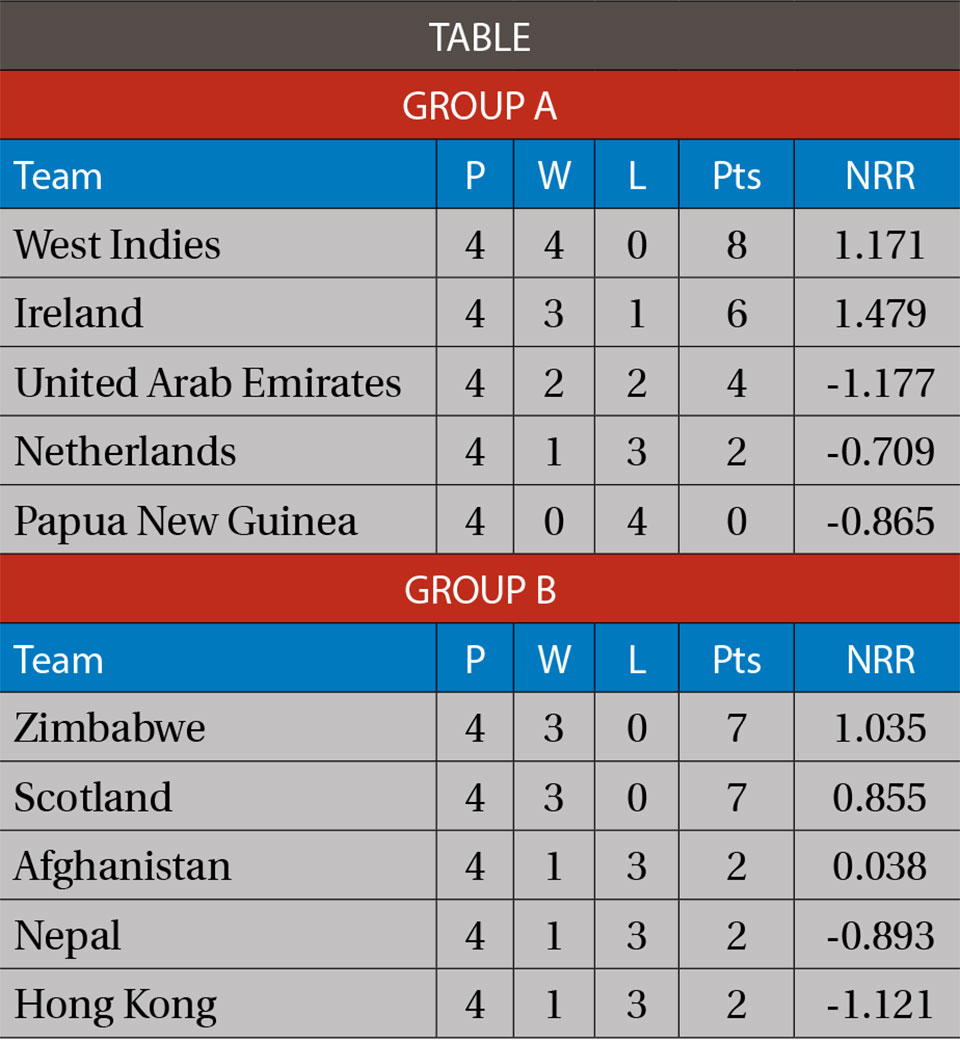