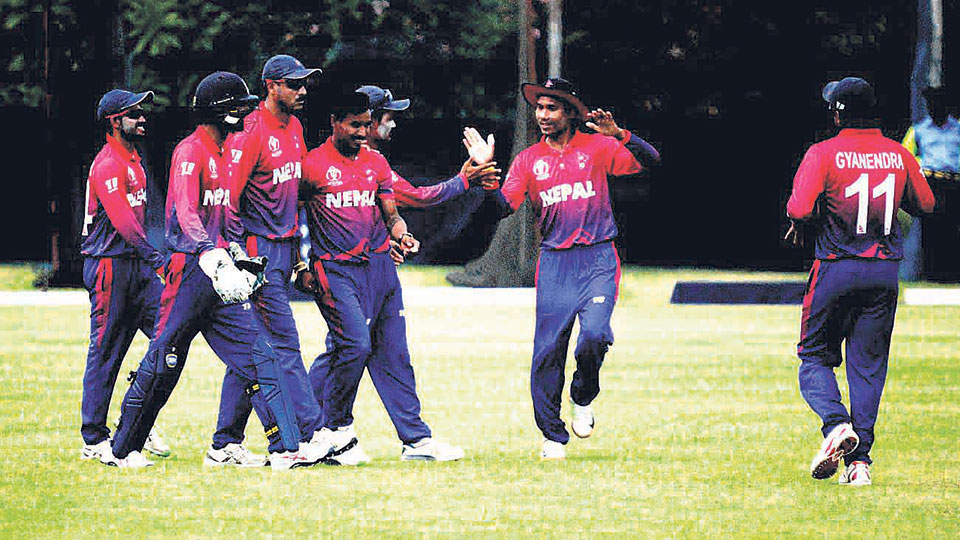 KATHMANDU, March 15: It boils down to the Nepal versus Papua New Guinea (PNG) match in the ongoing ICC Cricket World Cup Qualifiers (ICC CWCQ) for the much coveted One Day International (ODI) status after both teams missing out on Super Sixes during the group stage. The cross-over playoff match between Group B fourth placed Nepal and Group A fifth placed PNG will decide the fate of the two associate nations at the Old Hararians Sports Club in Zimbabwe on Thursday.

The ODI status is there for taking for the top three associates nations of the Qualifiers. Zimbabwe, Afghanistan, West Indies and Ireland are Test nations; similarly, the Netherlands earned the ODI status after winning the ICC World Cricket League Championship (WCLC) earlier this year. With Scotland and the UAE already qualified for the Super Sixes from their respective groups, one spot is up for grab for the next four-year cycle with Nepal, PNG and Hong Kong vying for the ODI status. Nepal will face PNG and Hong Kong will clash with the Netherlands in virtual semifinal playoffs for the seventh place finish.

If Nepal loses the match against PNG, it will drop down to Division Two and re-start the next World Cup qualifier cycle from the second division.

PNG lost all their matches in Group A whereas Nepal tipped Hong Kong in last group match to finish fourth after losing its first three matches.

FORM
Nepal lost all three previous group matches against Zimbabwe, Scotland and Afghanistan before registering their first win against Hong Kong in the final group match on back of Rohit Kumar Paudel and Sompal Kami’s 89* runs partnership for sixth wicket following another batting collapse. Nepal’s batting has hugely depended on skipper Paras Khadka’s exploits at number three. Khadka was included in the all-star Playing XI of the Group Stage. Nepal’s bowling clicked in the match against Hong Kong after being in mix form against the better prepared opponents in previous games.

PNG finished at the bottom of Group A. It was in with a chance against Ireland in a four-wicket loss on back of Tony Ura’s herculean effort of 151, the second highest individual score of the tournament so far. PNG hopes will rest on in-form Ura in batting whereas bowling will be led by experienced Norman Vanua, who picked eight wickets in four matches, and Alei Nao six in the same number of matches.

PLAYERS
PNG’s best hopes to post or chase a good total remains with Ura’s performance. He will be a key player for PNG to deal with Nepal spinners.

The return of form for young leg-spin sensation Sandeep Lamichhane picking up three wickets against Hong Kong will be an added advantage given PNG facing him for the first time. Given his track record to run through the susceptible batting lineups, he could land Nepal an ODI status.

PROSPECT
Nepal lost both the previous matches against PNG in ICC WCLC back in 2016 in the UAE. Back then, Irshad Ahmed, the canny off-spinner was Nepal’s third spinner in the team led by veteran duo of Basant Regmi and Shakti Gauchan. Sagar Pun and Binod Bhandari were part of the setup too. Things changed drastically for Nepal by the end of WCLC and start of WCL Division Two last month. The youngsters Rohit Kumar Paudel and Sandeep Lamichhane have brought calmness and consistency to Nepal performances compared to past years. They would like to continue it against the opponents of similar stature.

Nepal and PNG are struggling to put up consistent performances with bat. Barring Paras Khadka and Tony Ura for their respective teams, none of the top-order batsmen has made any significant contribution. Both teams will heavily depend on either batsman to get a good total on board. The Old Hararians surface has been helpful to batsmen and more of the same is expected for the playoff that will decide the fate of each team for next four years.

With rain a possibility, and most of the matches being affected by it in Harare, teams will look to chase if they win the toss. The sun is expected to shine for most part but clouds are expected late in the afternoon. In the worst case, if the match does wash away, Nepal will get the benefit of status for having two points in compared to PNG’s zero.