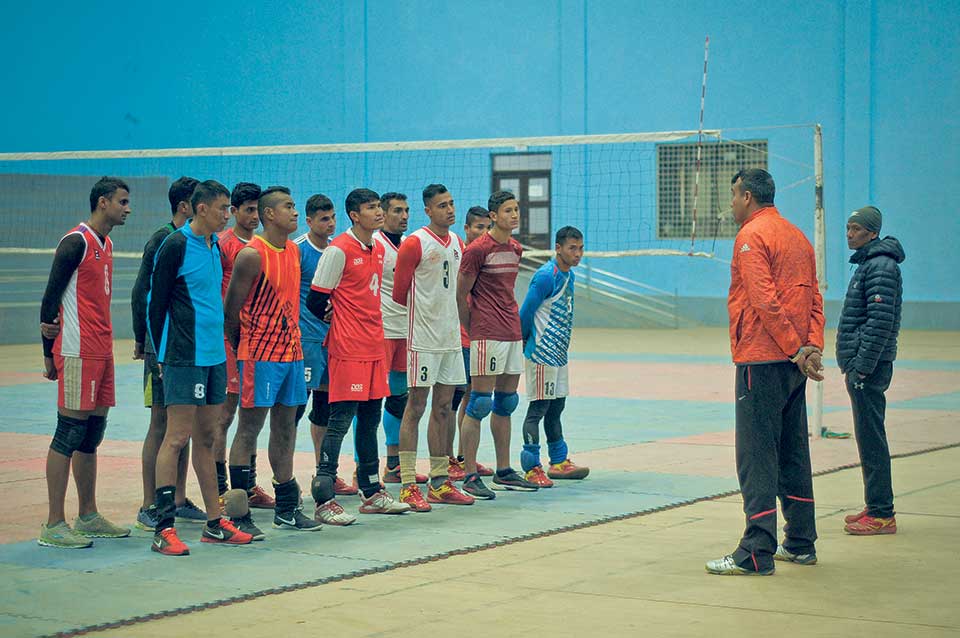 The Nepal government recognized volleyball—which is played in almost all parts of the country—as the national game of Nepal on May last year. After the national recognition, volleyball, which was left in shadow in the past several years, is gaining popularity in Nepal again.

The recent sponsorship agreement inked between Nepal Volleyball Association (NVA) and private sector organizations including Federation of Nepalese Chambers of Commerce and Industry (FNCCI) is a positive development toward promoting the sport in Nepal.

Not only is support coming from within the country, but also helping hands from outside the country have started coming forward to uplift Nepali volleyball.

Nepal will travel to Hong Kong to play two friendly matches on January 28 and 29. The first match is scheduled at the Yuen Chau Ko Sports Center, while the second match will be held at the Po Wing Road Sports Center. After that, the Nepali team will head to Macau to play against the Macau national volley team on January 31.

The national team has been preparing for these matches from over a month.

“We have prepared well for the matches within a short time,’’ said Em Rana Magar, captain of men’s national volleyball team. “We have been playing together for a long period time, so the coordination among all the players is very good. Our confidence has been boosted by the results of recent matches.’’

“We have corrected our errors seen in the previous matches. We were weak in the receiving part, but we have improved it. We have been focusing on receiving and blocking lately. We have mostly been good in spiking,’’ said Magar, who seemed confident in defeating Hong Kong and Macau.

“We will play to win. We will beat Macau and we are capable of defeating Hong Kong as well,” he added.

Nepal had pulled off mixed results when it last played against Hong Kong in Japan. In the first match played in Sagamihara, Nepal saw off Hong Kong 3-2, while it lost 3-1 in the second.

“We are playing against Hong Kong after over three decades. Our ranking isn’t good because we haven’t participated in the tournaments organized by Asian and FIVB, but we are at the level of Hong Kong team,” Bhatta said, “We can beat Macau and we are confident of defeating Hong Kong as well. If not the win, we will present a tough fight to Hong Kong.”

According to the rankings unveiled by the International Volleyball Association (IVA) in July, Hong Kong lies in the 78th place, while Macau is in the 137th.

According to Bhatta, the Nepali team, who has experienced setters in the team, will prepare tactics according to their opponents’ tactics.

Niranjan Gurung and Jay Narayan Chaudhary, Nepali volleyball lovers residing in Hong Kong, played instrumental roles in making the Nepal-Hong Kong fixture possible after so many years. Gurung is a former volleyball player of Nepal. The volleyball team will be welcomed on January 27 by Gurung, Chaudhary and other Nepalis living in Hong Kong.

Bhatta informed that the friendly matches with Macau and Hong Kong will be taken as the preparations for the upcoming South Asian Games (SAG) and AVC Central Open Volleyball Tournament.

“We are thinking of participating in the Asian Championship. The matches will help in the preparations of SAG and Central Zone games,’’ Bhatta added.