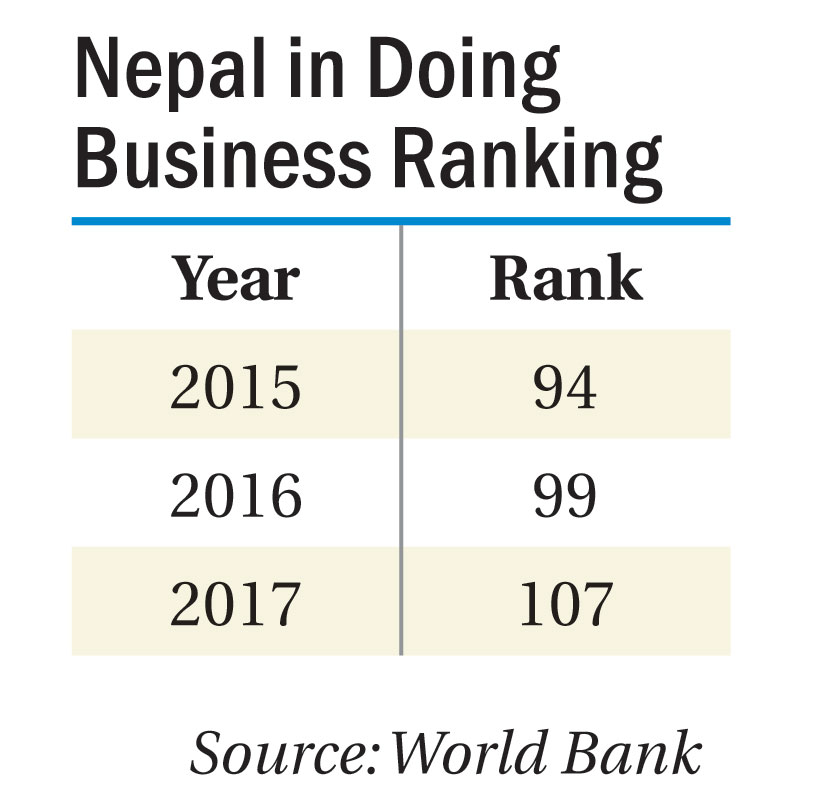 KATHMANDU, Oct 26: The doing business environment in Nepal has been deteriorating continuously in recent years, according to a global report.

“The main reasons behind the drop are a decline in Nepal’s business regulatory environment and data revisions,” the report states.

Nonetheless, Nepal ranks second highest in South Asia after Bhutan (73) and ahead of Sri Lanka (110).

On the distance to frontier metric, Nepal’s score went down from 59.36 in Doing Business 2016 to 58.88 in Doing Business 2017, using a comparable methodology. “It indicates a widening gap between Nepal’s regulatory environment and global best practices,” the report noted, adding: “More specifically, Doing Business finds Nepal made dealing with construction permits more difficult by increasing the cost of obtaining a building permit in 2015/16.”

However, on the positive side, Nepal also made exporting and importing easier by implementing ASYCUDA World, an electronic data interchange system, according to the report.

Nepal has recently made progress in institutional reforms on several fronts that will take some time to be reflected in international rankings, the global report notes. “For example, the government has commissioned a Cloud Infrastructure, introduced Public Key Infrastructure for Digital Signature and is close to launching an online registration and approval system for Foreign Direct Investment,” says Takuya Kamata, the World Bank’s Country Manager for Nepal. “Wider public uptake of these systems can help ensure that these positive developments are captured in future rankings,” he added.

Nepal’s drop in ranking was also partially offset by changes in methodology. For the first time, the report includes a gender dimension in three sets of indicators: Starting a Business, Registering Property and Enforcing Contracts. The Paying Taxes indicator set has been expanded to cover post-filing processes, such as tax audits and VAT refund.

Nepal records 2,421 new cases, 3,558 recoveries and 81 deaths on Wednesday
19 hours ago
As a Dalit girl is denied a room to rent, an int’l report highlights poor representation of Dalits in  state’s judicial, law enforcement agencies
2 hours ago