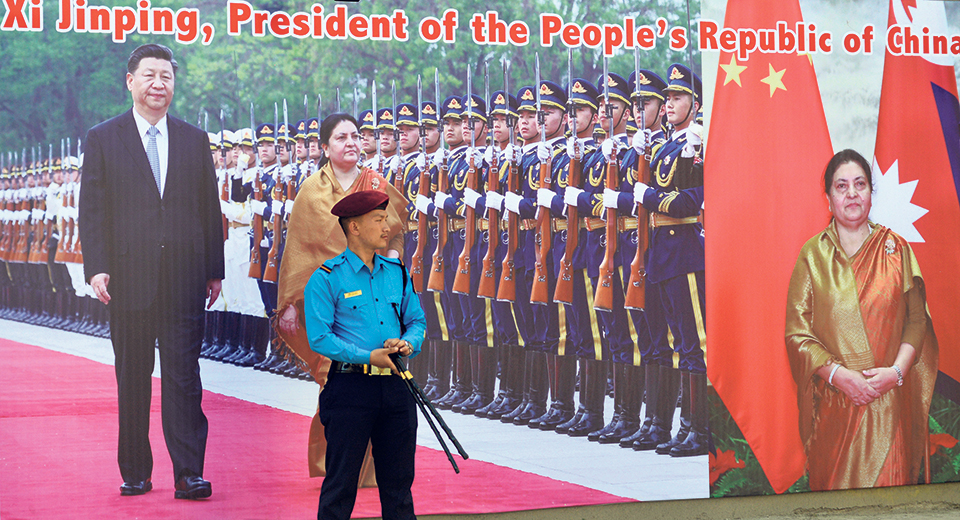 A policeman stands guard at Hotel Soaltee at Kalimati, Kathmandu on the eve of Chinese President Xi Jinping’s visit to Nepal, Friday. In the background is a flex print depicting President Bidya Bhandari and Chinese Presdent Xi. The Chinese president will stay at Hotel Soaltee during his visit here. Photo: Keshab Thoker/Republica

KATHMANDU, Oct 12: Chinese President Xi Jinping is arriving in Kathmandu on Saturday on a two-day state visit to Nepal. The visit of Chinese President after a hiatus of 23 years is being widely seen as a milestone visit from the northern neighbor to further deepen economic cooperation between the two countries.

President Xi is expected to land in Kathmandu at around 4:30 pm from Chennai, India, where he held a summit meeting with Prime Minister Narendra Modi. President Xi will hold a bilateral meeting with his Nepali counterpart Bidya Bhandari at about 6:30 pm before attending the state banquet hosted by President Bhandari.

Prime Minister Oli and President Xi will witness the signing of various bilateral agreements between the two countries on Sunday. A cabinet meeting held on Thursday evening decided to sign over a dozen agreements to develop various projects in partnership with China.

The major agreements to be signed with China include those related to the development of DPR of the much-talked-about Kerung-Kathmandu railway, construction of a 6-kilometer tunnel connecting Tokha (Kathmandu) to Chhahare (Nuwakot) and upgrading of the road up to Syaphrubesi in Rasuwa, according to cabinet sources.

The government has also decided to keep upgrading of Koshi, Gandaki and Karnali north-south corridors -- in order to facilitate cross-country movement with China -- on top of its agenda. Besides early upgrading and operation of the Kimathanka and Korala border points, the two countries are scheduled to reach agreements to lay a cross-country power transmission line and establishment of Madan Bhandari University.

Although discussions on possible extradition treaty between Nepal and China are likely during the meeting, senior government officials ruled out the possibility of signing any agreement on the issue. Nepal and China are also likely to reach agreement on developing Special Economic Zone (SEZ) and reducing tariff and non-tariff barriers to Nepali exports to China in order to reduce ballooning trade deficit.

The visit of President Xi comes in the wake of Nepal failing to expedite implementation of any major projects under China’s Belt and Road Initiatives (BRI) to which Nepal agreed to be part of in May 2017. Earlier, Nepal had trimmed down to nine projects from 35 project of its wish-list at the request of the Chinese side. Nepal and China have also agreed to develop Trans-Himalayan Multi-Dimensional Connectivity Network.

In his op-ed article published in the state-owned The Rising Nepal on Friday, President Xi has expressed hope that Nepal and China can together draw up a new blueprint for bilateral ties apart from renewing friendship and exploring new areas of cooperation during his visit to Nepal. Xi has highlighted the need to further enhance cooperation in various areas including on deepening strategic communication, broadening practical cooperation, expanding people to people exchanges and enhancing security cooperation.

Foreign affairs experts in Nepal are upbeat about the visit of President Xi, who is not just the leader of a neighboring country, but also a leader of the world’s biggest economic power. “The success of President Xi’s visit will largely depend on our success to win the trust of the Chinese side. If the Chinese trust a country and its leader, there is no word called ‘No’ in Chinese dictionary,” said former foreign minister Ramesh Nath Pandey, arguing that Nepal should put efforts to take maximum benefits from the northern neighbor during Xi’s visit to Nepal.

Pandey said the most important part will be one-on-one meeting between President Xi and Prime Minister KP Oli on Sunday. “My suggestion is we should utilize that opportunity to enhance mutual understanding, create an environment of consensus and understand each other’s sensitivity,” former foreign minister Pandey further said.

Many in Nepal also see the visit of President Xi carrying strategic significance as its strategic rival and competitor, US, has also lately stepped up its engagements in Nepal under the pretext of the Indo-Pacific Strategy. “I think the visit carries both diplomatic and strategic significance in the changed geopolitical context. Since the Chinese side has proposed preparing a blueprint of cooperation, we should do necessary homework as to what kind of blueprint we want to create,” said former Nepali ambassador Dinesh Bhattarai, who also served as foreign relations advisor to Prime Minister Sushil Koirala and Sher Bahadur Deuba.

Welcome gates have been erected in various major intersections, roads bedecked with flower gardens, potholes patched and photos of President Xi and President Bhandari have been hung along the roads that will be used to escort President Xi.

Security personnel from the Nepal Army, Nepal Police, Armed Police Force (APF) and National Investigation Department have been mobilized under the command of Nepal Army Brigadier General for escorting and providing security to President Xi.

Nepal Army has taken the responsibility of providing security at Hotel Soaltee from Friday itself. This will continue till President Xi leaves the country on Sunday afternoon. Security sources said special vigils have been maintained at all entry points in Kathmandu and the areas where Tibetan refugees have been living.

President to welcome Xi at TIA
President Bidya Bhandari will reach the TIA to receive President Xi. Sources said President Bhandari is herself visiting the TIA as a gesture of honor to the Chinese president. Sources said Prime Minister KP Oli is also likely to reach the airport to welcome the Chinese president. However, officials at the prime minister’s office said discussions are still continuing whether the prime minister should receive President Xi at the airport.

KATHMANDU, Oct 12: From erecting welcome gates and arches at various places to patching up and painting roads and squares and... Read More...