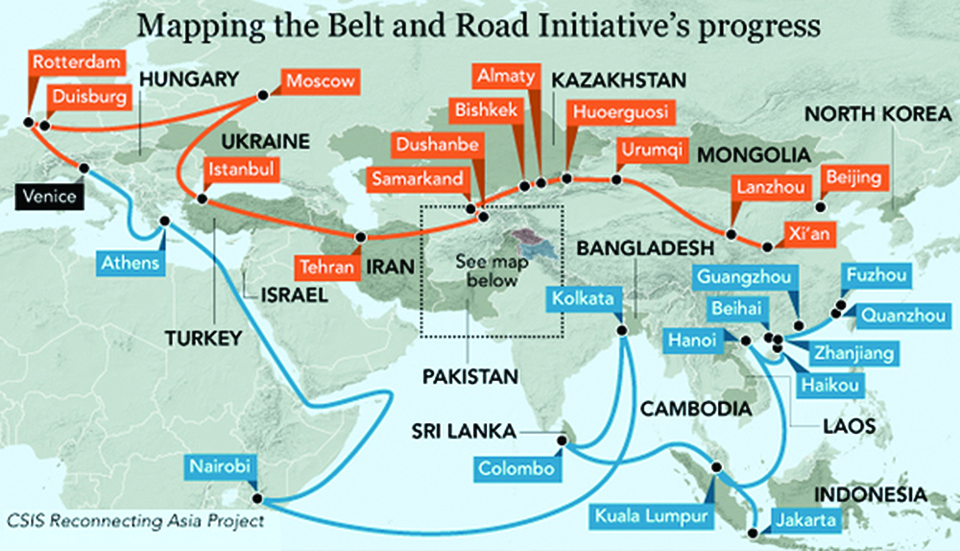 Sharma is culture and language advisor to president Bhandari
news@myrepublica.com

BRI can be an effective mechanism to facilitate bilateral trade, strengthen relations and enable environment to make our people prosperous

Nepal and China have enjoyed mutual respect and friendship for a long time. Nepal has seconded China’s historical and ambitious proposal on One Belt, One Road (OBOR) and remains a staunch supporter of the Belt and Road Initiative (BRI).
Moreover, Nepal’s participation in the BRI goes beyond physical connectivity. The people-to-people relations have opened up opportunities to explore projects and ideas beyond infrastructure development. On Nepal-China relations, Chinese President Xi Jinping said that, “We should promote friendly and pleasant relations among our people by receiving their strong approval and preparing concrete social ground to give this initiative a momentum.”  This call is a proof that the two countries have huge potential to achieve great things, together.
However, there are areas for cooperation between the two countries to lessen Nepal’s widening trade deficit. Easy entry in the borders, favorable business environment for Chinese companies and vice-versa, mutual accreditation for trade opportunities, simplifying custom rules, positive quarantine regulations at the entry points and removal of non-tariff barriers are crucial areas for both countries to consider easing businesses and strengthen our long cherished relations.
Discussing and exploring ideas with academia will also help strengthen knowledge production. Some of these ideas have been discussed between President Bidhya Devi Bhandari and president Xi Jinping during her visit to China last April. The two presidents discussed ways to carry out feasibility studies connecting the two countries via railways.
Chinese president Xi proposed BRI in 2013 to build the 21st century maritime Silk Road. The proposal so far has been seconded by more than 80 countries. In addition to this, several international organizations have signed cooperative memoranda with China on BRI. This says a lot about China’s pivotal role in connecting people across the world, giving them a platform for businesses and contributing to everyone’s well-being.
Nepal should benefit from BRI by exploring areas of cooperation within its framework. The Kerung railway is one such project, and China has proposed to make this a gateway to South Asia. Nepal’s former prime ministers in recent years, during their visits to China and meetings with Chinese officials, have shown firm commitment to BRI by signing trade and transit treaty, joining OBOR and allocating budget to carry out DPR of railways.
A common understanding between the two countries is necessary to get into key principle of the initiative. BRI is not limited to a bilateral agreement. It can be an effective mechanism to facilitate bilateral trade, strengthen relations and enable environment to make our people prosperous.
Respecting and consolidating mutual trust and adjusting existing regulatory frameworks to increase cooperation are one way to move forward. Both governments need to sit for constant dialogues and exchanges of ideas. This includes high level political visits, academia and youth engagements, media exchanges, documentation and publications. Immediate attention should be given to exploring collaborations with all stakeholders: governments, private and public sectors. Both countries want to ensure that their people are happy and prosperous.

Sharma is culture and language advisor to president Bhandari

Narrative of debt trap and specter of colonialism have been deliberately raised to downplay the importance of BRI in this... Read More...