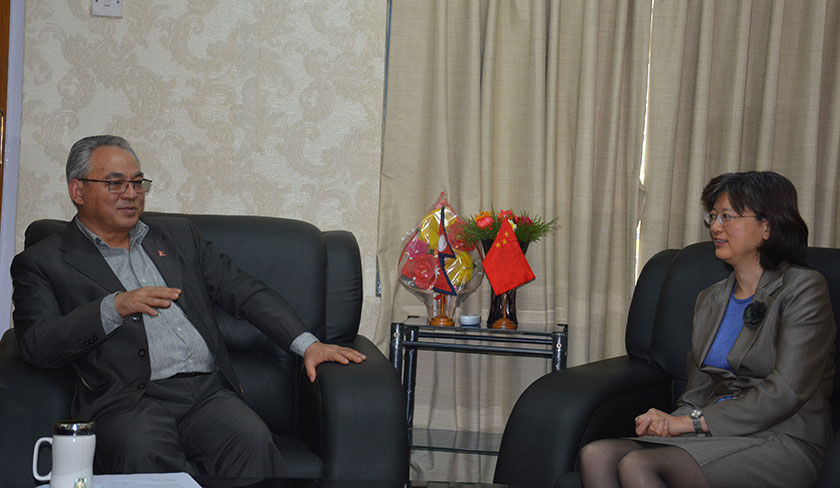 KATHMANDU, June 6: Nepal has requested the Chinese government for its support in combating rising gold smuggling and illegal transaction of US dollars from China into Nepal.

During a meeting with Chinese envoy Yu Hong, who had called on Home Minister Ram Bahadur Thapa on Tuesday, Minister Thapa sought Chinese support to check gold smuggling and illegal transaction of US dollars into Nepal from China via land and air.

Lately, smugglers have been using Nepal as a transit to smuggle gold from China to India. The Rasuwagadhi-Kerung border point has emerged as a major gold entry point.

According to Spokesperson of Nepal Police Sailesh Thapa Chhetri, police records show that gold smuggling is highest from Tibet after the Gulf countries.

In September last year, a team of the Metropolitan Police Crime Division had seized 88 kg of gold which was being smuggled via Kerung entry point and was being taken out of Kathmandu. Also, in August last year, the Central Investigation Bureau had seized 22 kg gold smuggled into Nepal via Kerung.

In April 2017, a Chinese man was arrested by police from Tribhuvan International Airport in connection with the 22 kg smuggled gold.

Responding to the home minister's request, Chinese Ambassador to Nepal Yu assured that she will inform the concerned authorities in China about the request.

During the meeting, the Chinese envoy also handed over a congratulations letter sent by Chinese Social Security Minister to Thapa for his appointment as home minister.

She also said that the Chinese government will continue to provide support, training and other equipment to security agencies of Nepal.

MANILA, Philippines, May 5: Nepal has sought investment from the Asian Development Bank (ADB) on major infrastructure projects that can link... Read More...