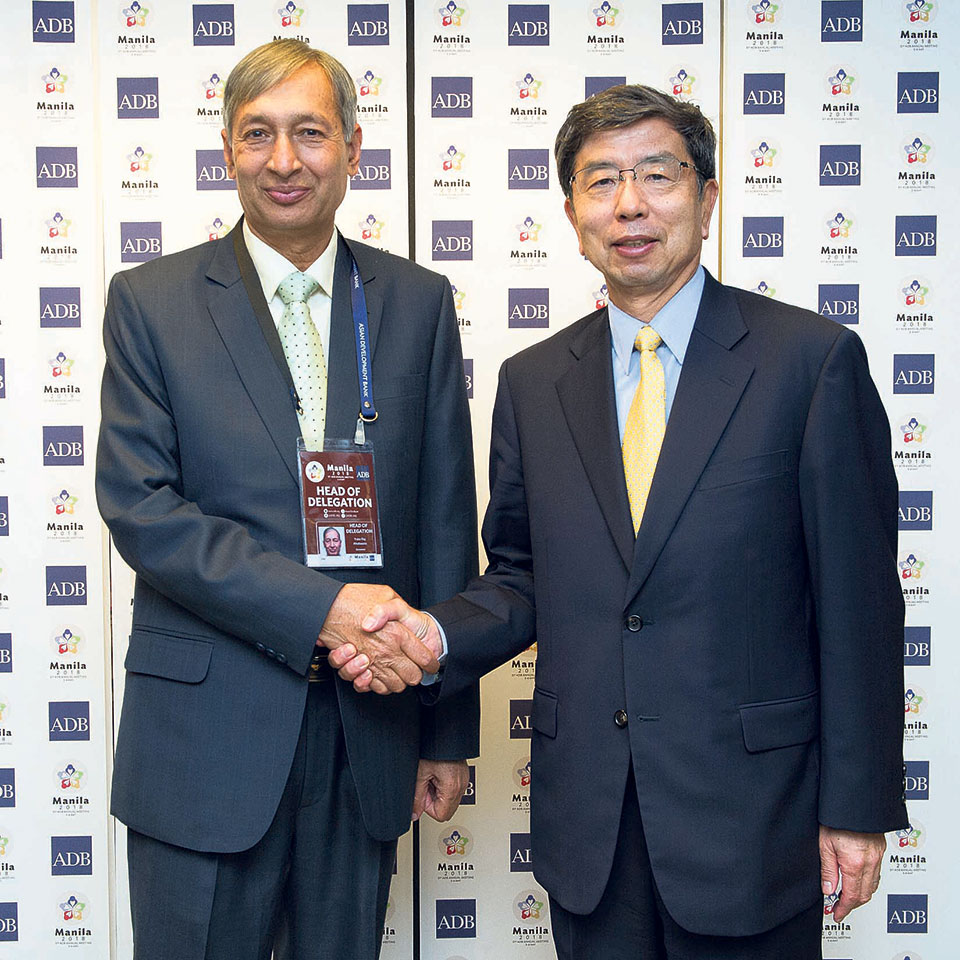 MANILA, Philippines, May 5: Nepal has sought investment from the Asian Development Bank (ADB) on major infrastructure projects that can link urban and rural areas, support the implementation of federalism, provide grants for the earthquake reconstruction efforts, and finance programs to achieve Sustainable Development Goals (SDGs).

Meeting the ADB President Takehiko Nakao on Thursday, Minister  for Finance Yuba Raj Khatiwada, who has arrived in Manila to participate in the ADB’s annual meeting, urged the regional development bank to ‘significantly’ increase the investment portfolio in Nepal.

“During the meeting, I told the president that we want to mobilize all concessional, commercial and private sector windows of the ADB,” said Khatiwada, talking with journalists at the ADB headquarters.

The request to the ADB from the finance minister hints at the government’s intention to prioritize other investment windows of the ADB over grants and concessional window.

“This is the first time we are saying it to the ADB. Earlier, we used to request for only concessional window. However, that is going to shrink gradually and demanding the financing window, which is shrinking, would not allow us to get bigger pie of resources,” he said.

He said that the country does not want to borrow money from the ADB or other institutions to invest on the social and environmental issues.

“In such projects where the pay-ability is not immediate, we want them to come and provide us grant because doing social works by borrowing money from the market is not sustainable,” said Khatiwada.

“The grants should come mainly for capacity development, increasing social return and environmental sectors while project and policy loans should be invested on achieving overall growth and on such sectors where we can repay the loans,” he added.

According to Khatiwada, he has requested the ADB President to increase the investment of the bank on large-scale infrastructure projects with rural and urban linkages.

“I told him that we should not forget the conventional role of the ADB and provide us the support on urban-rural connectivity,” he added.

ADB TO SUPPORT NEPAL FOR FEDERALISM
Meanwhile, ADB’s Director General for South Asia Department, Hun Kim, has said that the regional development bank is interested to support Nepal on fiscal federalism. He, however, did not elaborate whether the ADB would be providing budgetary support or technical assistance.

Addressing a media briefing on Thursday, Kim said that the ADB will decide as soon as possible about the modality and type of support for the country following consultations with the authorities in Nepal. The statement of the ADB’s Director General comes in the wake of reports that the central government in Nepal is facing fiscal deficit following the transfer of the budget to the sub-national governments.

He also said that the ADB’s focus of the support will be on the ‘transformative projects’ in Nepal.

FUTURE OF WORLD ECONOMY, TECHNOLOGY DOMINATES GENERAL MEETING
The annual meeting of the ADB going to be participated by over 4,000 participants including the finance ministers of its member countries, central bank governors, private sector representatives, development partners, academics, members of civil society, and the media is delving into the current global economic order including the risks including protectionism that has threatened integration, trade and business opportunities.

The meeting that kicked off on Thursday with a theme of ‘Linking People and Economies for Inclusive Development’ is also exploring how governments and development institutions can adapt by harnessing new opportunities while addressing challenges presented by an increasingly digital future and how new technologies and globalization will affect job creation in developing Asia.

According to ADB officials, the annual meeting would also discuss its new strategy to meet new and emerging challenges for the region. The latest draft of ADB’s long-term strategy, Strategy 2030, will be discussed at the Governors’ Plenary as ADB aims to finalize the document this year.