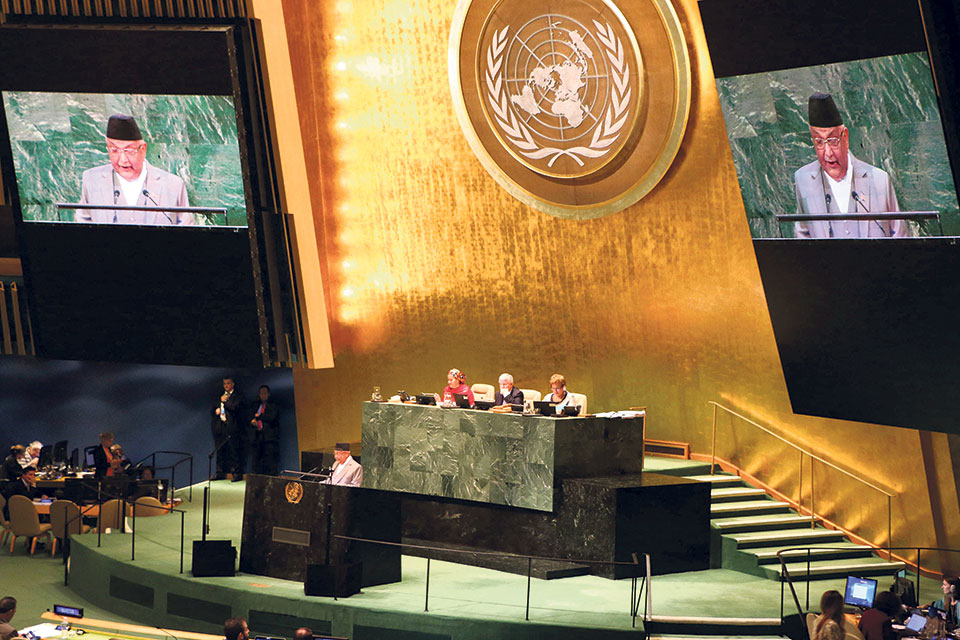 KATHMANDU, Sept 29: Prime Minister KP Oli has said that the conflict transformation in Nepal could be an inspiring success story for the many people longing for peace in different parts of the world.

Addressing the 73rd United Nations General Assembly (UNGA) in New York on Thursday, Prime Minister Oli said that Nepal’s ending of the decade-long Maoist conflict through peaceful means is a unique example of peaceful and democratic transition. “It is a telling testimony that dialogue triumphs over differences; and ballot triumphs over bullets,” he said.

The prime minister said that the political leadership in Nepal steered a uniquely successful home-grown, nationally led and owned peace process through dialogue and deliberations. “It was about peaceful transformation of an armed conflict. It was about restructuring of the State and promoting unity in diversity. It was about making Nepali people truly sovereign and as source of state power,” he said. “It was about institutionalizing and consolidating all those achievements in a democratic constitution through a popularly elected Constituent Assembly.”

While stating that Nepal’s commitment to the protection and promotion of human rights was total, Prime Minister Oli said its ongoing transitional justice process respects the comprehensive peace accord as well as the ground realities for sustaining peace and delivering justice. “We will not allow impunity in serious violations of human rights and humanitarian laws,” he said.

Oli also said that Nepal holds development, democracy and respect for human rights as independent and mutually reinforcing and that Nepal as a member of the Human Rights Council will continue to play a constructive role to deliver on the Council’s mandate.

Prime Minister Oli said that the internationally agreed commitment to achieve the Sustainable Development Goals (SDGs) 2030 in the Least Developed Countries (LDCs) had been below expectation. “The impact will be fully realized only when external support measures respect national ownership and leadership, are aligned with national priorities, come through national system, while they help build productive capacity, job creation and develop human resources,” he added.

The prime minister also highlighted the problems faced by the poorest and most vulnerable countries due to climate change. While stating that the impact of climate change on mountain and small island countries has been felt as an existential threat, he called for matching and robust responses from countries that can help extend support to tackle these problems.

Highlighting the uncertainty brought about by the reemergence of cold war rivalries, he said questions were being raised from various quarters over multilateralism.

Oli also said that Nepal underscores the centrality of the United Nations as the most legitimate multilateral forum to deliberate on the challenges that all countries confront today. “The problems that we confront today at global scale can only be overcome by global collaboration and partnership in absolute trust and confidence,” he further said.

On the occasion, Prime Minister Oli also stressed the need to make the international system a truly inclusive one that promotes fairness, equality and justice for all states irrespective of their geographical and economic size. While welcoming the Secretary General’s initiative on Action for Peacekeeping, Prime Minister Oli demanded that troop and police contributing countries must be given fair opportunities to serve in leadership positions both at the headquarters and in field mission.

While stating that Security Council reform was long overdue, Oli said that any reform must reflect the current realities and ensure justice to historically under-represented and developing countries. He welcomed the reforms undertaken in the peace and security architecture as well as in the management of the organization.

PM Oli urges not to engage in gambling during Tihar

KATHMANDU, Oct 29: Prime Minister KP Sharma Oli has urged one and all not to involve in immoral and illegal... Read More...

KATHMANDU, Oct 30: Doctors involved in Prime Minister KP Oli’s treatment have said that he will have to remain in hospital... Read More...