Nepal made to wait for qualification after disappointing loss to India 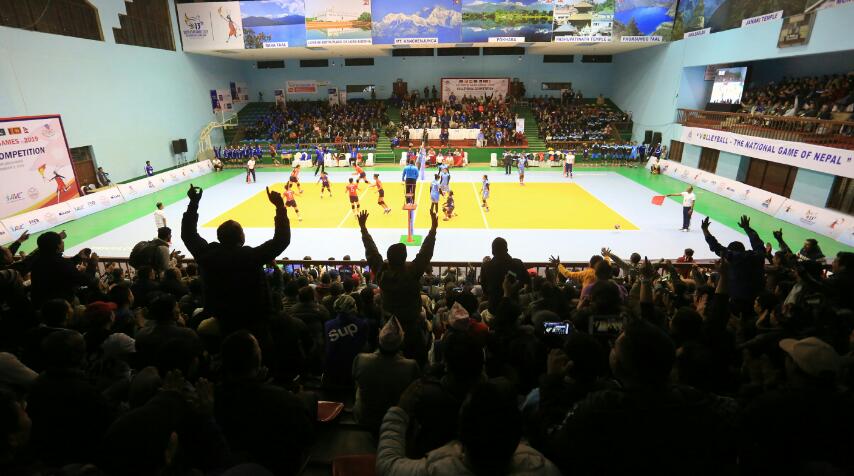 KATHMANDU, Nov 29: After a terrific straight sets 3-0 win over Bangladesh a day ago, Nepal national women’s volleyball team suffered a disappointing 3-0 at the hands of contender India in volleyball at the 13th South Asian Games (SAG) on Thursday.

The game saw Nepal fail to recognize the attacking threats posed by the Indian players, and also faring poor with the block and receive, which propeled India to a convicing first win of the competition, 26-24, 25-12, 25-16.

In its second Group A played at the National Sports Council’s covered Hall, Nepal started the game brightly taking a 21-23 lead at one point, but eventually lost the set 26-24.

The first set loss went down to a mistake from head coach Jagadish Bhatta, who replaced Reshma Bhandari for Niruta Thagunna in the latter part of the first set. It was an end to end set where Nepal used captain Aruna Shahi’s technique to take a good lead.

Then, India started to make the comeback after that with the mistakes in the last three plays in the first set which saw the score going from 19-22 to 26-24.

Then, it all went downhill from the second set for Nepal with mistakes in block and receive along with that one subtitution early in the first set. The services from Nepal was not at all pleasing to the eye, with most of the ball either being received properly or hitting the net.

India started to catch the pace as soon as Nepal looked nervous with its delivery and eventually took a stunning lead of 16-7. Nepal got two points after that taking the score to 16-9, but poor spiking performance from Pratibha Mali cost Nepal the set as well. Nepal lost the second set after a collective attacking approach by India.

The third set was not much different from Nepal with a couple of services going out of the frame of play and the issue lied again with the block and receive that Nepali players could not improve throughout the game.

Main players Mali and Bhandari were not able to judge the ball, being confused in most of the plays and the spike not being able to find an open space for the team to get a point.

Almost every shots were picked by the Indian women as they figured out Nepal’s weakness and prioritized in blocking. Nepal, however, could not block well and the defensive aspect of the game was below par.

At one point, the score was 8-2 in favor of the visiting side with Mali costing Nepal points after poor receive.

Saraswati Chaudhary tried to get some good spike in middle of the third set, but Nepal could not recover completely in the set and eventually lost the set 25-16.

Both Nepal and India have three points so far in Group A, but Nepal has played both its game, while India has a game against Bangladesh left on Friday. The top two teams of the group will reach the semifinals.

In men’s category played earlier on the same day, Bangladesh has suffered a straight sets defeat of 25-18, 25-14, 25-15 at the hands of India leaving the group’s fate hanging perfectly in the balance as Nepal men’s volleyball team faces India on Friday to decide who goes through.

Coach Bhatta said that Nepal lost the game despite playing well in the first set, and played with high confidence against India.

“We played against India on pressure. We were good in the first set, but we could not win despite taking the lead,” Bhatta added.

KATHMANDU, Dec 2: Contenders India and Pakistan will face off in the final of men’s volleyball at the 13th South Asian... Read More...

KATHMANDU, Nov 27: Thirteenth edition of South Asian Games has begun with the match between Nepal and Bangladesh under women... Read More...