Nepal, India to care for each other's nationals headed homeward 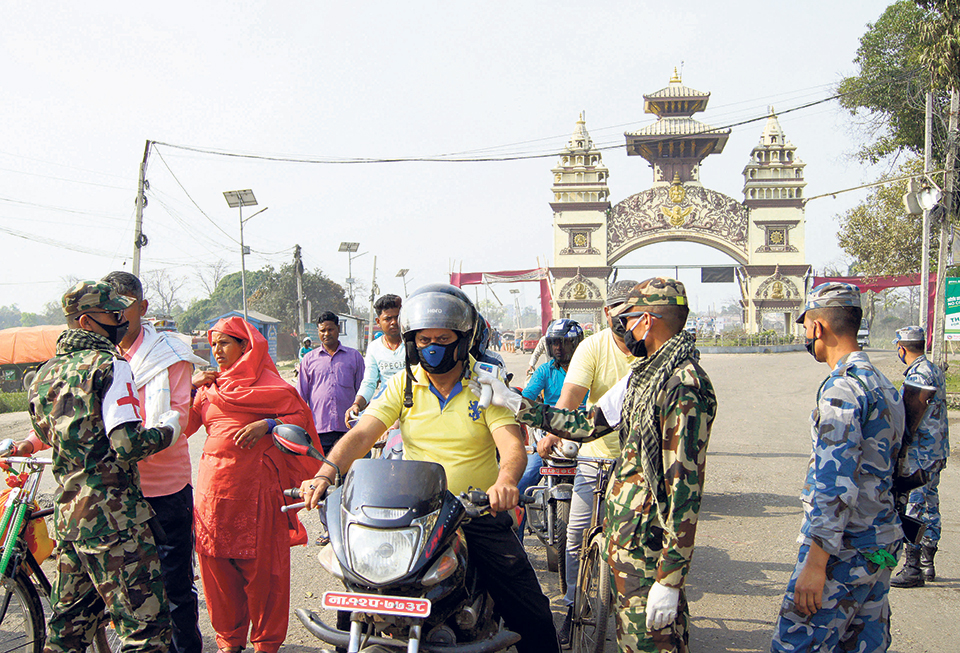 Won't allow cross-border movement until lockdown is over

KATHMANDU, April 1: Concerned over the further spread of COVID-19 as a result of unabated cross-border movement of migrant workers, Nepal and India have reached an understanding to take care of each other's nationals who are already assembled on no-man's land and effectively control all cross-border movement until the lockdown period is over.

As per the understanding reached between higher political authorities and local level governments, the respective governments of the two countries would provide all basic needs such as food to those trying to make it to their homes across the border and ensure safe 'quarantine' for them so that they do not become a factor in transmitting the covonavirus.

The agreement has already been implemented in some places and is kicking in at the remaining places where migrant workers have converged to travel on to their homes across the border, according to aides to Prime Minister K P Oli.

Oli's foreign affairs adviser Rajan Bhattarai said the two countries have reached an agreement to hold those trying to cross the border back on their respective sides of the border, as allowing them to travel onward would entail greater risks of spreading COVID-19.

"As per the latest understanding reached between the two countries, the Indian government is to ensure proper management of all Nepali nationals living on the Indian side of the border, while the Nepal government will take care of Indian nationals who have been stopped on the Nepali side," said Bhattarai.

He said the agreement was reached after negotiations between the two countries both at higher and local levels. "This decision has already come into implementation in some places like Dharchula. It will be implemented in other places as well," he further said.

Thousands of Nepali migrants from India arrived at various border points in order to get to their homes as India enforced a 21-day nationwide lockdown on March 25 -- a day after Nepal enforced a similar lockdown here. But as the Nepali authorities denied them entry into Nepal citing the COVID-19 threat, various rights organizations and civil society bodies accused the government of preventing its own citizens from coming home.

On Wednesday, hundreds of Nepali migrants, who arrived at the Mahakali bridge in Dharchula, staged a protest against Neapli security personnel for not allowing them to enter into Nepali territory. They were left in great despair after the Indian side for their part locked down the areas where they were stranded.

Earlier, police made a baton charge after hundreds of migrant workers stuck in Kanchanpur tried to enter the Nepali side of the border. They were eventually allowed to enter following mounting pressure from politicians within both the ruling and main opposition parties.

Experts, however, cautioned the government that allowing migrant workers to come home during the nationwide lockdown would undercut the purpose of the lockdown, which is aimed at containing transmissions of the virus by restricting people's movement. "There will be a risk of failure of the purpose of the lockdown [if the cross-border movement is allowed further]," said Dr Sanjib Kumar Sharma, who heads the Internal Medicine Department at the BP Koirala Institute of Health Science in Dharan.

As Nepali migrant workers continued pouring in across the border areas even as all passengers vehicles in India stayed off the road and train services suspended their operations under the 21-day nationwide lockdown, Nepal opened diplomatic channels to resolve the standoff. Nepal had proposed keeping each other's nationals who had reached the border at quarantine centers established as agreed earlier between the two countries.

Foreign relations advisor Bhattarai said there will be no cross-border movement from either side until the lockdown period is over. "This is the protocol set down by the World Health Organization in order to contain the possible spread of the coronavirus," he further said.

The government has asked all Nepali citizens abroad to stay where they are, while directing all its diplomatic missions to provide them necessary assistance to facilitate their staying put during the lockdowns. Officials said Nepal's borders both with India and China will be closed except for cargo movement until the government decides to lifts the nationwide lockdown.

Govt, ASDP and NACCFL sign deal for capacity buildings of cooperatives in Karnali
53 minutes ago