Nepal in Namibia: Hits and Misses 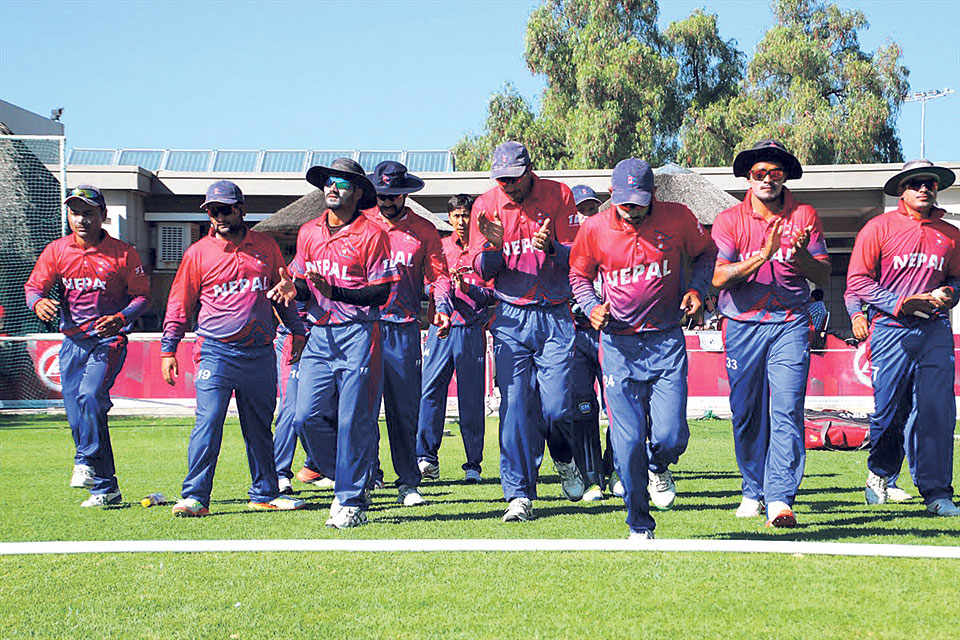 Youngsters impressed for Nepal led by iconic skipper Paras Khadka. The lower-order batsmen helped give some of the most epic finishes in Division Two history. International reporters covering the event described the matches as the most exciting ones they ever observed on the ground.

The World Cup Qualifiers is round the corner. Here are some of Nepal cricket’s hits and misses from the Division Two:

Hits
1. Paras Khadka
The Nepal national cricket team skipper Paras Khadka was in sensational form throughout the tournament. Khadka was the highest run scorer of the tournament with 241 runs from six matches.
He scored them with a strike rate of 88 runs per 100 balls with a century in the final playoff match of the division. His unbeaten 112 runs went in vain as he could not prevent the seven-run defeat by the United Arab Emirates (UAE) on Thursday. He smashed 11 fours and 15 sixes in the tournament including eight in the final century innings.

2. Rohit Kumar Paudel
Nepal’s punt on young players in the team to Namibia in light of their performances in the Everest Premier League (EPL) and the U-19 national team proved successful.
The best batsman of the lot, Rohit Kumar Paudel, impressed with his temperament to score runs under pressure.
From his mature batting performance throughout the tournament and when he registered his top score 47 runs in a three-wicket win over Kenya, to accumulating the second highest runs for Nepal with 140 runs from six matches, Paudel has made a strong case to be a finisher in the Nepali middle order.

3. Sandeep Lamichhane
A new sensation of the Nepali cricket team, Sandeep Lamichhane, who was bought by the Indian Premier League outfit Delhi Daredevils (DD) recently, was adjudged the best player of the tournament.
He claimed 17 wickets in six matches and registered best bowling figures of 10-5-20-5 against Kenya.
He bowled a total of 54.2 overs in the Divison Two and had an overall economy rate of 3.23 runs per over including nine maiden overs in the tournament.
He starred with bat too staying not out at the other end preserving his wicket and rotating the strike to Basant Regmi and Karan KC to give Nepal a wicket win against Namibia and Canada each.

4. Sompal Kami
Sompal Kami was the second best player for Nepal in the Division Two as far as the bowling is concerned. Kami picked up 10 wickets in the six matches making early breakthroughs with the new ball.
He picked up four wickets against the UAE in the group stage match and had an economy of 4.28 in the game. He bowled total 48 overs in the tournament and had an overall economy of 4.79 with four maiden overs.
Not only his bowling, Kami contributed with bat too scoring crucial 10 runs in the three balls he faced to secure a victory against the UAE.

Misses
1. Gyanendra Malla
As one of the senior batsmen in the relatively inexperienced batting order, Gyanendra Malla disappointed at the top order.
He hit 69 runs in the six matches and had a strike rate of 50.36 with the highest score of 24 runs against the UAE in the final.
His younger opening partner Dilip Nath (75 runs in five matches), in his second tour with Nepal, outscored him in the tournament where conditions were hostile to bat against the new ball.

3. Karan KC
Karan KC became a country-wide sensation in a night when he delivered the ‘miracle’ win for Nepal against Canada with his bat, but the bowling all-rounder struggled to put decent numbers with ball.
He took mere two wickets in the tournament in six matches, and had an economy of 5.17 bowling 39 overs.
He salvaged Nepal with an incredible win against Canada which decided the fate of the Nepali team to reach the qualifiers. He smashed unbeaten 42 runs off 31 balls in a last wicket stand with Lamichhane and staged a nerve-wrecking finale bashing three boundaries and four sixes.

KATHMANDU, Feb 9: A conservative batting approach by Nepal chasing the target of 139 set by Namibia saw them win the... Read More...