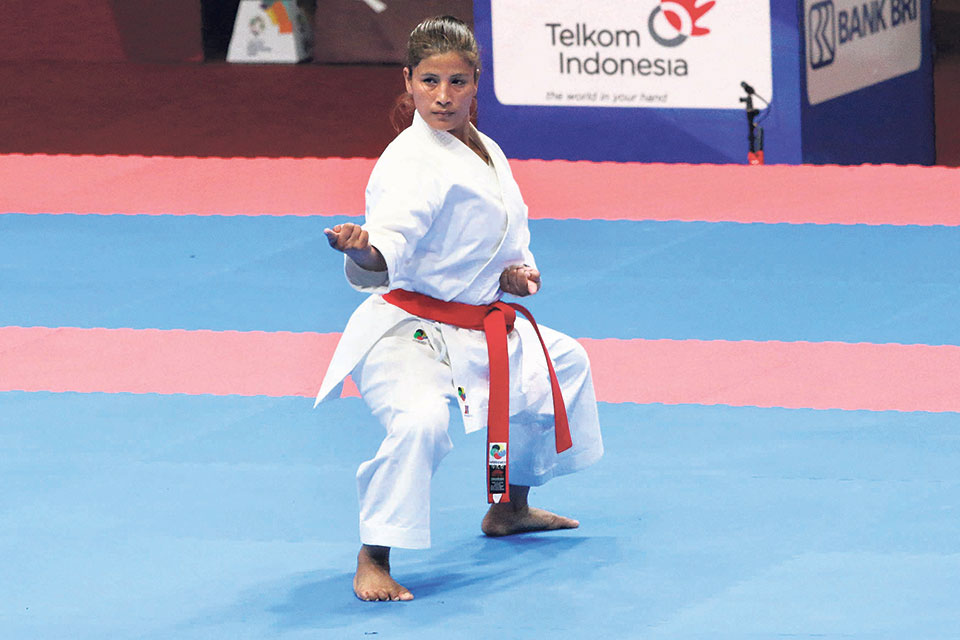 KATHMANDU, Aug 26: Nepal’s hope of winning its first medal at the 18th Asian Games were dashed as Rita Karki suffered a 3-1 defeat at the hands of Pakistan’s Nargis in the women's 68 kg weight category.  Karki lost the fight for bronze medal in karate played at the Jakarta Convention Center in Indonesia on Saturday.

After being unsuccessful to win bronze medal for home, Karate Coach Deepak Shrestha said that lack of international exposure we failed to kiss historical bronze medal.

"This is a golden opportunity for us to win medal for home but we failed to archive milestone as Karki suffered lack of international match exposure in the bronze medal fight," Coach Shrestha added.

Similarly, Nepal met disappointment again as Chanchala Danuwar faced a 5-0 defeat at the hands of Monsicha Tararattanakul of Thailand in the women's Kata bronze medal fight. Tararattanakul further went on to win a silver medal at the Asian Games.

In men’s kata, Parshu Ram Bastola suffered a one-sided 5-0 defeat at the hands of Adham Hashem of Qatar.

Marathon
Nepal sprinters had a poor day in marathon as Krishna Bahadur Basnet and Gopi Chandra Parkhi failed to finish the race. Both, Basnet and Parkhi gave up after running 40 km and 30 km respectively in a 42.195 km race.

In women's light weight category, round of 16, Punam Rawal went down to Wenlu Yang of China by 5-0.

In the men’s light weight 64 kg category, round of 32, Tej Bahadur Deuja faced 3-1 defeat at the hands of Khamphouvanh Khamsathone of Philippines. Similarly, Bhupendra Thapa was defeated 4-0 by Jordan’s Obada Alkasbeh.

Badminton
In the men's doubles category in a match played at GBK Istora, the Shrestha pair of Bikash and Nabin went down 2-0 from the Malaysian pair of V Shem Goh and Wee Kiong Tan.

They conceded 21-9, 21-12 defeat from the Malaysian pair in the round of 16. Bikash and Nabin had defeated Mongolian pair of Temuulen and Sumiyasuren by 2-0 last Thursday to reach the last 16.

Sports Climbing
The debut for Nepali players in sports climbing ended in disappointment as Pemba Sherpa and Pranil Man Shrestha failed to secure their places in the next round of men's combined category at Palembang.

Sherpa finished at the 19th spot and Shrestha ended his journey at 20th spot in the 23-player event.

Archery
Nepal went down to Chinese Taipei 6-0 in the Recurve Men's Team in GBK Archery Field, Jakarta. Nepal suffered a triple 2-0 defeats at the hands of Chinese Taipei in the quarterfinal.

Earlier, Nepal had registered a 6-0 consolation victory over Qatar in the round of 16. They defeated Qatar by the same score.

Paragliding
Paragliding made a good start in the first round of the cross country category improving their performances from accuracy.

Sepak takraw
Nepal suffered a 2-0 defeat at the hands of Malaysia in the men's regu preliminary round in the JSC Ranau Hall.

JAKARTA, Aug 30: Nepal’s Nabita Shrestha has presented a mixed result in women’s singles of table tennis as she lost in... Read More...

JAKARTA, Aug 24: Nepal’s badminton team build on their success against Pakistan as they beat Mongolia in men’s doubles and... Read More...

Nepal’s trade deficit grew by around 25 percent to Rs 1.26 trillion in first 11 months of current FY
22 hours ago
As a Dalit girl is denied a room to rent, an int’l report highlights poor representation of Dalits in  state’s judicial, law enforcement agencies
16 hours ago